I’m always drawn to unsolved murder cases, especially those involving children. Last March, I wrote about the Boy in the Box. Now there’s another one.

On Monday, October 29th, a fisherman found the remains of a little girl on an island in West Galveston Bay, Texas. She was wrapped in plastic and stuffed into a plastic storage container. She was wearing a pink outfit from Target, and white and purple tennis shoes from Walmart.

“Baby Grace,” as she has been named by the investigators, is estimated to be between 2 and 3 years of age. She was a little less than 3 feet tall, weighed approximately 25 pounds and had long blond hair. An FBI forensic artist drew these sketches of her: 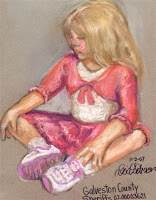 According to the Galveston County Medical Examiner’s Office, Baby Grace had been dead for at least two weeks. She had a skull fracture, but no sexual trauma. No cause of death has been released, but investigators are treating the death as a homicide.

Investigators are focusing first on obtaining the girl’s identity. Because Galveston is a tourist destination, that might be difficult. Police personnel and the FBI are going through missing person reports from across the country. After the sketches were released, hundreds of calls began pouring in. Each one must be investigated. Several callers think the child’s body might be that of Madeleine McCann who disappeared in Portugal in May. Because of the circumstances, however, investigators do not believe it’s her.

Investigators are having a tough time dealing with this case. According to Sgt. Mike Barry, “It’s been an emotional roller coaster for us.” One report stated that the two deputies who waited with the body until investigators arrived on October 29th, still could not talk about the case. Maj. Ray Tutoilmondo, the spokesman for the Galveston County Sheriff’s Office stated, “The name Grace means given. She’s given us, in her death, emotions we don’t get to experience very often.”

Email ThisBlogThis!Share to TwitterShare to FacebookShare to Pinterest
Labels: Baby Grace, Crime, Joyce, Police, The Boy in the Box

What a moving case, Joyce!

Have you considered writing a book about unsolved children's murder cases?

Geez, what a horrendous story. It's bad enough what adults can do to other adults, but the beasts that harm helpless children really get to me.

Heartbreaking. I find myself trying to imagine what the parents went through. Assuming the child was murdered by one, no doubt in a moment of stupid rage, then buying a new dress & pretty sneakers and the plastic bin for a secret, guilt-ridden burial---and then the protective and determined anger of the police--wow. My mind just spins with all the emotions.

It's a sad case, Joyce, just as the Boy in the Box.

I hope that Baby Grace eventually gets the peace she deserves.

These unsolved cases about children can be the most baffling...and the most difficult.

Tory, I've thought about writing a true crime book, but I need more hours in the day as it is.

You missed it, but the case we went over at the meeting the other night would make a riveting book. The girl who was murdered was kicked out of her house at 15, made a sex slave by her boyfriend who was planning to be a cop, etc.

Nancy, I do think the child was killed by one or both of her parents. If she'd been kidnapped, I think the police would have made an ID by now. Sooner or later, though, someone will notice that this little girl isn't around anymore. That's the tip they're waiting for.

Why do murdered children always look so cute and lovable? It makes it even harder to understand why anyone would do her harm. If the cause of death is a fractured skull, I'm betting she was accidentally killed by a family member or caretaker who panicked and got rid of the body. Sooner or later, someone will notice that she's gone -- a grandparent, surely, or a neighbor.

Joyce, thank you for that moving tribute to Baby Grace. I have no doubt that she's in heaven. And for the deputies and law enforcement to whom she was *given*, they too are in my thoughts and prayers. This has now become personal and her case will be the fabric of what they bring home to their families and future investigations.

Apologies to artist Lois Gibson but I have made minor changes to her sketched Identikit of Baby Grace to make her look more human and less corpse-like. Visit http://baby.grace.50megs.com