The dangers of being a journalist

Some journalists risk their lives in war-torn countries.

Anderson Cooper has my ultimate respect. He appears in the middle of the worst conflicts, wearing his flack jacket that wouldn't do a bit of good if a bomb exploded anywhere near his head. I don't even know what a flack jacket does other than make the reporter look cool. In Anderson Cooper's case, he is already handsome and intellectually fascinating and rich as can be. Does he need to look any more interesting than he already is?

But I contend that reporting on domestic issues is equally dangerous to a reporter's health. Imagine those who embedded themselves in the 9/11 rescue or Hurricane Katrina? I can't remember which reporter it was, but in order to get the Katrina story he plunked himself in the middle of New Orleans as the levees were breaking. "Look,viewers, the levees are giving way. Soon I will be stranded on this house." Huh? That's just stupid.

I for one am a coward, so it was to my great surprise that my latest reporting job for WQED (December cover story, Pittsburgh Magazine) turned out to be life threatening.

The assignment seemed innocent enough; I was to do a Christmas feature on Bob Sendall of All In Good Taste Production. Bob is an incredible event artist, producer, chef and all around entertaining guy. His parties are legendary and if you hire him you are guaranteed to get a unique event.

The editorial staff, with Bob's blessing, decided to feature his Christmas tradions. Bob agreed to decorate his home (in October) for Christmas and give us his menu for Christmas morning brunch.

I interviewed him before the shoot and decorations had begun. We talked about his German grandmother's stollan, growing up in Scott where four families would jointly decorate their homes with one theme, then do a progressive day of dining at each other's homes. His mother served the breakfast, his Grandmother made the stollan and thus began his tradition.

Just before I was leaving he said he wanted to show me his newest venture, a chocolate business called Toffee Taboo. Bob's signature dessert for more than 10 years had been this chocolate and at the urging of his clients and friends he finally decided to package and sell it. Bob Kolano did a fabulous box and orders were just starting to come in. 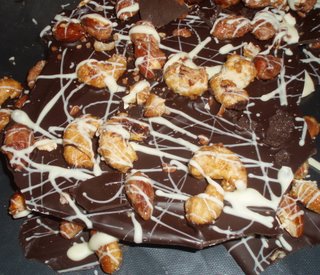 As I was leaving, he gave me a box and with a wink said. "I've been told it's addctive."

No problem, I thought. I don't like chocolate.I knew my husband would be thrilled however because he is a chocoholic.

With Route 65 being closed, the drive home became tedious. I eyed the box sitting beside me in the passenger seat. The metalic print "Toffee Taboo" twinkled in the afternoon sun.

I slid open the lid just a crack and spotted the nuts. That's good protein, I rationalized. I broke off apiece of cashew and popped it in my mouth. There was just the tiniest bit of chocolate attached to the nut, but it hit me like that first shot of heroin must hit an addict. I broke off another piece, this time with more chocolate. By the time I got home, I had eaten the entire top layer and was desperately trying to stop myself from starting on the second.

I rushed in the door holding the box as if it were a dirty bomb and threw it at my husband. "Hide it. Please. It's chocolate."

Steve gave me a puzzled look. "But you don't like chocolate."

He later told me I looked like a serial killer, only in my case there was chocolate, not blood smeared on my face and hands.

I spent the next three days looking for that hidden box of chocolate. Thank God I didn't find it. By the time the photo shoot had arrived I was detoxed. 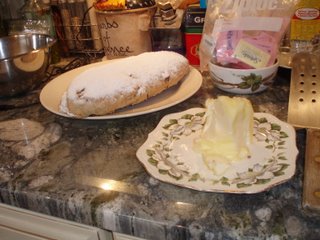 Posted by Working Stiffs at 6:22 AM

Email ThisBlogThis!Share to TwitterShare to FacebookShare to Pinterest
Labels: Judith

I LOVE Toffee Taboo!! But where the heck can I buy it?? I'm hoping it will be more available this Christmas!

I'd better stay away from that stuff!

Bob Sendall is a magician in the kitchen...I've had the pleasure of dining on his fabulous cuisine several times over the years. I can easily imagine that his Toffee Taboo is truly divine. Looking forward to reading "the rest of the story," Judith (our own intrepid, fearless, light-fingered journalist!).

I've never heard of Toffee Taboo, but I'd sure like to....Yumm!

Uh-oh. I think I'd better not go NEAR this.

But I'll gladly read about it when my mag arrives. (So the stollen got you, too, Judith? Is that what the hint is about?)

Cute, Judith. But how will I spend the time waiting for this cliff hanger to end?

How many calories did I take in reading about the chocolate?

Can't wait for the next installment...