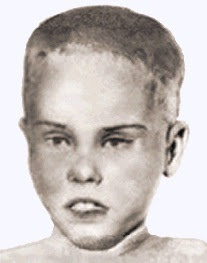 A fascinating article caught my eye earlier this week and I haven’t been able to let it go.

On February 25, 1957, the body of a young boy approximately 4 to 5 years old, was found in the Fox Chase section of Philadelphia by Philadelphia Police officer Elmer Palmer. Police had received a call that there was something inside a J.C. Penney bassinet box that someone had thrown away. The subsequent autopsy showed that the blond haired boy was undernourished and had been abused. The cause of death was head injuries.

I think what intrigues me most about this case is the dedication of the investigators involved. Some of the retired detectives working on this case were the original officers assigned to the investigation. Many of them have worked on their own time studying evidence, looking through hospital records and interviewing witnesses. These seasoned cops remember this boy as if he belonged to them--and in a way he does. Fifty years later, they still attend memorial services at the gravesite.

As writers, these elements are all the things we should be putting in our own work. A victim that tears at your heart, numerous suspects, and detectives that won't give up. Unfortunately, this story is all too true. Maybe someday it will have if not a happy ending, at least a satisfying one.

How would you have this story end? Will there ever be justice for The Boy in the Box?
Posted by Working Stiffs at 7:05 AM

Email ThisBlogThis!Share to TwitterShare to FacebookShare to Pinterest
Labels: Joyce, The Boy in the Box

This is indeed a heartbreaking tale. I was reading a newspaper account in which someone stated that the boy has been shown more love after his death than he likely ever experienced in life, from the extent of the abuse evident on his tiny body. How truly sad.

I hope the detectives can give him a name. After the exhumation, he was reburied in a lovely spot, but wouldn't it be nice to have a name to go on his headstone. Saddly, after all this time, what are the odds???

Joyce, this is a haunting case, for certain. It's touching to know that officials still attend memorials for him.

I once read a similarly haunting story about a young boy who lived with his mother's corpse for a time because he was afraid of what would happen to him if he reported her death.

It's so sad that someone could discard a child like that and not come forward after so many years. The dedication of the investigators, though, is admirable, and I hope they can find the solution to the puzzle and let him rest in peace.

Joyce, what a heartwrenching story. In many ways, it seems that they were so close to solving the case, like they were just on the brink! I am drawn to the idea of the blue cap found near the remains. Wondered if they still have it and if any DNA, hair, sweat, skin was found on the cap. With DNA technology today might they find out something about a possible killer who may be lurking in some database? Very intriguing story, well described by you. Well done. Would that he find peace and justice--Your sister, Amy

My mother told me of this story and the emotion in her voice as she remembered it as if it happened yesterday led me to research the case for myself. It's so true that you can't let the haunting image of that tiny boy's face.

Somehow I can't help but feel that the Ohio woman who has provided so many believable clues should either cough up the rest of the information she knows or be tried as an accessory to murder. The website states that the investigators believe she's withholding a lot.

Regardless of her problems, the number of people who were directly involved in the case 50 years ago is dwindling. If she has more information to give to investigators, doing so might release her from some of her inner demons before she passes on. The investigators deserve to know and the little boy deserves his earthly identity.

I know. I wrote a book about it. This story changed my life.

This case is so incredibly sad. That poor little boy must have had a terrible life judging by how he was found. I saw the 48 hours rerun a couple of weeks ago and I haven't been able to get him out of my mind since.

As heartbreaking as it is, I'm not really confident that this case will be solved. His body was discovered over fifty years ago. Chances are, the person or people who are responsible for his death are likely dead themselves now. I would really like to see this case get solved and that little boy get some justice, but as more time goes by that becomes even more unlikely.

I can't get this childs face out of my mind since i have read up on this.
Why can't this case be solved?
My heart goes out to this little boy, and i hope i am still around to see the person/persons punished for this evil evil crime.
My stomach has been flipping over and i have not been able to sleep.
This detectives are worth their weight in gold, if it has affected me this badly after just reading about it, well to work on the case must have been truely awful for them.
I reckon that this little boy was not american, and that other cases of missing children around this time all over the world should be looked in to - to see if any connection can be made.
I hope from the bottom of my heart that this case is solved.
Annie