Middle aged men should not be permitted to buy cars. To be specific, they shouldn't be allowed to buy police cars. Our department just purchased the world's ugliest police car. It looks something like this, except without the NYPD logo.

What were they thinking? A Dodge Charger with a V-8 engine and mag wheels. Whoever heard of a Dodge Charger for a police car? Police cars are Crown Vics, or Impalas like our other cars. 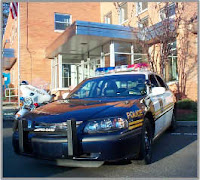 The only reason I can think of is midlife crisis. The guys who pick the cars are no longer twenty five year old rookies. Their personal vehicles are trucks so large they don't fit into the slots in the parking lot. They are waxed to perfection and heaven forbid they get a spot of dirt on them. I'm sure their wives aren't allowed to drive them. They've been banished to the minivans full of toys, sippee cups and stale Cheerios.

To their credit, the other new police car is an Expedition. Now that makes sense to me. A four wheel drive behemoth can come in handy during our long Pittsburgh winters. What are they going to do with the Charger the four or five months of the year when there's snow and ice on the ground? Put it in the garage for the winter? Obviously this was not a well thought out purchase. And did I mention the car is ugly? The only car we had that was worse was a Dodge Neon. We used to call that one the Clown Car.

My solution? A woman should be in charge of the police car purchases. Like me, for instance. If I were choosing the car, I'd be looking at practical things. You'd never hear me saying, "Dude, this car is so cool!" I'd want to know how well it handled in the snow, not how nifty the skid marks look when you hit the brakes. Is there enough room for the equipment or is the laptop really going to be in my lap? Am I going to hit my head on the video camera when I get into the car (yes that is what happens!)? Does the shotgun fit over the rear window or is the back of the car too small?

See what I mean? I'd at least make sure the cars had enough cup holders.

I'm afraid if they don't put me in charge, the next car will look like this:

Heaven help us.
Posted by Working Stiffs at 6:45 AM

Hey, Joyce, you know what they say about boys and their toys. Everyone wants to be like Jeff Gordon. Vroom vroom.

Actually the General Lee might not be a bad idea. Can it jump over the traffic jams on the Parkway?

It's not only the boys! My mom insisted that her GM Firebird WAS more practical than, say, a hatchback.

But she also mentioned the cute teenage boys revving their engines next to her at traffic lights.

You tell me which was more important.

Hm, maybe the G.L. isn't such a bad idea. How would it do in the snow? If the guys start singing that song though, I'm outa there.

Gosh, this brings back memories. We used to have a couple of Dodge Chargers back in the day (I won't say when that day was, but I still had a full head of hair). We used them for running radar and they were really fast!

I went through several different cars during my career. Let's see, there were two Chevrolet Caprices, two Ford Crown Victorias, an old Chevy Van, a Chysler New Yorker, a Mazda RX7, and my favorite undercover car of all, a Dodge Stealth. Now, that one was indeed a toy.

My favorite car of all time was my old Chevrolet Caprice. I kept that car for many years, passing up new ones so I could keep her. She was midnight blue, built like a big box, and would not go over 80 even if you drove her off a cliff, but I loved that car.

That old, blue bucket of bolts was like a friend. She could almost find her own way home in the middle of the night and the driver's seat hugged my butt like a mother holds her baby.

When I left the department they painted my old car and turned her into a marked unit. Then they assigned her to a rookie officer. He wrecked her (turned her over during a pursuit) less than month later. I think the poor car was just grieving for me and committed suicide. He just happened to be along for the ride when she snapped. Sigh...

I love cars. I love fast cars. I really love cars that hug your butt.

But the Charger looks like a Matchbox toy to me. Not for grownups.

I support you in your quest to be the car purchaser, Joyce!

Oh, yes. I hear ya. My husband's pride and joy is his truck. Too bad I can barely get into it, let alone drive it. I refer to it as "the tank."

I have to agree with you about the police cars. The next time I'm in Shaler, I won't be able to pass one of those cop cars without snickering now.

Too funny Joyce. I agree. A woman *should* pick out the police cars. They'd be way more practical - of course, I also believe that if the three wise men had been women, they would've arrived with diapers, onsies and a casserole instead of that whole 'Frankincense and Myrrh' stuff.
And Lee - anthropomorphising your car is one thing...but getting sentimental because the butt-hugger committed suicide..hmmm

Funny, Joyce. My daughter, who lives in NYC and doesn't even own a car, for some reason knows makes, models, accessories, engine size and other useless information (for her). Maybe you could enlist her help in picking the perfect car. Then she could utilize all the stuff cluttering her brain.

I found you even thought the link on TLC didn't work.

If we are going to pick a TV Car, I'm going with KITT.

But maybe that's just because I've been seeing The Hoff in those TV show ads.

Jody, women wouldn't have had to stop at King Herod's for directions either. We don't make no stinkin' rest stops.

Leann, if they ever make me the Queen of Car Purchasing I might take you up on that.

Kathy, if we go with TV cars, I want Sonny Crockett's Ferrari, but only if Sonny is driving. Magnum's would work, too.

Does this mean you are NOT The Queen of Car Purchasing? Damn. I thought the starving artist daughter might get a commission.

Gee, it's a good thing you guys aren't in charge of picking the cars for NASCAR or Jeff Gordon would be driving a minivan. And if you've been keeping up with the posts on TLC you'd see that those guys would have poor old Jeff stopping at the grocery store for "girly supplies" instead of making his scheduled pit stops.

No, Lee. They would not be driving minivans. They would be driving a hybrid Toyota that gets 60 miles per gallon. So there. In a nice color. Maybe sky blue. Metallic, of course. Yes. That would be quite lovely.