Echo from our common past 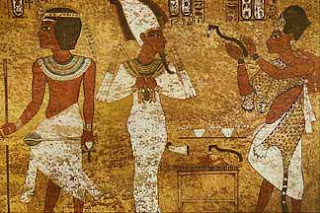 The best teacher I ever had was Mrs. Zingale in the fifth grade. She taught Social Studies and when she introduced me to the culture of ancient Egypt I fell in love. I poured over library books about King Tut’s tomb and I crayoned an entire tomb wall painting for extra credit. I remember that the priest’s leopard skin was particularly difficult. Mrs. Zingale taped my interpretation over the chalkboard. It ran the length of the classroom and caused quite a stir.

In northern Ohio, back in the early ‘70’s, the idea of a female pharaoh was pretty radical. That’s what probably drew me to Hatshepsut. For my class project, I was trusted with an Exacto blade – I was a studious, trustworthy child – and I built a diorama of her funerary temple, Deir el-Bahri, out of styrofoam. I can still feel that grainy textured styrofoam under my fingernails. Mrs. Zingale gave me an ‘A’. 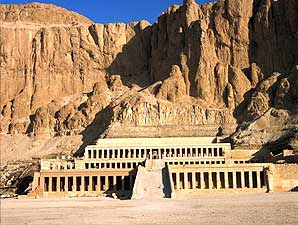 I had forgotten all about Hatshepsut and the fifth grade until yesterday, when officials of the Cairo Museum announced that they had re-discovered her mummy. This is big news. Three thousand five hundred years ago, Hatshepsut stole the throne out from under her half-royal stepson/nephew (don’t ask), and after she died Thutmose III went on a rampage and erased any mention of her from all the monuments and temples. (Dick Chaney did not invent political evaporation). It’s a miracle we even know about Hatshepsut at all. Of course, human workers being human, no one bothered to chisel her royal hieroglyphic off the back of the temple door since when the door was open the back lay flat against an interior wall and maybe – just maybe, with some luck – that bitching site supervisor wouldn't notice that we skipped that bit and besides, it’s nearly quitting time, it's damn hot, let’s go drink some beer – and Hatshepsut’s name and memory survived.

While Thutmose III was having his snit, some kind soul snuck Hatshepsut’s mummy out of her royal tomb and hid it in the cramped but secure tomb of her wet nurse, Sitr-In. The small, common tomb was no secret. Egyptologists have opened it two or three times before in the last hundred years, and they knew all about the two unadorned female mummies inside, but no one paid any particular attention to them since the Egyptologists were all busy looking for the next unplundered Tut. I like to think of Hatshepsut – the divine god-queen of Egypt, one of the most powerful women ever – hanging out for a couple of thousand years with her wet nurse, just laying low, chillin’. It adds a human touch.

What makes the story funny is that we bring our own modern misconceptions to the party. We think any female pharaoh must have looked like Elizabeth Taylor in Cleopatra. 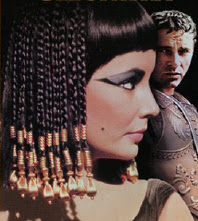 Even Zahi Hawass, the Secretary General of the Supreme Council of Antiquities, fell for this modern interpretation. Of the two mummies found in the common tomb, he suggested that the slim one in the coffin had a ‘royal’ profile. The fat dumpy mummy on the floor, all of 5-2 inches tall and with 'enormous' pendulous breasts, had to be the wet nurse, right? Are queens even allowed to have pendulous breasts? Modern science came to the rescue with DNA evidence and the joke is on us. The obese mummy turns out to be all that remains of one of the most powerful woman to rule a nation. Hatshepsut was obese, suffered from diabetes and died in her fifties of bone or liver cancer. She was every bit as modern as we are. What does that say about us?
Posted by Working Stiffs at 11:24 PM

Fascinating piece. The more things change, the more they stay the same, it would seem. Political and personal intrigue are nothing new.

I wonder if in a few thousand years someone will dig up a tomb containing Hillary Clinton and her wet nurse. And who might that wet nurse be? Bill?

Martha, I was just reading about Hapshetsut's mummy in the newspaper last night before I went to bed. Fascinating stuff! Thanks for the great post, and welcome to Working Stiffs.

Welcome, Martha. Very interesting post! I know very little about Egyptian history. Thanks so much for the brief lesson!

I guess politics never change. I recently saw a quote that Henry Halleck made in 1863 that's still true today: "Party politics! Party politics! I sometimes fear they will utterly ruin the country."

Part of what you're talking about is the politics of beauty. One documentary I saw gave an image of Jesus based typical coloring, hair, and facial characteristics of that time and region. Not at all the aquiline-nosed, fine-boned guy with straight, blond hair that appears in most of the images we've seen!

Martha, Welcome to Working Stiffs! It's good to have you here.

Interesting post. It's amazing to me how much we can learn from the past.