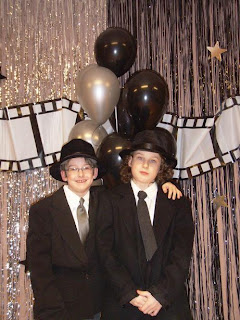 The Curry Brothers as the Blues Brothers

Last February, I blogged about my younger son’s performance in “The Talent Show.” A couple of weeks ago, both my sons were in this year’s elementary school talent show. They actually listened to me for once – bestill my heart – and performed as Jake and Ellwood, the Blues Brothers, doing Soul Man.

They were fabulous and funny and highly entertaining, and, yes, I’m sure I’d still think so even if I weren’t their mother. If you don’t believe me, ask all the other parents who sat through the dozen little Hannah Montana wannabes before them.

The funny thing I realized after the talent show is that a scorchingly embarrassing performance like last year’s makes for a much more interesting blog than when you’re proud of your children. Go figure.

Being of Sound Mind and Body

On the subject of those little charmers, my husband and I stopped procrastinating after only 10 years and had our will done. Now if we kick the bucket, at least we’ve made provisions for the care of our offspring. And what an interesting exercise that was. So interesting that it would have made a great blog topic unto itself, as long as I didn’t mind dissecting the characters of all my relatives and in-laws in a public forum.

During the will-planning process, it occurred to me that this would make a great exercise for writers to undertake with their characters. So tell me, if your main character had a child, whom would he/she name guardian in his/her will? If your character has a variety of perfect choices, may I suggest that you’re making life too easy on said character? His/her circle of friends and relatives – your cast of secondary characters – ought to be at least as odd and complex as my real-life family.

Speaking of odd relatives, I have a couple who puzzle me with the emails they send. They do not appear to use email for any real, personal form of communication, but simply as a means to pass along emails they receive from others just like them – and apparently these others like them, who have nothing better to do than forward emails, are legion.

Two of these people have me on their lists. One of them sends me messages telling me George Bush is a saint, Hilary Clinton is a Communist, and Barack Obama is part of some jihadist Muslim plot to take over America (I can’t figure out if this person doesn’t know I’m a Democrat or actually thinks to convert me to the GOP with these emails), along with warnings about nefarious scams being perpetrated to rape, rob and kill people just like me – which always turn out to be urban myths.

I’m not exactly sure what the other one sends, because she and her friends have the nasty habit of forwarding emails as attachments, and I can tell from the subject lines (“This is soooo cute!!!!”) that the pay-off (a picture of a puppy?) won’t be worth clicking through eight layers of emails, so I don’t bother.

What I want to say is, “Quit clogging up my inbox with your crap!” but these people are related to me – or married to people who are related to me – and I hate to hurt their feelings. Do you know people like this, and if so, how do you tactfully ask them to remove you from their mass email distribution list? Or should I just keep gritting my teeth and hitting the delete key?
Posted by Working Stiffs at 12:01 AM

I'm not sure I'd trust any of my characters with anybody's children. As for emails, I really don't mind the politically weird or the cute puppies -- it's the ones with sappy pictures and, often, angels, that insist I forward them to all of my friends within 15 minutes of receipt that I despise. I never send them on but, just like those pre-recorded phone messages from Ed Rendell, they just keep coming.

One of my friends used to send me every email chain letter known to mankind. I remember finally sending her a particularly heinous one in return. I think I did tell her, point blank, to stop sending me these things. At least they've stopped.

Unfortunately, she's also stopped emailing me to tell me how she's doing. DRAT!

I have one relative who forwards everything, and I mean everything. Some days there will be 20 forwarded emails from her. I never open any of them, I just delete them. We've told her we don't have time to read them, but she sends them anyway.

As for characters, I can't imagine my protagonist having children. She's too unsettled right now. She probably only knows one person who would make a halfway decent guardian, so that would be a tough decision.

I love that picture, Lisa!

Lisa, I wish I could have see the boys doing the Blues Brothers. I bet it was a riot.

One of my best friends who lives two hours away sends me tons of forwards. I've told her nicely that I don't have time to read them, but she told me the ones SHE sends are GOOD ones. And she sometimes quizzes me on their content to see if I've read them. If I confess that I deleted the one in question, she resends it with orders to READ IT.

My advice is just keep hitting the delete button. Some people you just can't argue with.

If my protag had children - which she doesn't, although she'll find herself pregnant in book 4 (although this is a different series than the DIY-one, where I can't see the protag with any children at all) - but I digress, if she had children, the family would step up. The family would be fine with her child. It's her boyfriend the family doesn't like.

Trying to think of anyone to give my own children to is a lot harder. I don't want to give them to anyone else. Wouldn't wish them on anyone else, either.

Wish I could have seen the Blues Brothers! But is anyone else depressed that Hannah Montana is now a role model for little girls? Yeesh.

As for money and kids---we wiled both to my brother, who seemed the most likely to cope with the children. I always thought the money was supposed to go to their support, so that's why we gave him the dough, too.

As for forwards, I don't answer. Any of them. Eventually, most everyone gets the message. Except--of all people--my mother!