Assassin: a person who commits murder; especially: one who murders a politically important person either for hire or from fanatical motives.

A friend at work loaned me a copy of a book I probably wouldn’t have picked up for myself: MANHUNT The 12-Day Chase for Lincoln’s Killer by James L. Swanson. I thought it was an appropriate blog topic, because 143 years ago this week – between April 14th and April 26th, 1865, our nation was focused on locating John Wilkes Booth, the assassin who shot and killed our sixteenth President.

This book is not the same dry history I remember. I can’t put this thing down, and I’m losing sleep over it.

At approximately the same time Abe Lincoln was being stalked in Ford’s Theater, another member of Booth’s murderous crew, Lewis Powell, entered the home of Secretary of State William H. Seward under false medical pretenses and attacked Seward with a knife. Seward, who was already bedridden and trying to recover from an earlier carriage accident (broken arm and jaw) was repeatedly stabbed and cut about the face before his assassin was driven off by members of his family and staff. Secretary Seward eventually recovered, but it must have been one tough week by anyone’s measure.

And when it comes to assassins, this is what Hollywood keeps serving up:

Why is it, when history offers such incredible true stories, that Hollywood keeps offering the same hackneyed female assassin stereotype? I suspect it has a lot to do with immature males (and I’m not just talking movie producers) and their spendable dollars.

To balance the scale a bit, let’s consider the male assassin: Viggo Mortensen in American Yakuza. 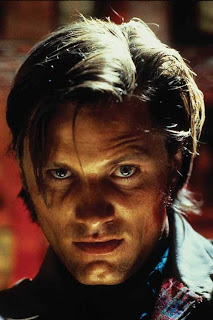 Speaking of Viggo, he’s in Pittsburgh this week filming his new movie The Road, and rumor has it he’s also considering a movie based on the life of Edgar Allan Poe. So in the end, it all comes back to mystery, as it should.
Posted by Working Stiffs at 6:47 AM

I want to read that book! Yes, I'm a bit of a history geek. Conspiracy theorists these days have nothing on the ones back then. From what I've read, a few of the people arrested as Lincoln conspirators were probably innocent.

A movie on Poe would be great. I just hope they don't base it on The Poe Shadow. I couldn't get past the first couple of chapters. I should have stopped by the third page, but I kept hoping something--anything--would happen. It didn't.

Joyce, do read this book, it's a real eye opener.

I never put it together that Booth picked Ford's Theatre because he was an actor, he knew the location (back and trap doors, etc) and the people working their would let him in as a matter of course. As the kids say, 'no, duh'.

The best part is that the author, James Swanson, uses excerpts from actual primary documents like letters and telegrams which gives the story an immediacy; you can really 'hear' what the players were saying - a real sense of personal voice. I highly recommend it.

Seems like a book for my TBR pile. However I have so many things on that pile right now that's being ignored.

Last year I read a rather fascinating--in a macabre sort of way--book about US presidential assassinations: Assassination Vacation. Author's name escapes me. A unique take on assassinations, both personal and historical. Debunks some of the myths that have grown up around our more famous assassinations, and provides some really off-the-wall insights into the American psyche. And Wilfred, I think Johnny Depp would be the ideal Poe. What a great idea.

Johnny Depp can play ANYBODY and I'll go see it. But Poe? What a fabulous bit of casting that would be!

I agree about Johnny Depp as Poe -- that would work. He could probably play John Wilkes Booth quite well also. Hey, maybe we can all collaborate on writing a musical in which he plays dual roles -- Poe and Booth! He could sing duets with himself -- bells bells bells bells bells would be enough to send anybody off the deep end far enough to kill a president or two! My only requirement would be that, unlike Sweeney Todd, any blood that shows up on screen would have to look real.

I love the Poe/Depp idea ... Poets of the Caribbean, anyone?