Behold the Breath of Angels 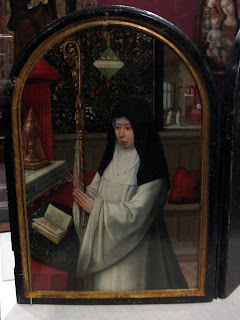 If you find yourself in Pittsburgh, Pennsylvania, try to peek into the Frick Art Museum. Directly across from the entrance, there is a gallery with red brocade walls that we call the Italian gallery, even though several works within it are of other origins. During your visit, be sure to pay particular attention to the floor case in one end of the room. You are in for a transforming experience. The diptych by Jean Bellegambe has returned from its trip to Washington DC and Antwerp, and is now displayed standing so that the third painting, on the verso of the right panel is visible.

The image is of a nun identified as Jeanne de Boubais, who served as abbess of the convent at Flines, from 1507 to 1533. It is unclear if Jeanne de Boubais commissioned both the interior panels of the diptych as well as the verso portrait, or if the portrait was added to an existing diptych. The painter, Jean Bellegambe, is listed frequently in the account books of the convent at Flines after about 1509, suggesting a relationship between the painter and the convent.

Jeanne de Boubais presided over the Cistercian convent in northern France at a time of reform amongst the monastic communities. There was an effort to reinstate cloistering and personal poverty as essential elements of monastic life. Recent scholarship suggests that the image on our diptych was deliberately formulated to convey the devotion of Jeanne de Boubais and her sisters to the reforms. Jeanne de Boubais is shown kneeling before a monstrance and an open text, and holding a crozier, which symbolizes her authority over her convent and its compliance with the reforms. The cloth draped on the altar is embroidered with the words “Ecce panis angelo[rum]” which translates to “Behold, the breath of angels.”
Posted by Working Stiffs at 7:41 AM

I always assumed nuns were entirely powerless, so it's good to think this one might have commissioned her own painting. I'm thinking, too, that becoming a nun was one way to stay safe in dangerous times. Even if you had to bend to the will of church "reforms."

Brenda, I love your blog posts! I always learn something new.

Nancy, even back in those days, nuns were forces to be reckoned with. Some of the most powerful, iron-willed women I've ever met were nuns. Not all of them were nice, either.

Thanks for yet another art history lesson, Brenda. The painting is beautiful!

Nancy -
All I can say is that anyone who thinks of nuns as entirely powerless has never gone to Catholic school!
Brenda -
I love your posts, too -- always interesting and deliciously weird.

Great post. I zoomed in on the painting and saw two ghostly figures in the background. I live in Pittsburgh so I plan to see this in person. Thanks!