You Put What in the Blender?! 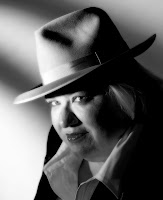 A long time ago, I wanted to be a chemist. A “Cosmo-Chemist,” in fact, and never mind the fact that I sort of realized that dream once Sex and the City came out.

No, this was the icky kind of chemistry, the kind with yellow sulfur and blue cobalt and a Bunsen burner sticky with residue from botched experiments … all courtesy of Sears and Roebuck (have you noticed that good ol’ Roebuck dropped off some years ago?) and their super-duper chemistry set that I received as a Christmas present when I was eight.

In fact, I’ve got a confession to make to my fellow working stiffs (no, my day job isn’t as a chemist) ... just between us, I once mixed a few things together that sort of “bloomed” once I heated them up. A giant, smelly, blue mass started growing and bubbling and actually crawling out of the beaker. I was terrified!! Think Gene Wilder in Young Frankenstein screaming “It’s Alive!”

So I grabbed a pot holder and ran to my back yard. And buried it. And soon after, we moved …

Which means that somewhere in San Jose, California … it’s still there. Brrr.

Now all this is a roundabout way of saying that I like to mix unusual things together. I like to think that with cooking and writing, though, I’ve learned to do it with better results. :-)

This Friday, July 18, my first novel – a decidedly unusual mixture – debuts. Nox Dormienda is a combination historical mystery-thriller and classic 1930s hardboiled style. One reviewer described it as a make-believe collaboration between Lindsey Davis and Raymond Chandler … Ken Bruen calls it Ellis Peters rewritten by Elmore Leonard. I think of it as Roman Noir. It’s the first of a series, so hopefully the concoction will catch on … just like a Cosmopolitan!

Anyway, you get the idea. It’s new, it’s different, and I’ve tried to make it, above all else, worthwhile and entertaining to read. Accurate, too. There’s a lot of student debt in that book!

And to make me feel like I’m not alone in my passion for an unusual combination, I’d love to hear about your own experiments – successful or un – that you’ve tried … cooking, writing, cocktail mixing, clothing, relationships … whatever worked or didn’t! Because chemistry can be pretty damn exciting!

Thank you for hosting me on Working Stiffs! A fabulous blog, with fabulous people (and a shout out to my fellow ITW Debut Author and buddy, the incomparable and amazing Jennie Bentley)!

Now, what did I do with that Cosmo …? 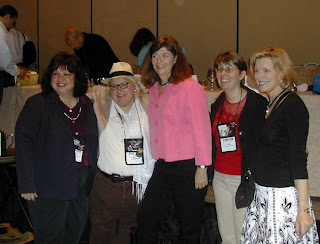 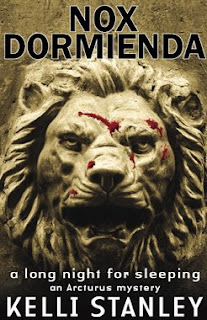 Kelli Stanley lives in San Francisco, earned a Master’s Degree in Classics, is published as a scholar, and likes to wander in the fog. When she’s not writing, she can usually be found at bookstores, speakeasies and classic movie theaters.
Her debut novel, Nox Dormienda, is the first of a new series and new genre of mystery fiction: Roman Noir. Kelli is currently working on a novel set in 1940 San Francisco.

I used to mix clothes in odd ways. My catch phrase was, "Every wardrobe needs a sense of humor." I found, though, that it's a tricky business. Many people didn't realize I was being humorous, they just thought I couldn't dress!

And a friend of mine in high school said I would order the most intriguing combinations of foods when we went out to eat after folk dancing.

A lot of it's about having the right people in your life, who understand when you're being funny and when you just ran out of clean clothes.

I once ordered onion rings and a peanut butter sundae at a restaurant. I expected them to bring the onion rings first and the sundae later, for dessert. But they both came at the same time and I had to eat them together or the ice cream would have melted. NOT a good mix, let me tell you. I won't do that again.

Welcome to Working Stiffs, Kelli. I can't help picturing some developer in San Jose bulldozing property and coming across that old chemistry experiment. There's a story there somewhere.

We're happy to have you here, Kelli!

Tory, I've run into a few people lately who wouldn't know funny if they tripped over it.

Kelli, I'll have to get back to you about unusual combinations. My brain's not quite in gear yet. I guess making pitchers of Lynchburg Lemonade doesn't count?

Congratulations on your first book.

I have fond memories of chemistry class. I hated the class and barely passed, but I do remember the fun I used to have in the labs.

I love odd combinations -- that's one reason that I really like to eat at salad bars. I pile everything on the same plate -- pickles in the vanilla pudding mingling with chickpeas and celery sticks. Mmmmmm.

Kelli, I'm looking forward to your book! I like a story that mixes things up rather than walking the same path as everyone else. Kudos to you!

My question is how much of your background in classics led you to write about this time period? And have you put a lot of your education to good use in the writing? Or did you find yourself doing a lot of different research altogether?

Morning, babe! Great post, as always. And I'm still blushing from the shout-out.

I'm not actually a great mixer. I dress normally, except when I lose my fashion sense and don't. I'm not a good enough cook to get adventurous, and I couldn't mix a drink to save my life. Chemistry - the scientific kind - never interested me much. I never was the kind of kid who liked to make things that bubbled and fizzed. I sometimes cobble together some interesting stuff when I write - at least I like to think so - but I'm not sure it always comes off the way I thought it would. Unlike you! From what I've read of Nox, you've succeeded superbly!

LOL ... thanks for stopping by and the cool clothes comment, Tory! One person's wardrobe challenge is another's Fall Fashion trend!

I say keep up the humor -- I LOVE your catchphrase! :)

Thanks so much for the welcome, Annette! :)

You know, that chemistry experiment gives a whole new twist to "Silicon Valley" ... ;)

And I've ordered onion rings and a hot fudge sundae (OK, I also had chicken pox at the time), so I know *exactly* what you mean!

Thanks so much for having me over, Joyce! I love Working Stiffs!!

And since I am one, I'll be checking back as often as I can from work. :)

BTW, I'd love to know the recipe for Lynchburg Lemonade!! :)

Yup, the labs were the best part of Chemistry! It was kind of like Harry Potter and Potions class, wasn't it? ;)

Wow, Gina, you're a girl after my own heart! Salad bars are SO much fun!

I like beets over potato salad ... and even the good old fashioned Waldorf salad is an odd mixture ...
though I never could get in to mint jelly on lamb, I must confess. :)

Thanks for the welcome! :)

Hi, Nancy, and thank you so much for the comment! :)

For my Master's, I specialized in the Roman period (early Imperial), mystery cult, and theater, so quite a bit of that specifically influenced me.

But even readings and literature that weren't era or culture-specific made their way into the book, because Greece wielded so much influence on Rome.

The best thing about living in academia for almost a decade was that it was like living in the ancient world ... so the experience left me with a built-in knowledge of the cultures, the people, the habits, and, I guess you could say, the emotional undercurrents of the time and place. Enough to imagine it and write about it ... though I still had to do lots of specific research pertaining to London in 83 AD, and things like that. :)

Thanks so much for the question and the welcome! :)

I used to have a cool chemistry set (I can still see the steel locker and white glass bottles with their faded labels.)

I made some really cool stuff with it. I'm not sure where Chemistry sets went. I guess away with erector sets. Liability insurance doesn't cover it.

Congrats on the new novel. I'm getting a feel for what it's like. Anybody around the St. Louis area, stop by at Main Street Books in St. Charles, MO on Friday from 7 PM to 9 PM and have a beer with me.

Wow, Kelli, you studied mystery cults? Several years ago, I took an adult evening course through the University of Pittsburgh that was called "Ancient Mystery Cults." The class lasted 8 weeks. Every week, the instructor would cover a different ancient mystery cult, but all of his lectures boiled down to this: Knowledge was passed by word of mouth and only initiates could participate, so we don't know what they believed and we don't know what they did -- it's a mystery!
Honest.

And I think DIY home improvement and mystery is a very dynamic and cool combo ... and that your blend of it will be around as long as ... gin and vermouth! ;)

Wilfred, now you're talking my favorite kind of chemistry! ;)

LOL ... that's the problem with mystery cults, all right! ;)

How cool that you took a class on cult, Gina! Way to go!!

My thesis dealt specifically with Orphism in The Bacchae ... and thankfully there is more evidence about Orphism than other cults. Another problem, of course, is that Plato's Orphism was different than Virgil's ... Greece vs. Rome, and a 300 year gap!

That's one of the challenges in Classical studies ... the time period you cover is really long!

BTW, Mithraism plays a big role in Nox Dormienda ... that's where the body is found ... ;)

Kelli. Congratulations on your book debut. Just think, I knew you way back when...

And, I think we once lived in that house in San Jose. It was a weird place. Cambrian area? :)

LOL ... thanks, Lee! My table buddy at my very first conference. Hard to believe it was only about a year and a month ago!

I'm staying mum on the location of that house, because I'm not about to incriminate myself with the man who runs the Graveyard Shift blog and wrote "Police Procedure and Investigation"! ;)

(and congratulations on that Macavity nomination, sweetie!!) :)

I'm working on my submission for Portland Noir while listening to the Amelie soundtrack. Talk about a strange brew, but I'm liking it!

Bill, sweetie, thanks so much for stopping by!! :)

I LOVE this combo ... and any strange brew you fix up will always be delicious. :)

I can't wait for October and "Chasing Smoke" to arrive -- that is one hell of a great book!!!