Recently, my husband, Glen, started telling me about a coworker’s pet boa constrictor, which was living in an aquarium at work. Yes, you heard right – in the workplace.

It was about three feet long, but was only a baby, he said, and would grow to be about six feet long by the time it was a year old. 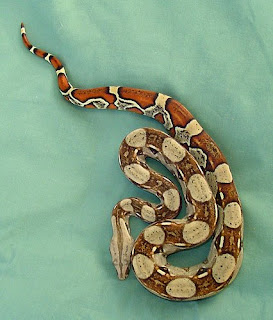 Good grief, rather large for a pet, I thought.

He was really excited the day he came home and told me he got to see the snake eat a live mouse.

The snake was lying on a log in its aquarium. The owner dropped the mouse in. The mouse sniffed around and approached the snake, whiskers twitching.

“Then, BAM!” Glen said. “Before you could blink an eye, the snake grabbed that mouse by the head and wrapped himself around it.”

“The mouse’s little feet were kicking like mad,” he added. “When they stopped moving, the snake ate him. Headfirst. Just swallowed him down.”

I shuddered. “Yuck, that makes me feel sad for the mouse.”

Soon thereafter, the snake’s owner, who is European and will return to Europe next month, started talking about getting rid of the snake. The pet store from which he purchased it was willing to take it back – if he returned the aquarium and accessories as well – but would not refund any of his money. He said he might just turn it loose outside, behind the office.

“That’s terrible,” I said when my husband told me. “That snake can’t survive here in cold weather.”

I don’t even like to set foot in the reptile house at the zoo, and he knows it. I pictured a six-foot boa constrictor wrapped around my poor old deaf sixteen-year-old wiener dog, Erma, her little feet kicking like that mouse’s. It could happen in my house. After all, Erma managed to kill my sons’ hamster, Kirby, a few years back. So it might be a case of rough justice, of what comes around goes around, but still… “You must be joking,” I said. “Absolutely not.”

When the snake’s owner went away recently, Glen filled in for weekly snake-feeding duty at work. He went to PetSmart at lunchtime and bought it pre-killed, frozen mice, even though they cost a lot more than live mice. I guess he didn’t really want to be the one to toss a live mouse to its doom, no matter how cool that National Geographic moment might be.

Today he brought the snake home from work with him.

You think I caved, don’t you?

Well, I didn’t.
We delivered it this evening to a teenage neighbor boy up the street. He loves snakes and was thrilled to pieces to have it. His father, who gave permission, seemed quite pleased as well.

I’m not so sure about his mother, who wasn’t consulted before permission was granted. She said, “Gee, thanks, Lisa. And I thought we were friends.”

But she was kidding. She’s such a good pet owner that the hermit crabs her kids brought home from the beach have survived multiple winters in her house – unlike the ones my kids brought home – because she actually bathes them and mists them and keeps their aquarium heated like you’re supposed to. She was talking about moving the snake to a bigger aquarium than the one he came in when we told her he’d probably be six feet long in less than a year.

I think that snake has her charmed already.

They were discussing naming him Slinky when we left. Somehow, being named Slinky makes him seem a little less creepy. I told them to call us when they feed him. The boys and I just might like to come over and see that.
Posted by Working Stiffs at 12:24 AM

I have to admit, I get angry when I hear of people buying animals as pets and then taking no responsibility for them when they don't fit into their plans. Good for you and your husband, Lisa, for finding Slinky a good home!

That said, I would like to see Slinky eat a live mouse . . .

Snakes don't bother me--in the zoo. I sure wouldn't want one in my house.

And our cat would be dumb enough to go over to the snake and think it was a large kitty toy.

ICK! I get all creeped out by garden snakes! Even teeny ones that look more like worms (although I have no issue with actual worms).

Okay, I can't even write while thinking about a six foot...ICK!

OK, I have to mention that I've had mice as pets -- they are dear little creatures -- so I'm seriously creeped out at the thought of a snake eating one. I'm a lot more creeped out, though, about the snake owner's idea of releasing a growing snake behind the building!!!! [You only have the irresponsible pet owner's word that it would stop at 6 feet.] Wouldn't people start to wonder where their dogs, cats, and kids were disappearing to???

Gina, nobody ever said it would stop at 6 ft. That's how long they are by a year old. Their growth slows down a lot after that, but from what I was reading online about them, they do keep growing and can end up 9 to 12 ft. long eventually. So I would think by that size, you're right -- a dog or small child wouldn't be out of the question as prey. However, they're native to much warmer climes (Colombia, I believe), and I read that they need to be kept at temperatures above 79 degrees, so I doubt there's much chance of one thriving outdoors in a Pittsburgh winter. In Florida, though, that would probably be a different story!

Slinky is a good name. It does make the snake sound less scary.

I don't have trouble with snakes, theoretically. I jump and squeal when I see them in the yard, but I'm not afraid of them, per se. I don't want one, though. And I think mice are cute, although I jump and squeal when I see one of them, too. At least in the house, where one isn't supposed to be. In the pet store, they're cute, though. I would not like to see the snake eat one. Poor little thing...

We've got a dog (a little Maltese/Shih-Tzu/Chihuahua mutt of some sort), a parakeet, and a goldfish. The fish is a carnival acquisition, that's survived for two and a half years now, in a bowl in the dining room. My 9-yr-old is petitioning for a lizard and my 5-yr-old for a bunny, but at the moment, I think we've got enough pets. Especially since I'm the one having to feed and mind them all. And the lizard would eat yucky stuff, too, which I just wouldn't deal well with. A container of pinky-mice in the freezer, right next to the icecream...? No thanks.

I love snakes, and my wife has a morbid/paralyzing fear of them. Now, I love snakes in the wild, I will on occasion, pick them up, and show them to the kids in the neighborhood and talk about the good they do in the environment. It hurts me to see people kill creatures like that because they don't understand them.

Spiders, on the other hand, creep me out. Big time. Paralyzing? No, but I'm not a fan.

This year, with the all summer floods here in St. Louis, snakes along with all the other wildlife have been driven out of their habitats and are easy to spot in my neighborhood. I live on the bluffs of the Mississippi and Meramec Rivers. Four times this summer I've "Rescued & relocated" snakes that I've found hunting in the landscape around the foundation of my home. I ususally do this quietly, because my wife would freak out and want to sell the house if she knew.

For the first time in my life, I'm petless. My buddy Fraiser, a Soft-Coated Wheaton Terrier died on the 4th of July at the ripe old age of 14. I find myself petting every dog I see and even picking up cats for a little pet. We're letting the pain subside a little before we decide if we plan to adopt a new dog.

So bizarro! I know I'm twisted, but I couldn't help having "Confessions" titles pop into my head.

Other than the ones with obvious gross-out overload, some of them could be funny, I imagine.

I'm with Tory and Gina on this one. Glen's co-worker was a huge jerk for even considering setting the snake loose outside their place of business. What a dweeb!

Good for you for finding him a welcome home.

All these different reactions to animals! I too would like to see Slinky dine on a fresh mouse (tho I find mice rather cute), but it would have to be from a distance. I'm practically paralyzed around snakes, even tho I grew up with Blackie (yep, a six-foot-long black snake), who hibernated in the house in the winter and spent the warm months in the barn taking care of the mouse population. Now, spiders I find endlessly fascinating...could watch them for hours.

Lisa, thanks for the great story. Always fun to hear what that crazy family of yours is up to!