You Get What You Play For

I’ve been working steadily on the new novel and something has come out of it that is new to my process – I’m using background music to help me develop my characters. For instance, my new femme fatale is a character named Sally Poldridge who is known among her enemies as The Witch of Wauwinet.

Wauwinet is a small village on Nantucket and it was also the working title of my manuscript until about a year ago when I decided to go with an alternate title because of the difficulty most folks would have in asking for a book with the word Wauwinet in it – a word compounded of a stutter and a bite. That is asking a bit much from the paying public.

I’m not going to reveal the new title until the day the manuscript gets sold. Of course, cut me a check and you can call it anything you want. 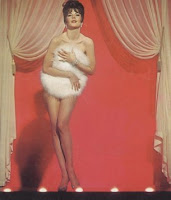 Anyway, today, I am going to show you just a little bit of what I’m holding in my hand. It’s a tease, just like Sally is, and as I’m writing her character into the story I listen to the following song on a continuous looping track and do my best to imagine Sally working her evil magic behind the scenes.

I invite you to close your eyes and listen:

This amazing voice belongs to Canadian jazz stylist Diana Krall who happens to be married to Elvis Costello. For someone who managed to survive the ‘80’s, that combo is pretty cool. Someday I’d love to be in a position where this song gets incorporated into a movie based on my book – and isn’t that a lovely dream to work on? Something this good does make it easier to get up every morning at 5:30 to work feverishly on the manuscript before I head out for my day job. Actually, the writing part is so sweet right now I can’t wait to go to bed so I can get up and write even more.

And my dream isn’t as far-fetched as it sounds. A couple of weeks ago Charlaine Harris turned up on the red carpet at an HBO premier of her original story TRUE BLOOD. Of course, scoring an HBO series based on your story, produced by Alan Ball (American Beauty, Six Feet Under) is a bit of a stretch, but if we’re dreaming, why not dream big? You get what you play for.

PS. HBO’s TRUE BLOOD has just been signed to a second season and it’s the focus of an immense viral marketing campaign that includes the development of an ARG (Alternate Reality Game), a wiki collaborative Web page and what I am sure was an extremely expensive print/mail campaign that targeted high profile members of social Internetworks. I’m glad I didn’t have to pay for that mailing list!

This is what targeted subjects found waiting in their mailboxes:

Hey! Why aren’t we seeing anything this creative coming from the publishing houses? Actually, let’s be honest. When was the last time you saw anything sent out from a publishing house? Bookmarks, anyone?
Posted by Working Stiffs at 7:28 AM

Love the song. It was in a Fred Astaire/Ginger Rogers movie back in the mid-30s sometime. Can't remember which movie, but it was either 'Swing Time' or 'Shall We Dance' I think. It's been a while since I watched them - the old black'n'whites are hard to come by these days - and I can't keep them apart unless they're fresh in my mind, since the plots are so similar in all of them. Gorgeous arrangement, though.

Yes, isn't it? I can't get the tune out of my mind and from what I've read Diana Krall is very old school when it comes to her music.

Do you remember another Fred Astaire song: "What a Marvelous Party This Is?" Love that one, too.

Fred Astaire was a brilliant singer, although everything else he did was totally overshadowed by his feet, naturally. Someone - it may have been Jerome Kern - said that he'd rather have Fred Astaire sing his songs than anyone else. I love 'What a Marvelous Party This Is'. Didn't Frank Sinatra sing that, too? With Bing Crosby? In 'High Society', maybe?

I'm much too young for any of this music, really - a child of the 70s - but I love the songs they wrote back in the 1930s and 40s. Gershwin, Jerome Kern, Cole Porter, Irving Berlin... They don't make'em like they used to!

I had a song in mind when I wrote my first book. Still think it would be a great lead in to the movie.