Are You Aiding Criminals? 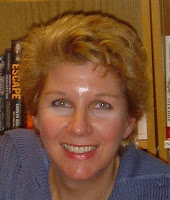 Today we welcome Barry Award nominated author Felicia Donovan as our guest on Working Stiffs.
Are You Aiding Criminals?
by Felicia Donovan
Millions of people are unwittingly assisting criminals without even realizing it. The FBI estimates that millions of computers participate in what is known as a “botnet” and your computer could very well be part of it. A “bot attack” happens when your computer is hijacked by having malicious software (called “malware”) installed on it. This allows remote control of your computer to spread viruses, spam or even commit fraud. Once your computer is infected, it becomes part of a “botnet” or network of remotely controlled computers. The people who launch these attacks are called “bot herders.”

They use your computer to launch all kinds of criminal activity including passing spam, viruses, phishing schemes, and DDOS (Distributed Denial of Service) attacks where they basically tie up a network rendering it useless.

Think about it for a moment. How else could cyber crime propagate across the Internet so quickly if it weren’t for the fact that millions of computers act as a pass-through gateway and actually aid in the propagation? That’s what bot herders are counting on – quick, pervasive attacks and launches using your computer as a part of their network so they can wreak as much havoc in the shortest amount of time. They are so clever at what they do that they can “virtually” change locations overnight by infiltrating thousands of computers at a time. It is not unusual for a bot herder to completely shift operations within a matter of days. This is why it is so difficult for law enforcement to shut these operations down. And you may inadvertently be helping them.
This is just one of the many topics we cover in CYBER CRIME FIGHTERS: TALES FROM THE TRENCHES. Many people have been shocked to realize that they are contributing to the propagation of cyber crime because their computers have been hijacked.
So how do you protect yourself from becoming victim to a bot herder?

2. Run Anti-Virus programs. No excuses here. One of the best, AVG, is available for free at http://www.grisoft.com/

3. Run anti-spyware (also free) from AdAware or SpyBot. These are free, but need the user to run them.

Don’t allow your computer to be host to cyber criminals. You wouldn’t allow someone in your home who has committed robbery, so why let them come in via the Internet if they are robbing others blind through phishing attacks.

Felicia Donovan is a law enforcement technology and cyber crime expert with over ten years experience in law enforcement. She has assisted in Computer Forensics cases and has been recognized by the FBI for her work. She is the author of THE BLACK WIDOW AGENCY series of books and has been featured in many articles including Law Enforcement Technology Magazine. Visit her website, http://www.feliciadonovan.com/.

Kristyn Bernier is a Detective with fifteen years experience who specializes in Internet crimes and undercover work. She is an investigator with the Northern New England Internet Crimes Against Children Task Force and has received recognition for that work from the US Dept. of Justice. She specializes in cases in the areas of domestic violence, stalking, sexual assault and tracking sexual offenders. She has addressed Legislative Sessions in an attempt to modify and strengthen sexual predator laws. 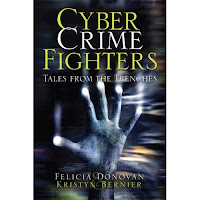 Posted by Working Stiffs at 6:00 AM

Thanks for being our guest today, Felicia!

I have a question you might be able to answer. I know someone who was getting spam from their own email address. It wasn't going to anyone else, just themselves. How does something like that work, and is there a way to prevent that from happening?

Maybe I'm looking in the wrong place or misread the post, but following the link in the blog psot, I found AVG anti-virus for $34.99, not for free.

Dana, there's also a free version. I have it and I love it. Try this link instead: http://free.avg.com/.

AVG is so much better than Norton or McAfee. It doesn't slow down your computer like they do.

I had a neighbor put "spybot" on my laptop after two rounds of mail theft. The second after I booked a flight on line and was gone a few days.

It made me feel as though these people were reading my emails. Or maybe just lucky. However on two separate occasions they got bank cards.

Free spyware was installed by an IT friend. Spybot, Ad aware, Ad watch and Spyware blaster are the names on my screensaver that were in stalled

Sorry for the delay in catching up with posts!

Joyce, I have had several spams that appear to come from my own e-mail address. I traced both back to accounts in Africa and was able to notify authorities. The e-mail isn't really coming from your account. It's being "spoofed." I can make an e-mail appear to come from any username and that's exactly what these spammers and phishers will do.

Unfortunately, most of this is automated and there's little that can be done other than taking down the root source of the spam. Incidentally, the FBI recently did just that - took out one of the most well known spam kings around and spam dropped globally by as much as 50% overnight until they started up operation again.

Dana, sorry for the bad link and thanks, Joyce, for correcting it.

SZ, so sorry you went through all that. What's just as important as having the programs installed is that you must keep them up-to-date and run them frequently. I recommend you pick one every few days, update all the files and let it run overnight. It's just good insurance. One tip - clear your Internet Explorer cache (Go to Tools - Options and delete your browsing history) first or it will take much longer to run.

So glad to be here.

I don't have another comment, but the word verification is "hershi."

How did they know???

I have been visiting various blogs for my dissertation research. I have found your blog to be quite useful. Keep updating your blog with valuable information... Regards