For many people, today’s historic inauguration of Barack Obama is personal. I count myself among them. 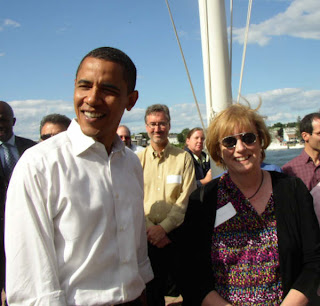 I’m from New Hampshire. We have a law requiring our presidential primary to be the first in the nation. That’s why every candidate wants our votes – and wants ‘em bad – even though NH’s population is smaller than most large cities, including Philadelphia.

I’ve spoken with our new president in person three times, including the day he virtually put me in a headlock on the sidewalk. We’ve also chatted by phone. I attended his rallies, volunteered for his campaign and housed his supporters. One son is at the inauguration today while the other remains on police cadet inauguration alert.

So today is very personal for me. I would have made the pilgrimage to DC, too, if it wasn’t for my great aversion to port-a-potties. I’m also not fond of standing in the cold for endless hours surrounded by record-sized crowds, especially when the view on my 22-inch TV will be the same as the Jumbotron screens they’re watching.

Nonetheless, there won’t be any mystery writing, or much other work, done today as I join millions across our nation and around the world in observing this momentous occasion from afar.

When Barack Obama solemnly raises his hand to take the oath of office, I will rejoice not only for him, but also for what this day means for America. No matter what your politics might be, today should prove that anyone -- including a biracial man raised by a single mother from Kansas – truly can be president.

When I first met Barack Obama on a cold December day in 2006, he was ostensibly promoting his new book, “The Audacity of Hope.” During his “reading” (what the politicos called that initial pre-presidential primary foray into frigid and 97 percent white New Hampshire), he spoke of his belief that although it can be more difficult to remain hopeful, especially in the face of difficulty and uncertainty, it was time to end to the partisan politics dividing our country.

As he spoke, he nervously moved one foot back and forth behind the podium he was gripping as he faced a curious crowd. On a similar snowy day one year later, there were no such signs of unease as he, wife Michelle and Oprah Winfrey electrified a crowd of 8,500 in the largest political rally in NH history.

He returned to New Hampshire many times during the campaign, as did several of his opponents. The story about the NH voter who was asked if he liked a certain candidate and responded: “I don’t know – I’ve only met him three times” is no joke for many of us.

When I unexpectedly encountered Obama during a campaign stroll, I confronted him about my inability to make contact for a story I was working on for the AARP Bulletin. At one point during the tirade, he put his arm around my neck and turned me toward the cameras chronicling his every step. It felt like a headlock and I wondered if he was restraining me because the Secret Service hadn’t. But he promised he would call me and a week later, we chatted for five minutes about caring for older relatives.Months later, Annie from Wisconsin and Tommy from Maryland arrived on our doorstep to work for him and progressive causes in the general campaign. They were amazed at the amount of contact we’d had with a man they’d never met, but had willingly left their homes and jobs for in order to spend 18-hour days canvassing in an unfamiliar state and sleeping in a stranger’s house. I suspect they’re too ecstatic to feel the cold in Washington as they watch the swearing-in today.

After all, it’s personal for them, too. How about you?


When she’s not meeting presidential candidates, Pat Remick is an award-winning mystery and non-fiction author. Visit her “It’s All Novel Material” blog at http://patremick.blogspot.com/ or her web site at www.PatRemick.com.

Posted by Working Stiffs at 4:03 AM

Mixed feelings. Don't get me wrong. I voted for Obama, but with the state of the economy and the world, he's in the same situation as the pilot of that plane that crashed into the Hudson, only for Obama it's as if he just got on board and took the controls when the plane was already heading for the water. I'm really hoping he can bring us in safely, but it seems impossible that anyone could pull it off.

When I walked to the polls to vote in November, I remember feeling PROUD to be an American. Doesn't happen to me often! (Perhaps the first time?)

I'm the one, when at a stranger's house who raised a toast to, "The greatest country on earth," had to resist saying, "Canada?"

Tory, I'm not quite as bad as you, but I definitely felt the pride, not only when I voted, but when the results were announced. I honestly don't think I've ever felt prouder than when listening to Obama's acceptance speech that night.

So I'm going to permit myself to feel a little hopeful on this day, that maybe...just maybe, better days are ahead.

At the very least, we will now have a president who doesn't make me cringe every time he makes a speech.

I wasn't a supporter, but I think he'll be a good president--if Congress lets him. If he can stand up to the partisan jerks in both parties who are only there because they like the power, he'll do fine. That in itself is a big job.

I think some expect him to take office and all of a sudden the ecomomy will magically be fixed. It took YEARS for it to get this way, and it'll take YEARS for it to be fixed. And certain members of Congress need to think of the country instead of just getting re-elected for a change.

Thanks everyone for your comments. No matter who you voted for, today is a new day in America. I am hopeful that this is a president who can unite us because it will take all of us working together to solve our country's problems. Nonetheless, I have believed since the first day I met Barack Obama that -- YES WE CAN.