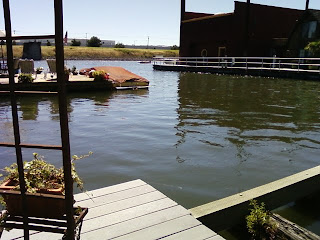 I live in a floating home. No, not a boathouse or a houseboat, a floating home! It sits in the water, but never goes anywhere accept up and down the stanchion pole that holds it in place to my row. Here in the Pacific Northwest there are several neighborhoods of floating homes existing on rivers, lakes, and sloughs. They’re rather picturesque, if I may say so, and some clever photographer has even put out a very nice book on them and included some in California and Florida.

It is not like living on a boat. There’s nothing different about living in a floating home from living in a land house, same kind of rooms, floors, staircases and kitchen equipment. The differences are mostly in the care and maintenance, and definitely the lifestyle. Categorically, no more lawn mowers or rakes; gardening is done in pots (every size imaginable) and between logs if you want to grow water plants. Several of my neighbors have water iris gardens. I tried it, the geese and ducks wrecked it. (More about @#%$&# water fowl later.)

Many of my neighbors have boats and park them along side their houses, or have garages built in. There is space between the rows that allow for boats to move in and out, and quite often, boaters traveling my slough will pull in to take a look. During the summer and in high wind storms are the only times you will feel any movement. When the river is low, we may occasionally bounce against the bottom. It doesn’t do any damage as the houses float on many squares of wrapped float. See picture. The house sits on stringers, they sit on logs, and the logs rest on the float. In the summer when there is a lot of traffic on the river, we may rock a little bit if a boat is traveling too fast. Several residents have bull horns to tell those guys about the 5-mile-an-hour speed limit on our slough. 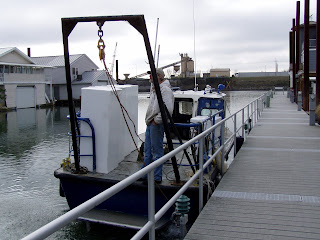 Each square now costs about $125 each. Last winter cost me 3 squares. I have about 30 under the house. 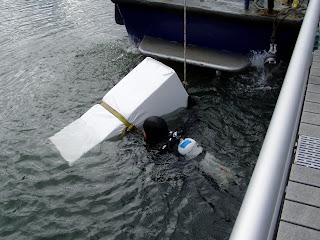 Deck parties are a summer staple and they can move from deck to deck if it’s an open party, and not a family thing.

During the winter you have to watch the temperature closely. If it drops below freezing, water must be trickled from one or more indoor faucets to keep the pipes from freezing. All sewer and water lines run outside. You are attached to the sewer line with a honeypot. It requires yearly maintenance to make sure it doesn’t have any leaks. I’m a row captain in our 17-row moorage, and once a year I go around with a bottle of dye and get my neighbors to flush some down the toilet so I can watch their honeypot pump and make sure nothing flows into the river. BIG fines if a state inspector comes along and catches that happening. Waste and toilet paper are the only things that can be flushed down a toilet. Guests using my downstairs bathroom are confronted with a sign instructing them on flushables.

Oh, and there is no procrastination over shoveling snow. It’s not a matter of worrying about someone slipping on the walk; it’s a matter of not wanting your house to sink from the weight. Not that the house would totally sink, but enough so that water could find a way into the house.

I wish someone would have taken a picture of me and my neighbors during our huge snow and ice storm last December. There I was, hanging out my bedroom window bashing away at the hard layer of ice that had formed over the snow on the back porch roof, while my neighbor was up on a ladder shoveling it off. The ladder sat on the back deck and he had to throw the snow on to it, while his wife shoveled it off the deck. Several houses during that storm tilted to one side and several outer ends of decks lifted out of the water from the weight of the snow.

Oh yes, those ducks and geese! Try thinking of a band of roving dogs constantly barking and pooping in your yard. We’re like a condo group in our moorage, we each own our house and slip, and we collectively own the whole moorage, which consists of the strip of land along the bank of the river and the walkways. The state owns the water, and we lease it from them in 20 year increments. We have a rule in the regulations that asks the membership to please not feed anything: beavers, raccoons, ducks, and geese because it attracts mice and rats and sometimes seagulls. But you know how some people feel about animals. Bread and seed go out by the handfuls. Anyway, several geese and ducks have taken to lounging on the end of my back deck and some exposed under logs I have there. Well, the whole area looks like a toilet. No amount of banging on the window or shouting out the windows scares them one bit anymore. They just squawk and poop all the more. Not even my darling Hugo, a blue heron, who lives in the moorage and comes to visit occasionally, makes me think good thoughts about water fowl. 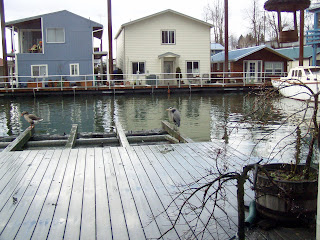 Who’d-a-thunk that living on the water would make people think of building fences, but that’s exactly what I’m going to do this summer with white plastic lattice sheets. Let them squawk about that!
Posted by Working Stiffs at 6:00 AM

How, totally cool, Pat! I think I'd like living on the water. Except for the snow and ice sinking the house. That would not make me happy.

My word verification is clogie: someone who loves to wear clogs.

What is a "slough" anyway?

Laura Ingals Wilder used to talk about them in the "Little House" books. I also thought they were sort of a swamp or marsh, but your picture doesn't look like one!

I never knew there were houses on water. Thanks for enlightening me!

Didn't Tom Hanks live in a house similar to yours in Sleepless in Seattle? I've always wondered how it would be to live in one. Thanks for the peek inside your life, Pat!

Tory: Yes, a slough would be a muddy bog by correct definition, however it is also used as the waterway formed on the other side of an island from the main river. I call what you are looking out at in the picture with the red house on the right 'the slough'. It annoys a lot of people, and they remind me that the correct title is North Portland Harbor. Oh well.

Karen: Yes, absolutely. Tom Hanks did live in a floating home in Sleepless. However, his was lined up along the shore, that moorage didn't have 'fingers' or rows lined up out into the river like my moorage.
And yes, our 'condoship' is called a moorage.
Patg

Cool place Pat. If you had that in Missouri, you could start your own casino.

Pretty cool. Curious as to why people decided to build floating homes.

Thanks Pat for authentic and exciting information, and the photos, describing life on a floating home. A rich setting for mystery and suspense to abound.

What a great setting!