A Bit of Stuff

by Jennie Bentley
It’s a strange time, with some seriously weird stuff happening.

Last time I blogged, or maybe the time before, I talked about being without a publishing contract. That’s at least a month, maybe two months ago. I’m still without another publishing contract. I’m not really worried about it, per se, but it’s a strange feeling. I’m writing, but it’s writing on spec, without any guarantee that anyone, including my agent, will like what I’m doing, and I thought I was past that point...

However, some fun stuff has been happening, and since I’m not feeling particularly pithy today, I figured I’d just natter on about what’s been happening in my life lately.

Last weekend, I attended the Southern Kentucky Book Fest, which was fun. I got to hang out with people like Janis Ian and Kevin Clash AKA Elmo the furry red monster. Pictures here. I’m in the background on a few of these, but since I tend to avoid cameras, you won’t really see me. 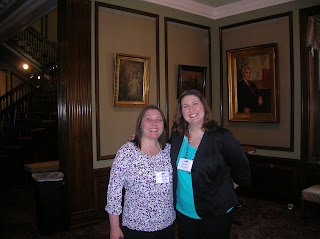 Here’s a picture I knew was taken, of me and my agent-sib Molly Harper. Molly lives in Paducah, and wrote Nice Girls Don’t Have Fangs, which is a snarky and funny novel about a librarian-turned-vampire after a drunk-hunting accident. I don't generally enjoy vampire fiction, but I'm having a good time with this one. Here’s the link.

Since we’re on the subject of books I’ve read lately, I promised a friend I’d do a plug for her latest. I’ve talked about Diana Killian before: she’s a dear friend of mine, and another Berkley author—Diana writes the yoga mysteries, of which Corpse Pose was the first, and she came to Oakmont for the Festival of Mystery at Mystery Lovers Bookstore last year. Some of you may have met her then. She also writes another series of books, called the Poetic Death series. Pocket put out the first three books and then discontinued the series, and I was seriously bummed about that, because I really liked them. They have everything I enjoy: beautiful setting in the Lake District of England, American schoolteacher researching the ‘bad boy’ poets, hot love-interest with an interestingly checkered past... antiques, books, and a Harley-riding librarian.

Anyway, Perseverance Books picked up the series, and Poetic Death #4 came out in April. It’s called Docketful of Poesy, and of course I was on it like white on rice. I enjoyed every minute of reading it; my only gripe is that some things were tied up so neatly at the end that now I’m worried that there won’t be a Poetic Death #5...
As an aside, Diana has invited me to become a Good Girl, so starting this month, I’ll be on the Good Girls Kill For Money Club every other Monday. This coming Monday is Diana’s; the week after is mine. Stop by and say hi!

And before I sign off, a little bit of good news. We can all use some of that, right? Well, while Berkley may not be beating down my door with offers for more DIY-books—but they will be; soon!—another publishing company has shown interest in the first book I wrote, A Cutthroat Business. This is the one in which the new-minted Realtor stumbles over the body of her nemesis and competitor in an empty house. There’s a Harley in this book, as well, although the guy riding it isn’t a librarian. Far from it.

Things have gone far enough that we have an actual contract in hand, so we’re negotiating. If all goes well, A Cutthroat Business will hit stores sometime in 2010; the negotiations haven’t gone far enough yet that I know exactly when. But keep your fingers crossed for me, and I'll keep you updated!

That’s about it, I guess. Anyone else have any good news to share?
Posted by Working Stiffs at 1:57 AM

That is good news! Congratulations!

Let's see. Good news. I have a short story in the spring issue of Mysterical-e. Does that count? (Annette does too, btw.)

That definitely counts, Joyce! For both you and Annette. And thank you both for the crossed fingers and congratulations.

I read your stories, you know. They were great.

My word verification is waties. I guess they've decided to contract waterbabies...

This crazy business is full of ups and downs. Perserverance is the key word. Well that and an upbeat attitude.

Since the others have their appendages crossed already, and I'm not sure how many things you can cross for a cause before it becomes redundant, I'll say a little prayer for you Jennie.

I've been thinking about Monday's Blog and with all the buzz about Swine Flu I figured I jump into the fray. Also, all the hype has gotten me inspired to get back to work on that second book and finish it up. Coincidentally, it's about the Bird Flu.

Thank you, Will. Prayers are always gratefully accepted.

You haven't finished your second book? Shame on you! How's the querying going?

For the unagented among us, did y'all know that Donna Bagdasarian has gone out on her own and formed Priot Literary Management, and is actively looking for clients? I met her at Killer Nashville a couple of years ago, and she's great. Just FYI...