Slow and Steady Wins the Race

I love three day weekends. I can get so much more accomplished with that extra 24 hours. If I really stay focused a three day weekend can seem like it has two Saturdays in it. I particularly needed this one since I played hookey last weekend to attend the PennWriters Conference and then had to scramble all week long to find a clean shirt since I neglected to do my laundry. It’s really pathetic how structured my life is and how quickly it falls apart once I get off schedule. Of course, the grass was knee-high, too, but at least I can blame that on the rain.

Yesterday I finished one project that has been hanging over my head for a solid year: I’ve been working on a painting called One Last Dip. You see, my niece is a water baby and always has been and one of her favorite things to do is jump in the lake just at sunset/bedtime and then run up and get under the covers while she’s still cool from the dip. She has to run because of the mosquitoes which in Muskoka can form a swarm right out of The African Queen. I’ve never tried painting on canvas this size before although I have painted wall murals for friends but this one felt different and I knew it when I conceived the idea. I was walking with a friend of mine down a road a couple of summers ago and I kept flashing on pieces of images – the way the sunlight reflected on ripples in the lake or the way the colors got wavy closer to the shore or the clear summer sky as blue as an old china plate – and I turned to Christine and said, “I think I have a painting coming out of me.” Well, thank goodness Christine is a long-time good friend and she knows enough to put up with my nonsense because she just replied: “Go for it” instead of dialing 911 and asking them to send the men with the nets.

Anyway, I put in a good couple of hours yesterday and got ‘er done. Here is One Last Dip: 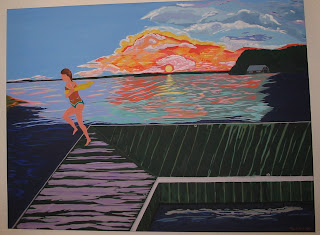 I also know I’m never really done because I'm a lucky devil and there’s always something else waiting in the wings or coming down the pike. Now, of course, my nephew wants a painting, too. His painting will be called Stunt and it’s going to feature himself coming off an inner tube in the middle of the lake at about thirty five miles an hour. The perspective is going to be a challenge, all I see right now in my mind’s eye is flying hands and feet but I’ve been enjoying the challenges coming at me lately, so let’s bring it on.

Which finally brings me to my topic for today: Slow and Steady Wins the Race. I know I’m slow with my creativity – it amazes me that a writer can pop out a short story in a day or a novel in a matter of weeks. I know myself and also know that I have to think things through and I probably over think everything, too. But that’s the way I’m put together and that’s the way I get it done and why does it matter how long it takes to finish a project as long as it gets done? Even if your creative project takes a decade you’re still ahead of the person who never got started or even tried.

The other hurdle is for those folks who put things off because they can’t decide where to start. Getting started doesn’t even really matter either as long as you don’t put the brush or pen down until you’re done.
Posted by Working Stiffs at 6:15 AM

Email ThisBlogThis!Share to TwitterShare to FacebookShare to Pinterest
Labels: creativity, getting done., getting started, timing

Love the painting, Martha. And I can definitely relate to the laundry issue.

For me, if I go too slow and steady, I get bogged down. I think I need a deadline, be it real or self-imposed, to drive me into focusing and getting it done.

Deadlines are good. I like keeping lists with check boxes as a reminder that I need to get something done. I feel a real satisfaction when I check the box off and even more when the list is complete and I throw it away!

As a dasher, I can't relate to the slow and steady thing at all. I can't write a short story in a day, because I can't write short stories at all, but if I could, I could write one in a day. I regularly have 5,000-6,000 word days. It usually takes me 2-3 months to write a first draft, 90,000 words, start to finish. Full time, of course; I'm lucky that way. But slow and steady isn't necessarily any better or worse than fast and furious; as someone said once, in studies, it seems that the way you write is the way you write, whether you write fast or slow. The words are going to come out the same. Or so they say... I know it doesn't make any difference for me, whether I dash them off or go more slow, what ends up on the screen is much the same either way.