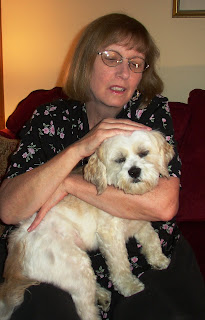 The summer heat has finally reached New England and it's too hot to write. But it seems appropriate during these "dog days of summer" to talk about a recent article that said oxytocin levels almost double in people – and in dogs -- when humans talk to and stroke their dog friends. Beta endorphins and dopamine levels supposedly go up, too.

So, in the interest of science, Buddy and I are increasing our efforts to generate those feel-good chemicals so we won't mind the heat so much. Oxytocin also is believed to be involved in social recognition, bonding and the formation of trust, as well as generosity.

I haven’t always been a dog person. Buddy, the 18-pound Lhasa Apso pictured here, was the first dog in my life in over 30 years. He's king of our house now, but apparently that’s OK for the humans who live here, too. According to the article about Meg Daley Olmert’s book “Made for Each Other: The biology of the human-animal bond,” we feel better about ourselves if we have animals in our lives. I'll try to remember that when Buddy wakes me up at 5 a.m. by barking at the wind.

There have been a number of reports this summer that involve dogs and scientific research. My favorites were the studies that found not only are dogs smart, they're smarter than cats.

According to one report, the average dog is at least as smart as a human 2-year-old and can understand up to 250 words and gestures, do basic calculations, and count to 5. The research also shows a dog's social skills are at the teenage level. Having raised two teenagers, I can assure you a dog is far more sociable than a surly teenager who responds in monosyllables.

The research generating the most controversy among cat lovers was conducted by Dr. Britta Osthaus of England's Canterbury Christ Church University. She tested the ability of cats and dogs to retrieve unreachable food from under a plastic screen with three different scenarios: one string with a treat attached, two parallel strings with just one baited and two crossed strings with food attached to only one. All the cats could do the single string test, but none consistently chose the string with the treat when there were two strings to choose from – unlike the dogs. Cat lovers claim the felines just weren't motivated and don't care what people think but dogs are always trying to please humans. (That would come as a surprise to my husband who is having a difficult time persuading Buddy to go outside in the heat for his evening constitutional as I write this.)

Whether you prefer canines or felines, you probably aren't shocked by the results of an Associated Press-Petside.com poll that found half of all American pet owners consider their pets as much a part of the family as any other member of the household while another 36 percent say their pet is a member of the family, but not a full member. Most also admit to feeding them human food, nearly half give them human names and a third let them sleep in their bed.

I do give Buddy human food and I suppose his name could be considered human. But I vowed I'd never let a dog sleep in our bed. Don't even try to guess how long that lasted.

But now that I know there are medical benefits from having the dog nearby so I can talk to him and pet him to increase our oxytocin levels, I don't feel quite so guilty about it.
Posted by Working Stiffs at 12:01 AM

Email ThisBlogThis!Share to TwitterShare to FacebookShare to Pinterest
Labels: Cats, dogs, Made for Each Other: The biology of the human-animal bond

OMG, that looks just like my Zoe! How can I post a picture in this stupid little box?

My first dog after I moved out of my parents home was a Lhasa named Tigger. Great breed and very smart.

Our second dog was a Soft-Coated Wheaton Terrier named Fraiser. He passed away last summer. Also a wonderful dog. I wrote this about him when I put up my website for my book:

Fraiser is now 14 years old. He is retired and sleeps most of the day. His hearing and eyesight are mostly gone, or he just chooses to ignore us most of the day and he occasionally bumps into things. He has been a good friend and one of those dogs that everybody loves. Never to snarl, never to bite. Always there for a sniff, a lick and a pet. I’ll love him while he’s here and I’ll miss him when he’s gone.

In Mid-July last year I had the difficult task of writing the following:

UPDATE: Fraiser died in his sleep on the 4th of July 2008. One day after I received my first books in the mail, so he did get to see the finished product. The house will seem empty without him and we will all miss him very deeply.

Got all misty-eyed there and forgot to finish my thoughts. Now we have a 4 lb. Yorkie with an attitude. Figures, it's the first female dog we ever had.

This big hampster can jump incredible heights, considering her size, to get right in your face and bark. I guess she learned that from my lovely wife.

It's sad when you lose a friend, isn't it, Will? We had a big, black mutt named Emily for 15 years. DH found her on the street in New York as a puppy, and she came to Nashville with us. Unfortunately, we had to put her to sleep after the vet said she was losing most of the feeling in her hind and back legs, and pretty soon would need help getting around. She was 15 1/2 by then, and absolutely the sweetest dog in the world. Very intelligent, very good-natured, got along with everyone. It took two years for us to want another dog, and then it was mostly for the kids. Her name is Zoe - she came to us gently used, already named - and she's a Lhasa mix. By now, she's two years old. She's not Emily, but she's a nice little dog in her own right. And like your Yorkie, she can jump incredibly high! I like that I can pick her up and tuck her under my arm, but I miss that big, black, loping 75-pounder with the tail that would knock the kids over when they were small. Emily was a one of a kind dog, and I don't think I'll ever find another one like her.

I can't really imagine life without pets. We had 2 Cocker Spaniels that lived until their mid-teens. Both were sweet, lovable dogs. Then we got our little psycho dog (Jack Russell/Rat terrie mix) who is sweet in her own right. Our newest addition has been in our house for 9 days. He's a (get this!) Labrador/Great Dane mix!! This is the first time I've ever had a large dog. We'll see how this goes. It doesn't matter, tho. He'll be around for the duration. You just don't get rid of a member of your family.

Okay, I'll fly the flag of the cat lovers around here. I still can't write about my Sammie (gone two years) without misting up, so I'll just say I love my Skye kitty. Intelligencewise, though, I have to confess: she isn't the brightest bulb in the box. But it's part of her charm.

Jennie, I don't think you can post pictures in the comment box. But maybe we should have a pet's week (or longer) here at Working Stiffs at some point and all post pictures and stories of our fur children.

Yay for Pets' Week -- after all, they often do influence our writing, don't they? Mine usually sleeps near my chair as I'm typing and in my WIP, the protagonist reads obits out loud to her dog....
I really want another dog but my husband has threatened to divorce me since he ends up walking the dog more than anyone!