by Jennie Bentley (and Bente Gallagher)

Looks like nobody else is going to post today, so I'll jump in. Not that I have anything of any importance to say, but I wanted to share the cover for my new book, the first in a new series, coming in June of next year. 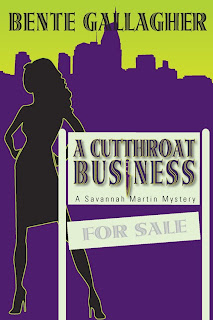 It takes place in Nashville, as you can see from the skyline - that is, if you're familiar with the Nashville skyline. That's the Batman Building my name is getting tangled up with; so-called because of the two towers, like two bat ears. And you'll notice the name is different from the one you're used to... that's my real name, ladies and gentlemen. I'm getting to be myself this time. Fittingly, since the book isn't all that much like the DIY books. OK, it's written by me, and there's a decrepit old Victorian house in it... but that's where the resemblance ends, really. A Cutthroat Business isn't as sweet or cozy, it doesn't have the quaint little town, or the precious B&B, or any cats whatsover. I was reading a lot of Janet Evanovich around the time I started writing it, four years ago, so the love interest has a lot more in common with Ranger than with Derek.

Everyone has warned new minted Realtor® Savannah Martin that real estate is a cutthroat business, especially for a gentle-bred Southern Belle... but Savannah doesn't think she's supposed to take the warning literally. Until an early morning phone call sends her haring out to an old house in a not-so-good part of Nashville, where she finds herself standing over a butchered body, throat slit from ear to ear, across from the man her mother - and every other mother in tiny Sweetwater, Tennessee - warned their daughters about.

I've got what my publisher calls a partial digi-ARC - an uncorrected PDF of the first three chapters, complete with cover art, copyright page, and all the rest - if anyone would like to take a look. Just shoot me a line -HERE- and I'll be happy to send it out to you.

I'll be back in a week, on my regularly scheduled day. Until then!

Posted by Working Stiffs at 8:57 AM

Thanks for the peek at the "real" you! You probably just got used to everyone calling you Jennie, too.

The pseudonym thing is weird. I'll answer to it on panels and conferences, places where I remember who I'm supposed to be, but if I'm walking down the street somewhere, forget it. It's nice getting to be myself!