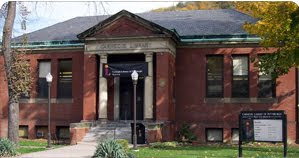 I had originally planned to write about the proposed closing of four branches of the Carnegie Library of Pittsburgh, but it was too depressing. One that's scheduled to close is the West End Branch, where I worked in my first "real" job. I was a clerk and only made minimum wage, but I loved every minute of it.

This branch has been there since 1899. That's not a typo. Really. 1899! The city and the county manage to find money for stadiums, casinos, the G-20, and who knows what else, but they let libraries close.

That's all I'm going to say about that.

Annette's post yesterday really put me in a good mood, so I thought I'd continue the youth theme, especially since mine gets further away every day. When I was doing a search for old TV shows, I found a site called Crazy About TV. This site lists shows I've never even heard of--and a few I wish I'd never heard of. David Cassidy-Man Undercover? Really? I was a big David Cassidy fan in his Partridge Family days, but somehow I missed this one. Probably a good thing. It didn't last very long.

It would be much too hard to decide which show was my favorite. In the 60s, I watched The Brady Bunch, The Big Valley, Hogan's Heroes, Get Smart, and Here Come the Brides (I had a crush on Bobby Sherman). Oh, and I can't forget The Monkees. And Batman. And The Mod Squad. And on Saturday mornings, HR Pufnstuf and Scooby Doo. I remember my mother never missed The Fugitive. I wasn't allowed to watch it. Medical Center was another favorite and I remember one summer the electricity in the neighborhood would go out every Wednesday night at 9:00--just when Medical Center came on. I never did figure that one out.

The 70s was even better. How about Charlie's Angels, The Bionic Woman, All in the Family, Happy Days, Black Sheep Squadron, Starsky and Hutch, and my favorite--The Hardy Boys/Nancy Drew Mysteries. (Although the Hardy Boys were way more interesting than Nancy Drew.)

Even now, if there's an old show on, I'll watch it. Every Sunday night I watch Newhart on WGN. I love that show and it's still as funny as it was the first time around. How can you not laugh at Larry, Darryl and Darryl?

These days, I watch NCIS when I remember it's on. I also like The Mentalist, but I've only watched it once this year since they changed the day and time. Castle is pretty good (be sure to check out Lee's reviews of Castle every Tuesday on The Graveyard Shift.). I think my new favorite show this year is Three Rivers. I'm not sure if it's the show itself or just how cool Pittsburgh looks. Maybe both.


So what shows do you remember? Any favorites? Any you absolutely hated?
Posted by Working Stiffs at 11:56 PM

Joyce, you hit most of my favorites already. I never heard of that David Cassidy show either and I, too, was a big fan. Shaun Cassidy in the Hardy Boys wasn't too shabby, either.

Let me add a few: Alias Smith and Jones and Emergency, which led me to become an EMT out of high school. How about The Dukes of Hazzard (Bo or Luke? For me, definitely Bo) and, of course, Magnum PI.

I don't have cable or satellite TV, but with the advent of digital, we picked up a couple of new stations including RTV: Retro Television and they play a lot of these oldies but goodies on a regular schedule.

I like RTV, but they need to get some better shows. I love Magnum, but they keep showing the same episodes over and over again.

When my nephew was very little, he used to play Emergency. He'd go around trying to defibrillate anyone who'd let him.

Well, first I'll be disappointed if Lee Lofland doesn't stop by and put a plug in tog the Andy Griffith Shoe and the days of real dectective work.

Lucille Ball, Dick Van Dyke, All in the Family and Family Ties for sit coms.

Of course in the newer era, it would have to be Seinfeld and Friends.

Now I have to work my butt off so I can leave at a reasonable hour for the drive to Indy and Bouchercon.

Will, have a drink (or several) for me at Bouchercon.

I liked Charlie's Angels, too. I even had long, flowing hair like Jaclyn Smith. Honest! I have pictures.

I liked Seinfeld most of the time. The later episodes were kind of dumb and I couldn't stand George. I never watched Friends. Not even one episode. I'm also probably the only person in the country who hated Frazier.

I've decided my brain went on to Bouchercon without me this week, because I've been staring blankly into space for days. So, Will, if you see my brain there, buy it a drink and send it home.

As for old cop shows, what about Adam-12? Somewhere around here, I have Martin Milner's and Kent McCord's autographs.

Maybe we need to pretend we're at Bouchercon. Bar trip, anyone?

I'm just glad it's not in Baltimore again. I'd really hate missing the crabcakes.

I'll be away from the computer for awhile. I'm going to apply the next step in the faux finish to the bedroom walls. This should be...interesting.

Before I go, has anyone watched Three Rivers? What did you think?

That's one of those shows I've intended to watch, but haven't caught yet. When's it on?

Good luck with faux finish, Joyce. And ditto regarding Baltimore and the crabcakes. Yum.

I'm back. I put the glaze on one wall and decided I don't like it. I'm painting over it tomorrow. Guess I'm just a plain color kind of gal. Sigh.

Three Rivers is on Sundays at 9. You can also watch it online at the link I posted.

So many shows, so little time (I'm at work now). I guess I have to name the old black and white Perry Mason shows. I'm not sure whether that influenced my choice to become a lawyer, but it sure taught me a lot about trial tactics! RULE NO. 1, which so many young lawyers not to be aware of: always treat the judge and opposing counsel with respect. Wait. Maybe I learned that in karate class, too.

You are so right, Will. Here's a list of some of my favorites:

The Andy Griffith Show
(The front license plate on my vehicle reads, This vehicle Protected By Fife).

and then a little later, Frazier.

By the way, I just signed the contract with the hotel for the Writers Police Academy. The rates are dirt cheap. $79, and that includes shuttle services and breakfast. But it's first come first served. Space is limited.

Jeffery Deaver is our keynote speaker.

I hope you don't mind that little bit of PR, but I'm really excited about the event. There's never been anything like it, with the exception of a real police academy!

Lee, I like ALL the ones on your list, especially Carol Burnett. That gang always made me laugh until I cried.

Do you have a link to more info on the academy???

You heard me thinking, didn't you, Joyce?

You know what they say--great minds think alike!