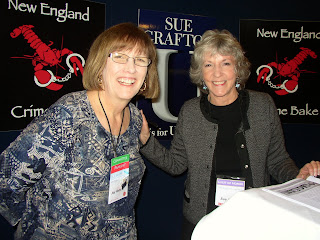 This past weekend was beyond magical for me as a mystery writer, highlighted by a once-in-a-lifetime opportunity to escort a rock star in the mystery world who is also an inspiration to women writers in this genre -- the incredible Sue Grafton.

Her acceptance of the invitation to be guest of honor at this weekend's 2009 New England Crime Bake conference for mystery writers and fans is credited with helping us sell out for the first time despite tough economic times that led to the cancellation of other mystery conferences.

As many of you know, Sue Grafton's books featuring private investigator Kinsey Milhone have been published in 28 countries, 26 languages and have a readership in the millions. She expects to conclude her alphabet series -- which began with "A is for Alibi" in 1982 and will see its 21st installment,"U is for Undertow, on Dec. 1 --  by 2015 with "Z is for Zero."

You can imagine how thrilled I was to be the Crime Bake organizing committee member assigned to escort her during the weekend conference. But you cannot imagine my embarrassment over what happened just minutes after I proudly informed her that we arranged for an executive car service to transport the two of us from the airport to the conference hotel because we were so pleased to have her as our guest of honor. Instead of the black town car I anticipated would drive up, the vehicle from American Executive Car and Taxi was from the "taxi" side and had seen better days. I was mortified then, but can laugh about it now.

Sue, however, was exceptionally gracious. She also is extremely funny and irreverent (no surprise to her readers) and was extrordinarily generous with her time and advice to the nearly 300 authors and wanna-be writers at Crime Bake. Not only did she sign every book and additional object pushed in front of her, she surprised everyone by offering to critique the first 20 pages of one attendee whose name she selected in a random drawing.

I also became aware of another example of her generosity, though it was far less public. An unpublished writer showed Sue a book she had signed at an event 21 years earlier. The woman told Sue then that she was writing a mystery. Sue offered to review a few pages and added her contact information. The woman never sent them, and finally finished her manuscript recently. "Then I'll read them now," Sue told her Saturday. The woman got in her car and drove home to retrieve them -- and later enjoyed the manuscript review of her life.

It's difficult to convey the energy at Crime Bake, but everyone was excited about the opportunity to meet Sue Grafton and hear her speak, although I suspect that some of what she said during her luncheon address was not easily accepted by many in the audience.

I'm not talking about her urging her listeners to delete adverbs and avoid words like glare and stomp. Or her suggestion that writers refrain from having women characters square their shoulders or blow their bangs up off their faces. I'm also not referring to her belief that the trick of a successful mystery is to fool the reader without making him or her angry.

I'm talking about the point where she said that perhaps writers should not join writers' groups. Did I just hear a collective gasp out there? I did in the ballroom of the Dedham Hilton.

In her view, writers' groups can make you feel too comfortable. They tell you your work is great, even when it's not. She believes writing involves isolation and creating in a pressure cooker. In her view, joining a group where you share your work also means you give away energy -- energy that would be better put into your manuscript.

It's a point worth considering. I never joined a writing group because I do not think there is enough time for me to be part of such a group, keep up with my everyday life and finish my novel, too. However, I have many writer friends who say their writing groups are what keep them going and they could not continue this difficult endeavor of writing without such support.

What do you think? Do you agree with Sue Grafton's point about writing groups?

To read more about the Crime Bake experience, click here. The photo is the same, as are some of the words, but there are  more details about the weekend. One important element is missing, however: Our very own Working Stiffs blogger Paula Matter won the Crime Bake Flash Fiction Contest! Hopefully she'll share her creation soon. Yay Paula!
Posted by Working Stiffs at 12:10 AM

While I understand Ms. Grafton's reasoning, I don't necessarily agree with it. Those just starting out especially need other eyes seeing their work to help them learn and grow.

Different strokes for different folks, I suppose. But I value my critique groups and feel it's energy well spent.

I think it really depends on the critique group. The people in the critique group I'm in are all mystery/thriller writers and pretty tough critics. Not one of us would ever tell the other that our work was good if it wasn't. All the criticism is constructive--we'd never tear each other down.

Recently though, we made the decision not to meet every month. There would be months where none of us had work that we thought was ready to be looked at yet. Now we meet when one of us has something to critique, or we need to brainstorm, or we just plain need to talk about what we're working on.

Sounds like you had a great weekend, Pat. I met Sue Grafton very briefly before the Edgar Allen Poe panel at Bouchercon.

As far as writiers groups are concerned, if we're talking about critique groups, I think I said it just yesterday, I'm not a fan. You can wind up chasing your tail trying to inject another person's style or likes and dislikes.

I worked in several different critique groups. For me it was frustrating, especially when I didn't have any confidence that I could really write. Sometimes people comment just because they feel a need to input something.

On the other hand, you can't be afraid to hurt someone's feelings if the critique can make the work better.

The best thing I got out of a critique group was a beta reader. Someone that understood differences in voice and offered suggestions where they were needed.

Now as far as Writers Groups (Organizations) are concerned, they are invaluable.

Thanks, Pat, and it was great to meet you!

Crime Bake was fabulous and it'll certainly become an annual event for me.

Thanks, Annette, Joyce and Will for the congrats!

I've been a member of two critique groups; both were a great help to me. One dissolved, and I've lessened my attendance in the other because my style has become a little less conservative than they like. Both were instrumental in building confidence in myself as a writer, and getting me over many of the early humps.

How helpful a group may be is dependent on the group, the writer's personality, and where that writer is in his development.

Another benefit of writers groups is to provide a chance for writers to give something back, or pay it forward, by helping others. Sue Grafton has clearly found other ways to do that, and the generosity you described here is admirable. Most of us don't have that lofty a position, so we give back at the grass roots level.

Well, I couldn't disagree more with Ms. Grafton. Mind you, that first critique group you're in may not be the best. So find that second group. Or third. My best group has been my online buddies that I got through Sisters in Crime. Online means we have time to mull over our comments. And believe me, if they don't like something, they are not afraid to tell me. That's why we call ourselves the Vicious Circle.

Although I'd hate to give up my critique group, I believe there are writers who are better off without one. There's no harm in leaving a group if it's not working for you.

I'm sorry I missed this post yesterday. In a sort of funny coincidence, I had occasion to meet Sue myself just the weekend before you did, at a party here in Nashville. Friend of a friend, that sort of thing. And she was delightful and gracious and funny and very helpful to a rank newbie who pushed her into a corner and ask writing advice.

I know people who swear they would never have gotten published without their critique groups. I've never been in one and got published anyway. It doesn't necessarily follow. I think they can become sort of a crutch, and they can be an excuse to sit around and talk about writing instead of actually finishing a manuscript and getting it sent out, but some people like them. Different strokes.

I think she has made the major point about why critique groups can be a bad influence on a writer, and that point needs to be in the forefront of your mind when joining one and kept there at all times.
Any group that has a clause about hurting feelings should be dumped. If you can't take the heat, get out of the kitchen.
Unfortunately, how many authors really know how to critique. This really is the big problem. Sure other eyes can point out 'writing' errors, but all too often there are criticisms given based on no knowledge of the overall plot and cause the author to start rewriting way to soon.
Don't let that happen! Yeah, right!
Patg

Okay, contrarian me--but I've never been in a writing group, and I really..um..don't want to be in one. I'm just a private writer, I guess. So I see what (bowing down in awe) Sue means.

But I think the wonderful thing is--it's just thought-provoking. Wrters who like groups and benefit from them--that's terrific. Taking what's said in a group as gospel--well, hurray, you don't have to!

And Pat--what a great photo. And what great memories. You're going to have a stellar year, Madame President!

Thanks everyone for your posts -- I felt so energized after Crime Bake and it was fun to write about writing here.

I hope all of you will consider coming to Crime Bake next year -- and of course, Hank and Paula will be back! -- it's an amazing conference!