Anyone who’s been following my Writing, etc. blog knows of our big remodeling project that culminated this weekend with my office being stripped to the bones.

To summarize, my office AKA my cave was the last room in the house to have the decades old carpeting ripped up and replaced with laminate wood flooring. I love the new floor in the rest of the house, but dreaded the ordeal of moving EVERYTHING out of my domain. I was living in a dreadful state of clutter and definitely needed the incentive to clear out an abundance of junk, but feared I’d lose something important.

I put off the project until all nonfiction deadlines had been met and the first draft of the novel was finished and simmering in my brain prior to revision. Those requirements were met late last week.

I debated showing the horror of the “before” pictures, but here goes.

This is one angle BEFORE. 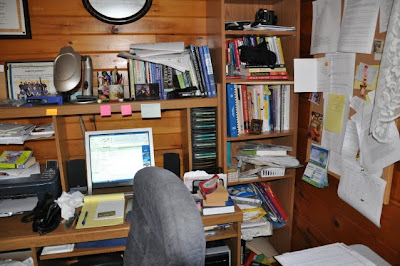 This is another. Eek. 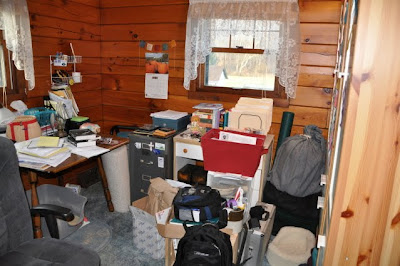 This is after most of the “stuff had been removed. The computer was disconnected and waiting. Skye kitty is just waiting. It's her cave, too, and she did not approve of all the activity going on. 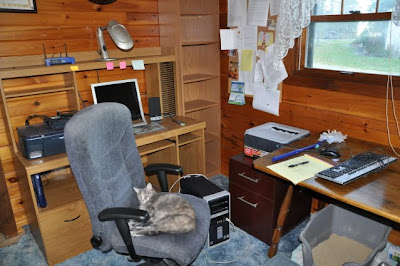 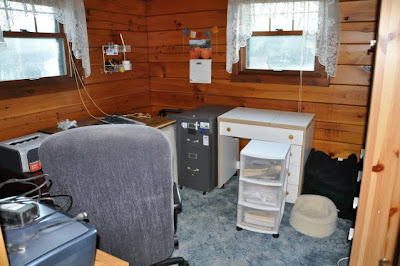 The floor went down in only a matter of a few hours. Reorganizing and replacing all the contents took days. In fact, it’s still an ongoing process. But here is the ALMOST finished product. 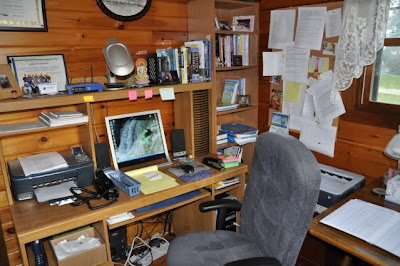 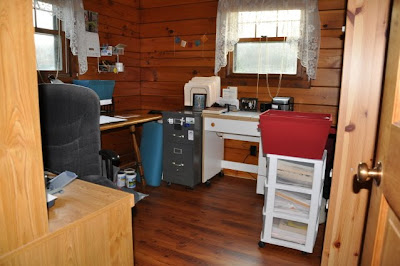 Check out the new floor! And I can see the tops of the desks! Anyone want to take bets on how long that lasts?
Posted by Working Stiffs at 4:48 AM

Email ThisBlogThis!Share to TwitterShare to FacebookShare to Pinterest
Labels: Annette

Yes, Joyce, that is a very important consideration. She loves the way her toys skitter over the wood floor. And her bed and a stack of yoga blankets on the floor provide prime napping opportunities. We didn't change the position of any of the furniture in here, like we did with the other rooms (which totally blew Skye's mind), so she doesn't really have any complaints. So far.

By the way, my word verification is NOUNS. Let me know if anyone gets VERBS.

Gracious! Is that pine on the walls? I am so jealous--what a wonderful room you have to create in. And your kitty gets to come indoors. It is a pretty floor, too. Sadly, I can't seem to wean my family off carpeting.

Word: AERSWIN which must be an Irish racing bicycle.

Oooh! Nice floor! My current office is in a nice big closet off my husband's office. He needs more space because he has the files, the fax machine, the scanner, the rolodex... I do have carpet, since we're in the converted garage, but it's nice new carpet, put down less than a year ago. I'm not gonna show you what my desk looks like.

Lyn, it's a log house, so it isn't so much pine ON the walls. Pine IS the walls.

Jennie, I wasn't intending on showing the "before" pictures. Just took them for my own comparison. But now that it's all tidied up, I figured what the heck.

Looks like a great room to write great things in!

Your "before" pictures look a lot like my "after" pictures.

I expect now that this is over, lots of revising will be done...

Clearing away a space like that can also be a reflection of clearing in the mind. You have now made room for new adventures and expansion! Whoohoo!

As for kitty, we don't have hardwood floors, but do have heating pads in kitty beds, which they find wonderfully delicious.

Alan, one can always hope.

Paula, revising is next on the list, yes. Twelve days, huh? You give me more credit than I do! I was thinking more like 2:00 tomorrow afternoon.

Jamie, my mind could use some clearing. And Skye's heated bed is my lap.

...lap is better than the keyboard, which is where mine would sit if permitted. On hubby's desk, it's the inbox, where the desk lamp shines and serves as a kitty sun lamp.