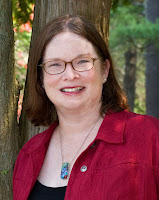 By Guest Blogger Sheila Connolly
Thanks for having me here today!

All the motivational words I live by seem to be "P" words: persistence, perseverance, and patience.

Writing was one of those things I thought I would do someday. Eventually. I had plenty of time, right? I'd always loved reading, so I assumed I knew everything I could ever need to write a book.

The reality was, I had no idea how to set down tens of thousands of words in a way that would make a book. I had no clue about structure or plotting or even word count. So what happened? 9/11, for one thing. That single event made it clear to me that you never know what life is going to throw at you, so you'd better do what you really wanted to–now.

So I wrote a book. I won't tell you it was a good book, but at least I finished it.

I know, you'll hate me, but I never found it hard to write. Once I started, I couldn't stop myself: words just gushed out all over the place. I didn't agonize over every adverb or semicolon; I didn't polish every paragraph before moving on to the next one. Nope, I spewed words. I was having a wonderful time.

Then came the next step–actually selling something. That's a lot harder, both because I had to learn the ropes about agents and submissions–and rejection. In the beginning, when you aren't plugged into all the blogs and loops and websites where writers and agents generously share information, you don't realize just how much rejection there is in this business. I wonder how many aspiring writers just give up, after the first ten or fifty or even hundred soul-numbing rejections?

I didn't, because my love of writing outweighed my fear of rejection. I kept at it, both revising and polishing my first manuscripts and trying out different things. I experimented with romantic suspense and mystery genres; I dabbled in both funny and dark stories; I wrote in first person and third person.

It took almost exactly five years (from September 2001 to September 2006) to sell a book. My first book, Through a Glass, Deadly, written under the name Sarah Atwell, came out in March 2008. The Orchard Mysteries, written as me, came very quickly after that. This month, my sixth book, Red Delicious Death, was published. I've got two more books coming out this year, including the first of a new series, and more under contract after that. It's been a whirlwind!
None of these books has been a best-seller. I haven't appeared on Oprah. I haven't won fabulous awards that give me instant name recognition. Strangers don't stop me on the street and ask for my autograph. No, I write cozy mysteries for people like me, and they sell well enough to satisfy my publisher (I hope!). Readers write me to tell me nice things. I get to go to conferences and hang out with writers I have read and admired for years (and I'm still awe-struck that sometimes they even talk to me!).
And I still love writing. That's what keeps me going, through all the tedious business of promotion and getting your name out there whenever and wherever possible–all the "business" side of writing. Sitting down at my laptop with a new story in my head is the part that makes it all worthwhile, and I hope that never changes.
Sheila Connolly writes the Orchard Mystery series, is launching the Museum Mysteries series this fall, and authors the Glassblowing Mystery series as Sarah Atwell -- all published by Berkley Prime Crime. She was an Agatha nominee for Best First Novel and is VP of the Sisters in Crime-New England chapter. You can learn more about Sheila at www.sheilaconnolly.com, www.sarahatwellwriter.com, or www.poesdeadlydaughters.blogspot.com.
Posted by Working Stiffs at 12:01 AM

Welcome Sheila! Seems like P also ought to stand for prolific for you. Thanks for being here and sharing your advice!

BTW everyone, Sheila serves as VP of our SinC-NE chapter and not only is she a great writer, she's also a really, really nice person.

That's a lot of books! Congratulations :) I haven't read these yet, but they sound like a lot of fun - I'll definitely pick one up on my next bookstore outing :)

Welcome Sheila! That's really something that when you started writing, it came so naturally without agonizing over adverbs, etc.

I'm very new to writing, and I find myself constantly editing everything I've previously written and I agonize over adverbs, commas, etc. I'm curious to know whether after you've finished your first draft, if you have many revisions to make, or if it is basically "good to go"?

Congratulations on your books!

Glad to have you back, Sheila.

I met Sheila when she was in Pittsburgh for the Festival of Mystery, and I can verify that she is indeed, a very nice person. Although I have to admit that I'm a tad envious that she can write so fast!

What a blessing to be able to write so easily! It's the opposite for me, and yet I still wake up every day with the urge to write. Loved your upbeat blog, and I plan to check out your books! (Great cover on Red Delicious Death, by the way!)

Great post, Sheila. I, too, love to write and wrote my first published book when I wasn't working in two and half months, but then it took me two and a half years to get it publishable. So I applaud you for being so prolific and never giving up. I could never give up either.

Good advice, Sheila. And to think we used to feel writing the book was the hard part. No selling it to get it published and then marketing it to keep it selling to the public is the strain.
Good post.
Patg

Yay Sheila! You;re such an inspiration..

I remmber when you were so worried that you would NEVER sell a manuscript...and I remember the day told told me you suddenly had a contract for three books!!

Thank you so much for your wonderful advice--and for being such a good pal and a true sister in crime. xoxo

Sheila, I can't think of a better reason to write a book, because you love to. Well done!

I started out happily ignorant too, and wrote my first book. What I learned next was how much I didn't know, and that however hard the writing is, selling it is much, much harder.
So glad you didn't quit!

Thank you all for your kind comments. I probably should have added "passion" to the list--this is one business you shouldn't get into unless you really, really want to.

I should also add that I waited a long time to start writing, mostly because I didn't think I had anything to say. (First example of self-editing!) I was past fifty when I finally sat down and just did it, and I was far less critical of myself by then.

So the simple answer is, just do it! I think it was Nora Roberts who said, you can't edit a blank page.

Laurie, revisions are relative. I've had books that I've gutted, sliced and diced, and reassembled. Editors can make a big difference: some just make a token pass, changing a few words, and others take an ax to your work. If you're lucky, the latter makes it a better book (and so far I've been lucky).

I think everyone, including the "greats", can use a good editor. I've heard from some writers that their editor just passes their manuscript straight through to copy edits without changing a thing, but I don't believe anybody is that good, or wouldn't benefit from a critical eye.

Sheila,
Loved your post and thank you for the information about revisions!