My knees felt weak as I grasped the cold, heavy metal weapon and adrenaline surged through my body. I didn't know if the angry trucker reaching into his pocket would pull out his driver's license -- or a gun.

My brain exploded into overdrive. Should I shoot or wait -- and pray? Was my life in enough danger that it would justify taking his? What if I missed? Or what if I guessed wrong -- and the trucker didn't intend to hurt anyone. It might take just a single shot to create a widow and leave his children fatherless because of my mistake. My heart was pounding and my hands were sweating.

And this was only a simulation. The trucker was just an actor in a video on a large screen. My gun was real, but it had been adapted to fire a laser beam instead of bullets. A guy sitting at a computer could change the scenario depending on how I reacted to what I saw in front of me and it was all part of the Citizens Police Academy's fascinating eight-week, behind-the-scenes look at police work. 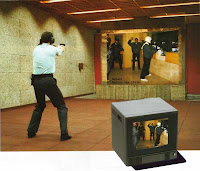 Although the suspects in the simulation videos couldn't shoot at me, the experience provided a small glimpse into the split-second decisions my police officer son -- and other law enforcement officers -- must make every day. It also gave me a new appreciation of the potential ramifications of each of those decisions -- and a clearer understanding of the courage it must take for any law officer, including those patrolling in tiny, quiet towns, to approach a vehicle after pulling it over, not knowing if the person inside has a gun and a reason to use it.
Although I've learned so much, I'm beginning to fear the Citizens Police Academy experience is going to destroy every last one of my comforting trips into the Land of Denial where, when I get most unnerved about my eldest son's chosen profession, I pretend he really did get that engineering degree and enjoys working in that profession in Washington, DC.

However, some of our recent conversations have made that delusion difficult. When you ask how work is going and your child reports he was in a high-speed chase one day and climbing onto roofs to look for burglars the next, it's hard to make yourself believe he's talking calculators and math. And this week I had to ask a question that probably doesn't occur to most parents, whether their children are engineers or not, and it was all because of a video we watched at the Citizens Police Academy. What I had to know was: "Can you can load and shoot a gun with one hand?"

He assured me he's been trained in that skill. Fortunately, most law enforcement officers have been, especially after the 1986 FBI shootout with bank robbers in Miami depicted in the video illustrated how critical that talent can be when your shooting arm has been disabled by gunfire and the bad guys are advancing with every intention of killing you.

I don't think they teach that in engineering school.
Posted by Working Stiffs at 12:01 AM

Nice post, Pat. Citizen Police Academies are great--especially for writers. Not so great for moms, though!

The good thing is that your son seems to be doing something he loves. That's what most of us want for our kids, even if we have to bite our tongues at times.

Nice look into reality, for you and for us. Thanks!

Excellent post, Pat. They didn't have that simulator when I took CPA. Darn it.

I've experienced similar training, and it's surprising how your body reacts, even when it's only a simulation.

It sounds like you received a lot of good material for your writing by participating in the Citizens Police Academy.

Good luck to your son with his occupation, it's not an easy job.
My hat's off to him.

Definitely several reasons so many people have no concept of what police are faced with on a daily basis. If I were queen of the planet, I'd make everyone involved in politics or police watches to take that course. Everyone who wants to bring suit against the police also. I know some is justified, but some of the commentary makes wonder what wonderful land of OZ some people live in. Or if they are among that group that believes civil rights means anything you can get away with.
Oh well. May your son be happy and stay safe.
Patg

Thanks all re my son. Citizen Police academy is a good experience for mystery writers, but as Joyce noted, not so good for Moms~
I'm looking forward to my ride-along -- hoping for a Friday night because there's more action, though the CPA students don't get bullet-proof vests!