A month or so ago, I threatened to do one of those My Book, The Movie, posts for A Cutthroat Business.

I did one a while back for the DIY series. It was a guest post on a blog that does those things, and I had a ton of fun with it. It’s here, if you want to take a look.

A Cutthroat Business, as some of you might know, is the first book in a new series, featuring a Southern Belle and new-minted Realtor named Savannah Martin, who lives and works in Nashville, Tennessee. She’s 27 years old, five feet, eight inches tall, and a respectable size eight, to use her own words. She has blonde hair and blue eyes, and other than that, there’s not much description there.
That’s on purpose. There’s danger in too much description, as we all know. Readers like to make their own mental pictures of the characters, and I’m sure we’ve all seen movies based on books we’ve loved, where the characters haven’t looked at all the way we pictured them in our minds. (Kevin Costner as Robin Hood, anyone?) And I don’t picture my characters as actors or anything else when I write about them; they just look like themselves then. Still, the point of this is to tell you—if a movie was to be made—who I could see playing them. So here we go. 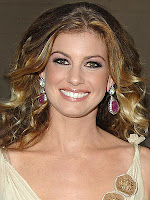 I have no idea who would do a good job playing Savannah. I can’t get a good look at her, since I see the world through her eyes, and since she’s a little insecure and somewhat biased when she describes herself. To my mind, she looks rather like Faith Hill, the country singer. Pretty and blonde, and sexy in a sort of innocent, girl-next-door way. Ladylike, not flashy at all, demure and soft-spoken. The perfect Southern Belle.
Her co-worker Tim looks a lot like Simon Baker from the Mentalist. Tim is flamboyantly gay, and a whole lot of fun to write. Physically, Baker is spot on: the curly, blonde hair, the blue eyes, the perfect teeth... and the attitude. Joyce tells me Baker is happily married with a passel of kids, and looks like the love interest in her WIP, so obviously life would not be imitating art in this case, but that’s sort of what Tim looks like.

Savannah’s high school sweetheart Todd Satterfield, her mother’s choice of second husband for her—Savannah was married to Bradley Ferguson for two years, before he cheated on her and she dumped him—is another blond. Six feet tall, give or take a little, with sort of gray/blue eyes. Pretty much any blandly good-looking guy in a suit would do for Todd; that’s the kind of character that he is.
Rafe, now...

He’s Savannah’s love interest, although she spends most of the book denying that she’s interested in him at all. Rafe’s just not the kind of guy a sweet Southern girl should ever get too close to, and Savannah knows it. In fact, if Margaret Anne Martin, Savannah’s sainted mother, could pick the last man on earth she’d want her daughter to become involved with, Rafael Collier would be him. He’s Savannah’s direct opposite—dark where she’s fair, hard where she’s soft, dangerous where she’s sweet—and we all know how opposites attract. 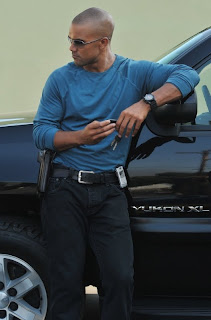 Originally, I pictured Rafe looking something like Derek Jeter. (Yeah, I think Derek Jeter’s cute. Sue me.) That was until I got six pages into the book, where Rafe shows up, and as it turned out, he didn’t look anything like that. Derek Jeter may be many things, but dangerous-looking isn’t one of them. These days, I picture Rafe looking rather a lot like this guy.

That’s Special Agent Derek Morgan on "Criminal Minds," as played by Shemar Moore, for those of you not familiar with the deliciousness. He’s a few years too old—Rafe’s 30—and an inch or so too short, but other than that, he’ll do. Rather nicely, in fact.

So there you have it. The dream cast of A Cutthroat Business. You'll notice that if I can just have Shemar Moore, I don’t really care about anyone else. If you happen to know him, please feel free to pass him a copy of the book. Or better yet, give me his number and I'll take care of it myself.

So tell me, fellow Stiffs and readers, who you see playing in the movie of your book/manuscript. Or if you prefer, who you see playing in mine. And be sure to tune in next Friday, on my regularly scheduled day, when we'll be visited by my fellow Berkley Babe and Good Girl, Laura Bradford AKA Elizabeth Lynn Casey, who'll be telling us about her Southern Sewing Circle mysteries, the second of which - Death Threads - will be released the first Tuesday of May.

Till next time!
Posted by Working Stiffs at 2:59 AM

You'll think this is funny, Bente. I have a character in my wip named Rafe. But my Rafe is gay.

Like you, I have a hard time with "casting" my protagonists. In my wip, Irma Jean is a 6 ft tall redhead, and I can't think of anyone who fits that description.

Nobody seems to fit my ex-cop, martial arts instructor, Summer, either. Her love interest (hot FBI agent) looks like an updated version of Don Johnson in his Miami Vice days.

Actually Jennie, for me, it helps to match my charcters with an actor/actress. It just helps me get a mental picture, not only some physical features, but mannerisms as well. The role of Laura Daniels is and forever will be Evangeline Lilly (Kate from Lost).

Jim Harrison... I could go a few ways, but Carlos Bernard (played Tony Almeda in 24).

What does NOT seem a perfect fit to me is Katheryn Heigl playing Stephanie Plum.

I just taught a session on characters at our local Community College and one of the exercises I used was picturing well established characters played by completely different strong actors. For instance, what would 24 be like if the role of Jack Bauer was played by Jackie Chan instead of Kieffer Sutherland?

Joyce, how about Gena Davis? Yeah, I know she's getting too old, but is that sort of what you had in mind? (And I can't believe you have a gay Rafe. Small world... So is that the guy with the bleach blond hair and piercings?)

Will, I couldn't agree more re Katherine Heigl and Stephanie Plum. I always thought Leah Rimini would make a good Stephanie. You know, the girl from 'The King of Queens.' And OMG, 24 w/Jackie Chan? LOL!!!

I'm not sure Gena Davis would fit. A much younger, much taller Reba McIntyre type would work for Irma Jean.

Without going straight to Golden Girls, my gals are all 45 to 59 and 3/4, I can see Meryl Streep as Pru Peters. In the middle of her characters in The Devil Wore Prada and It's Complicated. Yet I don't see her as my antagonist, Donna Makely, as her in the TDWP, though both are tough glass-ceiling crackers. Who else has a look that would humble you to your knees with a look?
Boy, I so agree! Katherine Heigl as Stephanie Plum is just so wrong!
I like her a lot, but she is NO Jersy girl. We need somebody who can do dumb with a bit of smarts in one look.
Patg

Jennie, I agree with you one hundred percent about Shemar Moore, Excellent Choice!

Will, I totally agree that Katherine Heigl was not the perfect choice for Stephanie Plum. Hopefully, it will work out though, and do well, because I love those books, and I'm looking forward to the movie.

Jennie, Leah Remini would have been good, I hadn't thought of her.

For my female protag, I envision her looking like my daughter. :-)

Laurissa, yes, Shemar Moore is excellent, in oh, so many ways. (grin)

I'm looking forward to the Plum movie as well - I really enjoyed One For the Money; that book is probably the best of the series - but Katherine Heigl...? I don't think so. Definitely agree we need someone with Jersey attitude for Stephanie.