Mr. Monk and me 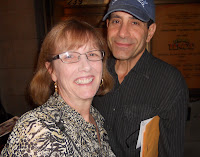 By Pat Remick
Continuing the celebrity theme -- and what I did on my summer vacation -- let me first say that I am such a fan of the television show/crime-solving character "Monk" that I even have a "Monk" bobblehead doll at my workplace.

Adrian Monk, if you're not familiar with the series that ran for eight seasons on the USA Network and whose finale in December was the most-watched basic cable original drama series telecast of all time, was a brilliant -- but obsessive-compulsive -- and damaged ex-detective often called in by the San Francisco Police Department to help solve criminal cases.

As a mystery writer, I loved the many quirks of the character and admired his investigative skills. The dialogue and plots were always smart and witty, and the actor who portrayed Monk -- Tony Shalhoub -- could say more with a raised eyebrow or a single look than most people can communicate in an hour of talking.

"Monk" will probably live on forever in reruns on the USA cable network and also on the written page as he's the subject of at least 10 "Mr. Monk" spinoff novels by screenwriter, producer and author Lee Goldberg. But for me, "Monk" will always be synonymous with Shalhoub, who won four straight Emmys for the role. (He also may be familiar to some as Italian cabdriver Antonio Scarpacci in the long-running sitcom "Wings.")

It's no secret that one of my hobbies is "meeting" celebrities ("meeting" sounds less dangerous than "stalking" ) but I never thought I'd get the opportunity to meet Tony Shalhoub, although in a six-degrees-of-separation kind of thing, he's been friends with one of my co-workers since their Wisconsin school days. However, he has yet to visit her at our New Hampshire place of employment and she can visit his bobbing head doll in my office any time.

So I was thrilled to learn he was starring on Broadway in "Lend Me a Tenor" at the same time our children in exile in D.C. recently agreed to meet their lonely parents halfway -- in New York City. We laughed our way through Tony's performance and those of the rest of fabulous cast, including Anthony LaPaglia (TV show "Without a Trace"), Justin Bartha ("The Hangover" and "National Treasure" 1 & 2) and Tony's real-life wife, Brooke Adams ("Days of Heaven").

At the end of the play, I positioned myself outside the stage door and handed the camera to No. 2 son. Tony was the last of the actors to exit the theater and graciously sign autographs. When I told him about my Monk bobblehead, he said, "I'm embarrassed," which I thought was a sweet reaction for someone who probably thought he'd encountered a crazed fan. He graciously posed for the photo above after I mentioned my co-worker, but jokingly said he would only do so if I could get her to go see the show, too.

But what I really wanted to do is to beg him to return to the small screen and continue the "Monk" series. Reruns won't be enough to satisfy me. Sometimes you just love a character so much that you don't want to see him or her come to an end. Are there mystery character(s) that you would like to see continue forever?
Posted by Working Stiffs at 8:24 AM

I've never seen Monk because I don't get that channel, either!

I'd like to see NCIS go on forever. I just love those characters.

Thanks for filling in today, Pat!

I'm a little peeved that Criminal Minds are cutting two of their female actors this season. One after only two episodes, one to a limited schedule. Don't know if I'll like the show as much after that, so I may not care if it doesn't go on forever.

In books, that's another story. There are writers out there I hope never wrap up their series.

I have seen Monk, actually. There are reruns on, I think, Ion.

I've been a fan of Tony Shalhoub for a long time, but I found the Monk character too irritating to put up with. Tony also paid a writer in a short-lived show, the name of which escapes me, which I liked a lot.

The one I really miss is Jessica Fletcher, although Cabot Cove had to be the murder capital of the world. And once she began to travel, I wondered why her friends and relatives didn't flee in panic everytime they heard Aunt Jess was coming - one or more of them was sure to be killed or unjustly accused of murder!

OOPS! I meant to say he also "played" a writer. Of course, paying a writer is good, too.

I think Tony Shaloub is a terrific actor. I loved him so much in Galaxy Quest, I'd have probably made a big fool of myself and said, Oh please, talk like Fred Kwan for me.

I agree that living in Cabot Cove had to be scary after a season or two, but I did like the episodes in town best.

I am so jealous Pat. I love Monk. I liked the way the series ended. At least they didn't kill him off. Then I would have really come undone.