I’m Amanda Flower, a brand new mystery author who is still taking stock of this crazy and exciting world of publishing. My debut mystery Maid of Murder was released in June at the height of wedding season. It was perfect time for the release of my Maid of Murder, a wedding themed cozy mystery. 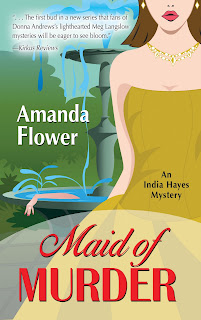 In Maid of Murder, India Hayes, a college librarian and reluctant bridesmaid, is thrown into the role of amateur sleuth as she hunts down the person who murdered her childhood friend and framed her brother for the crime.

When bride-to-be Olivia turns up dead in the Martin College fountain and the evidence points to India’s brother Mark, India must unmask the real culprit while juggling a furious Mother of the Bride, an annoying Maid of Honor, a set of hippie-generation parents, a police detective who is showing a marked liking for her, and a provost itching to fire someone, anyone—maybe even a smart-mouthed librarian.

I started writing Maid of Murder when many of my friends were getting married, so I attended a string of weddings over several summers. Unlike India, I have only been a bridesmaid twice. She held that post six times to my two, but the experience of being in a wedding party certainly inspired my novel. One big difference…no one was murdered in any of the weddings I attended.

However, a similarity between Maid of Murder and a real wedding is the dreaded bridesmaid dress. If you’ve ever been a bridesmaid, you know what I’m talking about. One of my favorite scenes in the novel is early on when India tries on her bridesmaid dress for the first time. India has a fair complexion and the dress is gold. Consequently, it looks awful on her, and of course, it is about two sizes too small for her. She is horrified as any woman would be.

Unfortunately before the wedding can occur, the bride is murdered. Was it due to the horrible bridesmaid dress or something more sinister? That’s what India is determined to find out.

Thanks Working Stiffs for letting me stop by the blog today!

To learn more about Amanda and Maid of Murder visit her online at http://amandaflower.com/. You can also follow Amanda on Facebook at http://tiny.cc/ejquq or Twitter at http://twitter.com/aflowerwriter.
Posted by Working Stiffs at 5:00 AM

Welcome, Amanda, to the Working Stiffs! Congratulations on your newly released book. I've read it, and really enjoyed it. I've only been a bridesmaid twice and neither dress was a joy to wear.

The worst one was the last one. It was sleeveless and the armhole was way too tight. The pinching was almost unbearable. I had it on for almost an hour before we discovered a straight pin at the bottom of the armhole, "stabbing" my underarm and making the armhole way too tight! :-)

Welcome Amanda! I just attended a wedding last weekend (NOT as a bridesmaid) and the dresses were gorgeous. So I suspect there are some brides more sensitive than others to the color and style, question here, thank goodness.

Welcome, Amanda. I've only been a bridesmaid once. Yes, the dress was hideous. But like Pat, the weddings I've attended more recently have involved really lovely bridesmaids' dresses. Maybe times are changing.

I've never been a bridesmaid--only a bride! I haven't even been to a wedding for years.

When I got married way back in 1980, one of my sisters was the maid of honor and one of my other sisters made her dress. No bridesmaids. It worked out well!

Welcome to the Stiffs, Amanda! I've never been a bridesmaid, and didn't have any when I got married. We went to the courthouse on my boyfriend's day off from work; all we got were a few witnesses. I wore pink.

The dress fitting is a classic. My favorite scene is from Jennifer Crusie's BET ME, when perfect Diana is getting married and not-so-perfect Min can't fit into her maid of honor dress, and her mother has a fit because she hasn't lost enough weight. It's classic Crusie, and brilliantly written (and for those of you in Pittsburgh, Jennifer Crusie is gonna be signing books at the Mystery Lovers in Oakmont tonight; waaah! If any of you end up going, take a picture!)

It's been fun reading your wedding memories!!

Hi Laurie,
You asked about how long it took me to write and publish the book. I worked on the novel off and on during college and graduate school, so it took me about four years to write it.Then, I sold the manuscript (after LOTS of rejections) three years after that. It was almost another two years before publication, so all told, it's been a nine year pursuit. It was worth it!

Thanks for letting me stop by!

Amanda, it was fun reading a bit about your story. I think I've only been a bridesmaid once, and I do remember the bright purple dress with dyed-to-match shoes. But it could have been worse!

9 years- wow, what a payoff after so much time and energy. Glad you stuck with it! =)