The Ballad of Slim Bonham

By Martha Reed
First off, let me say, I know my sister accuses me of exaggerating sometimes for effect but I would put my hand on a Bible right now and swear that every word I’m about to tell you is true.
What I’m about to relate happened 22 years ago, back when dinosaurs ruled the earth and way before the Internet was even thought of. I had almost actually forgotten about it until the spooky theme was suggested for this blog and them I remembered this story:
22 years ago I was living in a small town in Texas just south of Dallas. Living in Texas was a bit of a culture shock because I was born and raised in the Midwest and we didn’t study any southern history. I knew some American history but it was the Boston Tea Party and George and Martha Washington so once I got to Texas I realized that there was this whole other culture and history that I knew absolutely nothing about which is why I had to go visit The Alamo. 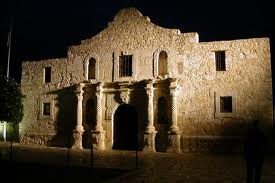 At this point I might have known a little about Davy Crockett from the Fess Parker TV show and maybe I had heard about Mexican General Santa Ana and poor sick Travis but truth be told most of the defenders of the Alamo were nameless and faceless to me. Google hadn’t been invented yet and I know I didn’t spend a minute going to the reference library to look up anything about them. Basically, we got into my truck and drove to San Antonio to see it for ourselves.
We went in August when it was smoking hot and got to San Antonio late in the day. Instead of rushing around we decided to get a room and head over first thing in the cool of the morning when it was only 80 degrees instead of 115. Now I will admit I had a vice back then that I carry with me to this day and that is that I like to drink a lot of coffee in the morning and get juiced up on caffeine. Yes, I know it’s bad for me but there it is. So, first thing the next morning, while Tim was off gassing up the truck, I drank two full cups of coffee and took a tall third cup with me as a traveler to enjoy on the way.
I don’t know if you’ve ever been to the Alamo, but it’s a sacred site. Men are required to remove their hats and women should cover their bare shoulders. It’s about respect. So in we go, through this rough garden and into the Chapel. First thing I notice is a 15 degree drop in temperature but I figure, okay, three foot thick adobe walls, of course it’s going to be cooler inside and I continued on.
The chapel has stubby pillars running down both sides, from what I remember, and there was a hallway down the right side all filled with flags representing the different authorities that have controlled Texas during the course of its history. Tim went off in that direction to look at the flags while I went forward into the chapel by myself. 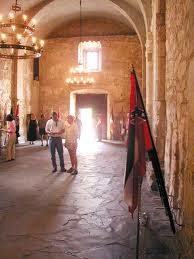 This next bit is a little tough to explain so bear with me. As I moved forward, I felt the hair on my head prickle and I realized that there was someone lying on the floor propped up against one of the big pillars. I couldn’t see him but I knew he was there, every bit as real as I was. He had his back to the pillar and he had a horrible chest wound that had something like a shirt stuffed into it to staunch the bleeding. He knew he was dying, and when I realized he knew that I felt just how horribly tired he was because he’d been fighting without any sleep for three days and he was actually okay with dying because then he would be done with it and he could close his eyes and finally get some rest.
All of this was going through my mind but none of it was thought; I was feeling this. And then he spoke to me only I didn’t hear it through my ears I still “heard” it through my brain, and he made a joke and I recognized it as gallows humor because he said: I’m dying for some coffee and I know he said it to me because a) I had a skin full of the stuff, b) he really was dying.
I was paralyzed by the raw feeling of this going through my brain when my eyes weren’t recognizing that anything was on the floor in front of me but I still had enough presence of mind to think the message: Who are you? And he replied, like a whisper: Slim Bonham. Then I heard a snap like static electricity and it was gone.
At that moment, Tim came back from the flag hall to find me and he looked at me funny so I know I must have been a sight. I remember he asked me: what’s wrong? And I told him what had just happened. He walked me into the flag hall and there on the wall behind all the flags was a list of the defenders who died at The Alamo in alphabetical order and there he was, listed under the Bs: James Bonham, only he told me to call him Slim.
Okay, so like I said, all that was 22 years ago and I had almost forgotten all about it except that I told a friend of mine about my blog idea now and she asked: have you googled him? Well, that wasn’t even available back in 1988 so I did it after I wrote this blog and what I found in Wikipedia gave me chills.
“He is believed to have died manning one of the cannons in the interior of the Alamo chapel.”
Huh. You won’t get an argument out of me. Rest in peace, Slim Bonham. I still remember you. 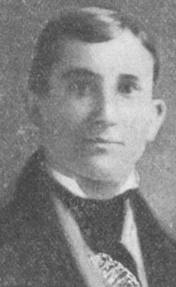 PS. 22 years ago I was thirty years old so now, looking back on it, I think Slim might have been a bit of a rascal, flirting with a woman even after he was dead. I wouldn't put it past him. I know he had a delightful sense of humor!
Posted by Working Stiffs at 6:00 AM

Wow, Martha, this is pretty incredible. I have been to the Alamo and it is very moving, but never saw anything like this!

Wow, Martha. Very cool. I can imagine wanting coffee from beyond the grave, too.

You are a tremendous storyteller.

Wow. Just... wow. That gave me chills. So Martha, did you 'recognize' him when you saw the picture? Or didn't you really get a look at his face back then?

Hey, Martha, Diana Gabaldon had a similar experience when she visited the Alamo. Your "coffee exchange" topped her encounter hands down, though. She just felt a presence near one of the doorways, kind of like bumping into a live person sans body, I guess. The story is on episode four of her podcasts--"Ghosts". She went back the next day to see if he was still there, and he was! Maybe "Slim" and her ghost were the same guy. Great story to share if you ever want to write her. Or sell it to Starbucks! Kelley

Creepy, Martha. I've often felt the presence of the dead at battle sites (or even museum displays that include material objects from battlefields), but I've never had one of them speak to me. Maybe we should all pray that Slim finds peace.

Wow, maybe I should go visit the Alamo. I never have experiences like that.

I love history and I particularly love ghost stories related to it. What an amazing experience and one to treasure. Thanks for sharing it. Now I wish even more that I was going to RWA National. I would definitely go visit Slim. =)