"They took my hat" 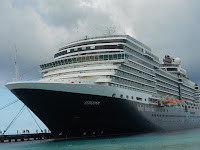 While lounging in the sun on the deck of Holland America's M/S Eurodam last week, I seized the opportunity to listen to some of the dialogue around me because even though I was on vacation, I believe in taking advantage of any opportunities to enhance my writing and also that "it's all novel material."

But by the time the loudest of the ongoing conversations in my vicinity finally concluded, I was ready to act out my own murder mystery involving one of the participants -- a woman who announced in a nasal New York accent that "they took my hat" and then proceeded to discuss this development with a female companion for at least another 43 minutes straight.

"They" was a cruise ship employee who, according to the story, likely scooped up her black and white cap obtained during a cruise to Bermuda and did so when he removed a used towel from her chair after she went to the restroom. Her husband, Meyer, apparently was supposed to have been guarding said hat but also didn't notice the incident precipitating the crisis, which eventually involved chasing down several deckhands, trying to gain entry to the cruise ship laundry, and making two trips to the ship's main desk. I know all this because it was recounted in excruciating detail, with every other sentence repeated for emphasis. The other woman's role in the conversation seemed to be to mumble "really?" at appropriate moments.

I wanted to scream. I imagined how the other passengers might react if I leaped up from my deck chair and yelled, "Just go buy another hat, lady. It's gone. Give it up. Hell, I'll buy you another hat if only you will just please, please shut up!" But instead, I kept my eyes closed and prayed that Meyer's wife would disappear like her hat.

Then I thought about some of the other mundane and sometimes seemingly endless conversations I had eavesdropped on during this cruise -- in the buffet line, on the elevators, in the hallways, etc. and it reminded me again that much of what people say to each other is extremely boring to those not involved in the immediate discussion (but sometimes also to the direct participants, as well).

And yet, when we write our stories and novels, dialogue plays a key role and we work hard to make it realistic. But we really don't want it to be realistic, do we? Who would want to read the entire conversation about Meyer's wife's missing hat or that Ellen should not be eating eggs for breakfast or the details of how the Eurodam's onboard casino compares to every other casino in America?

Even most of our telephone conversations are too boring for our books: "Hi, is this Jack?" "Yes, it is." "Well, Jack, this is Joan. How are you today?"  Who wants to read that?

When it comes to dialogue, we're told to use only the good stuff and only if it advances the story. But that's not how people really talk, is it?

On the other hand, have you ever overhead a conversation that you felt you absolutely must steal for your work in progress? Did you whip out a notebook and jot the must-have phrase or conversation down?  What about the boring conversations ~ are any of them useful to your writing?

By the way, I spotted Meyer's wife at the beach in the Bahamas a few days later and she was still hatless. I'm wondering if Meyer threw it overboard in the hope she would spend the rest of the cruise searching for it and therefore, leave him alone. And maybe it was all a nefarious plot designed to send her into the ocean after it, which he might have hinted at in a conversation with a fellow traveler who turned out to be his mistress.

Now that's a conversation I would have liked to have overheard.
Posted by Working Stiffs at 12:01 AM

I love to eavesdrop, too, and even in those excruciatingly boring going-on-forever-please-let me-die-so-I-won't-have-to-hear-anymore ones there are sometimes intriguing bits. I can imagine a character whose boring monologue runs throughout a book, dropping clues right and left. Reading your post, I have to wonder what was so special about that hat? Had she concealed the winning lottery ticket in the lining? Did someone - an unrecognized old enemy from grammar school, perhaps - abscond with it for use in a voodoo ritual that would result in her eventual death? Was there ever really any hat?

If this ends up posting twice, blame it on Blogger. It's acting stupid. Again.

Nice post, Pat. All writers must like to eavesdrop. I do it all the time, but hubby--a numbers guy--doesn't. Unless someone is talking about money, of course.

There's definitely a trick to writing good dialogue. I just tried to read a book where it was excruciatingly bad. I had to stop reading after a couple of chapters.

How annoying! I love the idea that her husband threw it overboard, Pat.

At the Metropolitan Museum of Art in NYC a few years ago, I stopped in the cafe for lunch, and had to squeeze into one of the few tables available, in a corner. There were two women in the table RIGHT NEXT to me, one of whom was complaining, loudly and vociferously, about her daughter, and her daughter-in-law. It was quite the conversation. The other woman could barely get a word in edgewise, trying desperately, I could tell, to let the first woman know she was completely wrong.

As soon as they left I hauled out my notebook and wrote down as much of the conversation as I could, it was that amusing.

Conversational cannibalism, that's what it is. :-)

I love dialogue! It's a wonder I don't write scripts, but I don't.
The boringness that you mention is the 'good stuff' of dialogue, however the author has to present it in a way that adds to the story.
Agatha Christie used to write those three-quarters of the page sentences of characters who were the gossip mongers of the town, and though they seemed like nothing, they always held clues and were always hillarious. If you are going to write them, I'm sure they will go through several rewrites before you get them right.
Cruise ship blathering is my favorite. Sitting there in a deck chair, a convenient book, magazine or hat available to cover your face when you want to lean closer and listen in. I'm betting there was no hat, Meyer's wife couldn't talk without complaining. Meyer knew her little ploys and intended to use it to his advantage.
"She finally found it where she left it out on the veranda, and when it blew overboard, she chased it." Sniff, sniff.
Patg

Pat,
Although the conversation was thoroughly boring to you at the time, I found this post thoroughly entertaining. Great post!

Great post, Pat! I think one of the best skills a writer can cultivate is communicating to the reader that the boring/real stuff takes place, but she doesn't necessarily have to suffer through it. I'm always looking for the techniques other writers employ!

Priceless.
I note conversations I overhear to remind how mundane daily chit-chat is. - oh, and how nosy people are!

A good psychologist could have a field day with Mrs. Meyer and her hat - need for attention? Feeling special? Victimized? Finally something to talk about? Delicious fodder for character!

Conversational cannibalism? I LOVE THAT TERM! I also loved that you all get it when it comes to eavesdropping as "legitimate" research! And some of your speculation about the hat was pretty funny, too!