The Making of Cupcakes, Lies, and Dead Guys Book Trailer! (The Agony, The Ecstasy, The submarine sandwiches…) 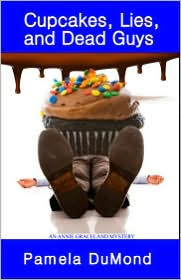 Hello Working Stiffs and Readers!
My name’s Pamela DuMond. I’m happy Ramona DeFelice Long asked me to share my inside scoop on how the book trailer for my debut novel, Cupcakes, Lies, and Dead Guys came to be.
Here’s the link for my book trailer:
http://www.youtube.com/watch?v=YdijpPkuzeU
After you read my post, you’ll get to read Mike Snyder’s version tomorrow. He’s the mastermind producer/writer/film-maker from The Trailer Guys who created my trailer.
When I signed my contract with Krill Press for my novel, Cupcakes, Lies, and Dead Guys, in July 2010, I knew I wanted a book trailer. I heard they were gaining in popularity and could help market a book. However, I was confused on where to begin this process.
Lucky for me, Mike Snyder and I have been ‘buds’ on a writers’ group for years. (Advice: Take the time to make connections with other writerly, creative people.)
In some great timing, Mike and his friends had started a company called The Trailer Guys specifically designed to create high quality book trailers.
I chatted Mike up (begged), discussed my book’s esteemed future (slipped him a mickey), and he agreed to make my trailer. With Mike Snyder and his crew’s credentials, I relaxed and decided to let them hold, burp and even change my baby. I knew my debut novel was in great hands.
I sent Mike and his peeps MS word copies of the book. We met over lunch and discussed my novel’s tone, key colorful characters, and the ‘look’ of the book. How the story could translate to the ‘small screen’. Mike’s biz partner, Harry, a brilliant curmudgeonly bloke, described Cupcakes as a farcical romp. Bingo. Mike started throwing out ideas for scenes right there at the lunch table.
Being that I live and work in L.A., I know a lot of actors. Before I handed Cupcakes, Lies, and Dead Guys novel to The Trailer Guys I already promised the lead role to a client/friend of mine, Aurora de Blas. (For future reference – let The Trailer Guys do the casting.) 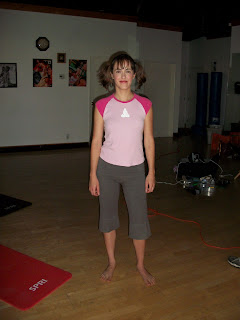 They were a little nervous, (eyebrows raised, hands thrown in the air and Harry kept  mopping his face and huffing,) I had given the lead to an actress who might not have comedic chops. Trust me, they were thrilled when they discovered that not only could Aurora do comedy, but she was flippin’ fearless. Pratfalls, stomping on graves, freezing in the early morning on the ocean’s beach, hiking her skirt up to yeah, there, to play a sexy temptress. Aurora was simply the best. (She recently raised enough money to film her own sexy cool short film called Incredible Girl. I’m including the links to her project if you’d like to follow her progress.)
http://www.IncredibleGirlFilm.com/
http://www.facebook.com/CeliaAuroradeBlas
I lucked out when a friend of some friends heard we were casting and offered to play a cop. After I got a look at Darren Snapper, I said, "Oh no mister. You’re far too cute and how’d you like to play the juicier role of the husband?"
The night before the shoot, October 30th, I worked late and then had to hunt down a variety of props including Valentine’s Day balloons. Try finding Valentine’s balloons the night before Halloween. I was so nervous that night I barely slept.
October 31st, the first shoot day, everyone started converging at my place around 7 am. Cynthia Ann Richards was the super cool make up girl, in charge of props, and every director’s dream assistant. She set up her makeup station on my back porch. (Can I adopt you, Cynthia?) Thank God Mike brought a tub of coffee. We used my kitchen, living room, front yard and sidewalk for film locations.
In between fetching necessary things: pillows for Aurora to fall back on when she fainted, pizza, etc., I used my Flip Camera to film behind-the-scenes footage of the Making of the Cupcakes, Lies, and Dead Guys Book Trailer. Those little videos became an invaluable marketing tool for the book. (If you want to see some of these vids, go to the book’s FB page:  http://tinyurl.com/24ozz5z )
We hightailed out to Northridge to film more scenes at the California Fitness Center, owned by Steve Balalian who generously gave us the location. 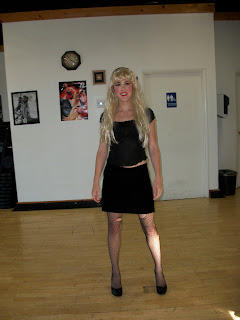 Mike enlisted Riley, his son to play ‘Troy’ the assistant. For J.T. Ellison’s trailer Riley was hung upside down from an outdoor balcony in the foothills of the desert. For Cupcakes, Riley got to be seduced by Aurora’s character, Annie, who dressed up like a trollop. Hmm. Wonder which role Riley liked better? (Riley was awesome!)
Then there was Deb Whitcas, the hardest working woman in Hollywood. She played super fit trainer Ginger just perfectly.
Like any shoot, there was a little drama, mama. My biggest meltdown happened when Mike requested a briefcase for the husband character to carry. I dug around in a closet and found a black bag that I couldn’t even remember buying. They told me to stuff it with books or pages. For good luck, I filled it with pages from a draft of Cupcakes. That’s when I found a business card in the side pocket.
I looked at it and realized it was my dad’s business card. He died in 1993, and my book is dedicated to him. I burst out crying as I realized he’d be so proud and encouraging. So in a way, he was there for the shoot.
Has this book trailer made a difference in sales? I can’t say for sure. But what I can say is that Cupcakes, Lies, and Dead Guys has already beaten the odds for an Indie published novel. It made it to #2 on Kindle’s Hot New Releases under “Ghosts” and is still currently selling like, well, cupcakes on e-readers.
Here’s the Amazon link for the book:
http://www.amazon.com/Cupcakes-Annie-Graceland-Mystery-ebook/dp/B0048ELMCY
Thanks Mike Snyder and his crew at The Trailer Guys for creating a trailer for my debut novel that a girl could only dream about. Mwah to all of you! Now, go read a book and tell someone you love about it!
Best,
Pamela DuMond
Posted by Working Stiffs at 12:01 AM

Dead Guys....huh? i love you Pam but dead guys!!!energy follows thought and what you say makes a difference.
At very least to two people (me and you)
I know your friends will probably quash this comment but I only care how you take this

Welcome to the Stiffs, Pam. Thanks for sharing your experience! It sounds like the trailer was a lot of fun to make.

Great book trailer! And great behind the scenes drama of how it all came together - especially the part about finding your dad's business card. - Grant

Welcome to Working Stiffs, Pam! I loved the book trailer! Thanks for sharing the process.

You made the right decision on the book trailer production, Pam! The did a great job. It does justice to the terrific mystery. :) Your book is in my stack and I think I'd better move it to the top!

Welcome to the Stiffs, Pamela! Interesting story about putting the trailer together. JT Ellison is a friend of mine, but I haven't seen her trailer; must look for it. Great job on this one, anyway.

(Is it just me, or is this Richard person a little creepy?)

Richard's a nice guy who doesn't understand titles. I'll give him a pass. After all the title wasn't going to be 'Cupcake, Lies, and Dead Flies'. That never ever would have sold.

Really enjoyed reading the "behind the scenes" stuff. Thanks for posting it. I'd say something about Richard, but as he said, "energy follows thought", so I'll just think it. Plus, you gave him a pass.