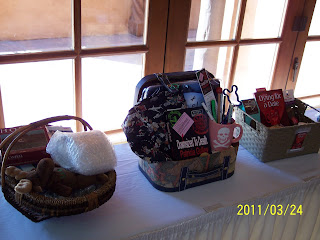 What a good trip. We flew Southwest to Albuquerque, and I really worried about that no seat assignment thing, however it seems they have these posts that are lettered and numbered that you stand between and the boarding was easy-peasy. The shuttle to Santa Fe was right there and on time. Santa Fe is a very pretty place. They have these rules about building height--no more that three stories (a government building has 5, but two are underground) and they all have to be adobe brown--fake or real.

I think I was a bit nervous about the panels, especially the one I moderated, but that one went VERY well. Creating Characters Before Your Eyes required audience participation. Rob Kresge, the panel was his idea, bought the little baskets and small note papers that the audience would fill out, and while they were doing that we four panelists spoke briefly about ourselves and our books. Three slips of paper were filled out, Pink-for sex and age, Blue-occupation, Yellow-a character trait. They passed them all forward and each panelist took a handful from each basket, separated the slips by color, and using one of each created a character that would interact with the other panelists’ creation. As the moderator, I then had to select which was the protagonist, killer, victim and either love interest or sidekick. Then we'd throw it out to the audience to recommend titles. It was a hoot, got lots of laughs (we did try for funny) and Daryl Gerber Wood, (Avery Aames) shot back some of the funniest titles. They really got laughs too. The other panelists were Kaye George, Kay Stewart and Robert Kresge.

For the second panel, Publishing Today and Tomorrow, I was just a panelist and I managed to sound like I knew something about being published by an ePress. The other 4 panelists all have multiple books to their name, so I was the real newbie with only one book. I suggested the next possible gadget reader after Kindle and Nook, and Denise Dietz patted me on the back and said she assumed I'd written some SF. Not only did we discuss eBooks, but Audio books too. Denise just had her book, Footprints in the Butter, published by Siren Audio Studio as a scripted audio book. This is really different as a cast is hired to read the book unlike most audios, which are narrated by one person. A very interesting panel moderated by Judith Van Gieson and included Harlen Campbell, Denise Dietz, Carolyn J. Rose, and L J Sellers.

They had a breakfast for authors who published their first book within the last year, and we all had our own tables. It was very well attended and moderated by Mike Befeler. He gave us a nice introduction and we stood up and gave a one minute speech about ourselves and our book. 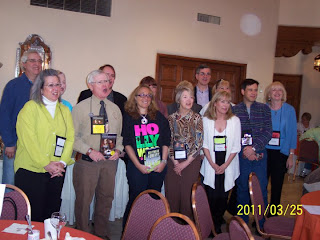 I attended two interviews. Martin Cruz Smith had bronchitis and was hard to understand at times, but what I heard was interesting and sometimes humorous. Margaret Coel’s interview was also very interesting, made so because she was interviewed by a long time friend of hers, author Craig Johnson.

Something of interest mention later on two lists and now several other blogs is the new subgenre title: THRILLZIE. More thriller elements for a cozy mystery, many authors who write this way are very excited to have the new classification.

My 'basket' for the auction got several nice compliments, had several bids and sold for $65. I was happy, and the proceeds went to a group that promotes literacy in New Mexico, Read West Inc.

We took a one and a half hour tour of Santa Fe in an open sided van. There are over or close to 100 galleries in Santa Fe. We drove down the street they were mostly on and sidetracked for a few others. Lots of wonderful art and could take up a whole week for art browsers to see it all. But it was very cold. When we got to the top of museum hill, it really was freezing, and even though the driver had provided blankets we were still very cold. One passenger had only worn a t-shirt and shorts. Burr. But that blue, blue sky and bright sunshine was perfect, especially since we left and returned home to rain. That 40 days and 40 nights thing has nothing on Portland OR. The famous square was loaded with jewelry stores at very high prices, but when you went in to look they always had a marked down price. Along one side of the square the Native Americans set up their tables and a lot of people shopped there--especially the ones who'd been to Santa Fe before and knew the difference in quality. I purchased an embroidered hoody that I thought was made locally, but it was made in Nepal!!! I know, I know, I should have checked. Oh well, I like the Nepalese and feel a bit sorry for them, but I should have checked. If I'd have gotten it home and found Made in China I'd have been royally P----d off!!!!

Hotel, La Fonda was right on the square, very old (“400 years of gracious hospitality”), it has an American Historical Hotel designation. Great art work in all the public rooms, many done by Ernest Martinez, and many of his pieces were shown in the program book by permission. Posters from the many festivals and art shows like the corridors that led to the rooms. It had two nice restaurants belonging to the hotel, and a back door into a crepe restaurant that was great for breakfast and lunch though it didn’t take credit cards. Nice shops, too, it had a shoe store to knock your socks off. Boy was I tempted.

Kaye George hosted a table at the banquet and we sat with her. She did sweet little gift bags that contained a peeler. I had to stare at it for a few seconds as I can’t remember the last time I bought anything that needed peeling. The woman sitting next to me was surprised as she peeled every day. I ask you, what is bagged produce for??? Oh well, the magnet clip for the refrigerator was perfect.

The return flight was just as efficient and on time as the outbound. Totally Bewildering! Should I rethink my preferred airlines??? Nah!

OMG, I forgot the one ordeal of the trip. I decided to drive instead of calling the shuttle owing to my pedestrian gates were broken and I had a coupon for a free day at a lot near the airport. Well! It was spring break, so when I got to the parking lot--IT WAS FULL, reservations only and begging got me nowhere. (Just when does that pathetic old lady thing kick in and get you stuff?) I had to FIND long term! I'VE NEVER PARKED IN THE AIRPORT LT LOTS BEFORE! Driving wildly, trying to find signs, I ran a red light and made a whole bunch of drivers (one on his cell phone-illegal in OR) very angry. (Yes, tried the old lady thing again, to no avail.) Well I found it, and had to drive and drive and drive (I felt like I was heading to the other side of the state) to find a spot. I had to drag the giant suitcase several rows to get to the kiosk only to find a sign that added insult to injury: Spring break rates were $14 a day instead of $10. UGH!!!!!!!!! However, when I returned (oh yeah, I couldn’t find my car--looked for 15 minutes) I was only charged $10 per day. Then I had to worry about finding my way back to my normal route home, but it was really a very quiet, late afternoon Sunday so I crossed lanes with impunity and got back to my familiar route with NO problems.

After years (and years) of listening to client reports of their trips, this isn’t the most straight forward report you’ve ever seen about a convention. So, I sorry everything.
Posted by Working Stiffs at 6:00 AM

Hi Pat -- enjoyed the travel report but it looks like there might be a word or two missing at the end? Your panels sounded great!

Pat -
Sounds like a great conference.
I'm still waiting for the little old lady thing to kick in, too, so here's a tip for parking at any airport - go to the section labeled "13" - there are always spaces because the suspicious folks avoid them; it's also easier to remember where you left your car, although I use a technique that never fails - I tie an invisible string from the back of my head to my car. That way, I can just follow the invisible string when I want to find the car again. Speaking of this woo-woo stuff, it's also possible to stay warm by relaxing into the cold - let yourself totally feel it and you'll find your body starts to warm up. [Of course, this may be the first step to hypothermia . . . ]

Sounds like a great trip. Thanks for the report.

I wish I'd been at the creating characters session. Sounds like spontaneous fun. Thanks for the report!

When/where is your next conference gig?

"I sorry everything" is a funny in my family. That's all there is.
Our lot is in Lettered sections, I knew I was in R7, but rushed so fast to catch the shuttle, I got turned around and wound up in S and U before I realized I was turned around.
Next gig? Well, I trying to decide between Malice and Crimebake. Didn't think I'd go back to Bouchercon, but it is in Ohio where I have friends and family.
Patg

Pat,
Informative post, thanks for all of the info about the conference. Just curious, was an example given of a published book that would be considered a "thrillzie?"

I enjoyed seeing you at LCC, Pat. What a great idea for your panel! As someone whose latest book (Deadly Currents) is probably a perfect fit for the new Thrillzie moniker, I can tell you that I'm not thrilled with it. It's just too cutesy for me. So sorry about the airport hassle you had to go through, but I'm glad you made it to LCC!

Pat, if you do make it to Crime Bake, we have to hook up. I'm collecting author autographs for Fish Tales. You, too, Beth!

It sounds like a really good conference. I love the idea of a historic hotel rather than all the new ones I've gone to. I had to laugh at your parking experience. I would be so panicked at missing my flight. All in all, your whole weekend sounded like a good experience. Gloria

A good description, Pat! It was a fun time. I enjoyed being on the panel with you and thank you so much for sitting at my table!

Maybe I'll see you at Malice.

You writing gives the feeling of being there. Thank you for the owl view of a fantastic experience as the result of hard work writing/publishing/being a top notch writer.