First, I want to express my appreciation to Joyce, Bente (who is in all of my Miranda books!), Annette, Paula and all my friends at Working Stiffs for letting me hang out! You guys rock, and I consider myself lucky to get to spend some time with you! :)

I’m actually just popping in between different weeks of a book tour ... the CITY OF SECRETS book tour, as a matter of fact. CITY OF SECRETS is the second Miranda Corbie book (following CITY OF DRAGONS, which I’m thrilled to say won a Macavity Award at Bouchercon last month!) We’re continuing to celebrate while traveling, and next week I’ll be in various cool places from Scottsdale to Thousand Oaks, California.

So, the title of my newest book begs the question: what kind of secrets? San Francisco secrets? Secrets about Miranda Corbie, the broken idealist and hardboiled PI of the series? Or secrets about 1940 and the American past that we didn’t learn in high school history books ...

The answer is all of the above.

Miranda Corbie is working the opening day of the second  San Francisco World’s Fair, held on beautiful Treasure Island in the middle of the Bay. Stage hands find her in front of Sally Rand’s Nude Ranch, where she works security, protecting the girls behind the glass wall from everything other than eyes ... to use those, you pay a quarter. Use anything else and you have to deal with Miranda.

Shaking in shock and horror, the stage hands from Artists and Models—another peep show near Sally’s, in which young women posed “tastefully” for people with cameras or sketch pads, in pseudo-artist model style—inform Miranda that the opening act, a young blonde named Pandora Blake, seems to be ... dead. Miranda finds the young girl with a long, deep stab wound, the kind made by an ice pick. Blood trickles slowly down her white skin. And on her stomach, written in blood, is a word: an anti-Semitic epithet.

Miranda is plunged into a secret San Francisco that she—and many people today—didn’t know existed. A San Francisco in which an organization of domestic terrorists and racists can meet in a bar off Union Square, express their sympathies for Hitler and hatred for Roosevelt and plot violence against the government.
The fact is, San Francisco and the West Coast were home to many such groups in the 30s and early 40s.

Long before “right-wing militia” became a term in the 70s and 80s—long before Timothy McVeigh was born—there were people who believed the United States was becoming degenerate, too big, too encompassing, and too tolerant. That the government was far too liberal. That the dictatorships and totalitarian regimes were on the right track, and that Adolf Hitler was a man to admire.

And they were willing to back up their beliefs with violence.

These groups weren’t Nazis. They considered themselves patriotic Americans, with names like Defenders of the Christian Faith or The Musketeers ... which is the group Miranda investigates.

And so she does, uncovering more secrets. Secrets about eugenics, and the dangers of California’s sterilization laws ... which in turn inspired Hitler. Secrets about the bucolic and beautiful Napa Valley, and the sleep little town of Calistoga, where claims of rejuvenation and health were made for the mud baths and spa treatments at Nance’s Sanitarium. And even secrets about herself, as echoes of the past reverberate unexpectedly through her investigation of two murders.

The background is a world at war. Belgium falls and France is falling. And through it all, Miranda’s at war herself, chasing shadows, leafing through the forgotten belongings of a dead girl, playing a mean game of roulette, and ultimately facing her darkest decision while on the track of a vicious, anti-Semitic killer. 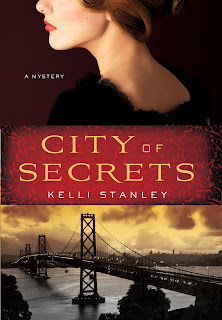 Real people make appearances in CITY OF SECRETS ... Sally Rand has a cameo in chapter one, and threatened to walk away with the entire book. The second real person is a surprise  (no spoilers here). The settings are real—from Nance’s to the Club Moderne to a nightmarish, castle-like mansion in the Napa Valley.

It’s a frightening, dark and thrilling noir, and the events of CITY OF SECRETS will reverberate through future books. What isn’t a secret is how much I love to write this series, and how I hope to continue writing Miranda forever.

So, Working Stiffs ... what I want to know is this: have you uncovered any secrets you want to share? Or do you have any questions you want to ask? Let’s play a blog version of truth or dare, and let ‘er rip! :)

Posted by Working Stiffs at 7:08 AM

Welcome back, Kelli! I can't wait to read this book.

Hmm. Secrets. I'm going to have to mull this over. I can't think of any!

Thanks for visiting, Kel! It was SO nice to see you in St. Louis, and so horrible that we didn't have more time to hang out! And how the hell did I miss that Macavity?! Congratulations, babe!!! You have no idea how honored I am to be in your books!

Welcome, Kelli, and congratulations on the Macavity!

Secrets? I don't think I have any but yesterday, my email password suddenly no longer worked, and Comcast informed me that my modem and email were no longer hooked up but they couldn't explain why. I couldn't either (and still can't) but I've been checking the sky for black helos, just to be on the safe side.

Congrats on the Macavity, Kelli.

Really want to read this book. Best of luck with it!

Book sounds like the kind of 'tween' books I like. One of the worst secrets I ever learned was how German U-boats were given supplies by people off the SC coast. I think more about the Bundt is coming out now. Did I spell that right, looks like a cake.
Patg

David Cassidy was too old and Donny Osmond was way too toothy. :)

BENTE!!! It was absolutely horrible that we had no time together. I couldn't believe it. I always think there will be plenty of time to do things and whammo--it's gone!!

Next year. I promise I'll stay the whole conference and we'll spend a day together!!! :)

And thank you--you grace the series with your name. Love you!!

Yikes!! Scary stuff, Ramona!! Does somebody else think you have secrets?? Keep us posted on these Comcast developments ... growing up with The Twilight Zone, Night Gallery and The Sixth Sense gave me a well-developed sense of the paranoid. Besides--just because you're paranoid doesn't mean they're not out to get you! ;)

Hi, Pat, and thank you for stopping by!! The Miranda Corbie series is a mixture--the pace is a thriller and the tone is both noir and that of a hardboiled detective novel, so in a sense it is between genres. :)

The German U-Boat story sounds fascinating, and I'd love to learn more about it!! Are there any books you'd recommend? Maybe it'll work its way into a future Miranda novel. Thanks again!! :)

OMG! Jack Wild was my big crush in 6th(?) grade. Then it was David Cassidy in 7th grade. We had to write our autobiographies and extend them to the year 2000. I married him. Thank goodness that didn't come true, lol! Then there was that Hardy Boy phase...

Woo-hoo!!! Another Jack Wild fan!! :) I loved the issues of Tiger Beat and 17 that featured Jack ... I also kinda liked Davey Jones of the Monkees. Even at a young age, I was a sucker for an English accent. :)

I knew it wouldn't work out with Jack Wild when I realized I was already a good six inches taller than he was.