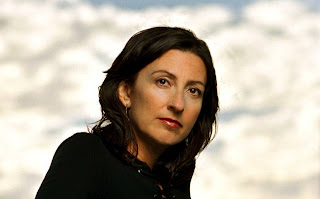 First of all, let’s get one thing straight. I don’t write in a clean, well-lighted room, as Virginia Woolf recommended. My computer desk sits in the walk-in closet off my bedroom. It’s a big walk-in closet, but still.
There is a window, but the shades are usually drawn because the light bounces off the computer screen and blinds me. There are papers and books and pens stacked everywhere, plus half-drunk cups of coffee and bags of opened potato chips and maybe a Kit-Kat wrapper nearby. There might be a cat on my lap, and a dog lying nearby, feigning sleep but watching me out of the corner of one eye in case I run out of steam and decide I need to rejuvenate by taking him on a walk.
That happened a lot about 18 months back, when I  was writing my new book  Damage Control, which deals with a political sex scandal, surf noir and the intense friendship between two teenaged girls.
As I wrote, a lot of celebrities and politicians were getting caught in scandal. There was golfer Tiger Woods and his endless parade of mistresses. Politician John Edwards and his love child with blond videographer Rielle Hunter. New York governor Elliot Spitzer and the call girl. What a pity, I thought, that by the time Damage Control comes out, all these sex scandals will be forgotten and there will be no timely news hook for me to talk about in interviews and guest blogs like this one.
So you can imagine my surprise (!) this summer when the Arnold Schwarzenegger love child scandal broke, then Weinergate. If I proposed either of those plot lines to my editor, she’d dismiss it with a wave of her hand, saying that such things are preposterous and that readers would never believe it.

But if there’s one thing I learned in this old life of mine, it’s that politicians and sex scandals go together like bread and butter. They are always with us! Adding murder to the mix is rarer in real life -- thank goodness, but consider the Chandra Levy murder. She was a government intern who was carrying on a secret affair with a married California Congressman named Gary Condit. When Levy’s body was discovered in a wooded park near Washington DC, there was much speculation about whether Condit had killed her, perhaps to keep her from going public with the affair. But in the end another man was charged with her murder. But in the meantime, the revelations about their affair destroyed Condit’s career and much of his life.

So when I was writing Damage Control, I realized that a powerful, married politician would have ample motive to kill (or order the murder of) his young mistress if she threatened to go public with an affair. And that was the genesis of Damage Control. The question is, did my fictional Senator Henry Paxton kill the beautiful young staffer who is found murdered as the book opens? And can Maggie Silver, the young woman hired to run damage control on the scandal, believe what the Senator tells her?

And just to make things more interesting, Senator Paxton is the father of Maggie’s BFF from high school. Annabelle and Maggie have this crazy intense relationship, the kind you can only have in adolescence when everything is so new and raw and filled with meaning. They wear each others’ clothes and eat the same things and listen to Tori Amos obsessively and do their homework together and spend every weekend at Annabelle’s big house overlooking the Pacific, scoping out the beach parties. And then one night something unspeakably awful happens at one of those parties that will haunt their lives forever.

Fifteen years later, Maggie, now an ambitious young PR executive, walks into her firm’s conference room and sees Annabelle’s Dad standing there. Welcome to your new client, Maggie. And welcome back to the nightmare you thought you’d safely tucked away forever. Because re-connecting with the Paxton family is going to bring everything back out into the open.

Writing the scenes with Maggie and Annabelle as teenagers was very intense and I’d find myself slipping back into that adolescent mindset where my emotions churned all the time. The dog liked it when I wrote these scenes, because he got a lot of walks out of it.

There aren’t any dogs in Damage Control, alas, but there are two cats -- giant Maine Coon cats, because I’ve always wanted one. Or two. I live in a hilly area of Los Angeles were we can’t let our kitties out because there are coyotes who roam at night, and they’d be potentials meals.
But I think two Maine Coons could take on a coyote. Or at least make him back off and go running back to the hills.

So it was a little bit of wish fulfillment.

I hope you enjoy Damage Control. And I’d love to hear what you think. 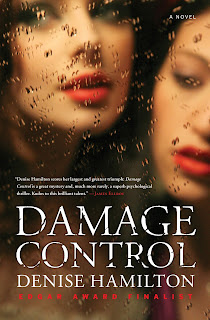 Denise Hamilton writes crime novels and is editor of Los Angeles Noir, an anthology of new writing that spent two months on bestseller lists, won the Edgar Award for “Best Short Story” and the Southern California Independent Booksellers’ award for “Best Mystery of the Year.”

Denise’s new novel, Damage Control, will be published by Scribner on September 6, 2011 and has already received raves from Kirkus (In a novel that marries celebrity culture, surf noir and the bonds of friendship, Hamilton is at the top of her game) and James Ellroy (A superb psychological thriller). She has five books in the Eve Diamond series and her standalone book “The Last Embrace,” set in 1949 Hollywood, was compared to Raymond Chandler.

Denise’s books have been shortlisted for the Edgar, Macavity, Anthony and Willa Cather awards. Her debut “The Jasmine Trade” was a finalist for the prestigious Creasey Dagger Award given by the UK Crime Writers Assn. Hamilton’s books have been BookSense 76 picks, USA Today Summer Picks and “Best Books of the Year” by the Los Angeles Times, the South Florida Sun-Sentinel and the Toronto Globe & Mail.

Prior to writing novels, Hamilton was a Los Angeles Times staff writer. Her award-winning stories have also appeared in Wired, Cosmopolitan, Der Spiegel and New Times. She covered the collapse of Communism and was a Fulbright Scholar in Yugoslavia during the Bosnian War. Hamilton lives in the Los Angeles suburbs with her husband and two boys.

She also writes a perfume column for the Los Angeles Times.
Posted by Working Stiffs at 12:01 AM

Will there be any more Eve Diamond books? Eve is a great character. And I loved The Last Embrace. Have you thought about writing a series set in the 40s?

Thanks for visiting, Denise! Your book sounds fascinating.

I write in a closet, too, incidentally. About Maine Coon cats, since I can't have any myself. Allergies, yanno.

Hi everyone. I hope there will be more Eve books. I have about 1/2 of one written, but it's a matter of time and what the publisher wants next. Some people have also suggested a prequel to The Last Embrace and also a sequel to Damage Control. Wish I could do them all at once but with two kids, it takes me at least a year and sometimes almost three to write a book these days.