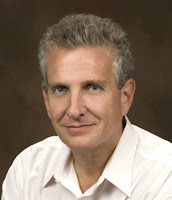 When a target shooter, hunter, or sniper pulls the trigger, a lot of elements and factors are drawn together in a amazing way. Physics. Geometry. Weather. But the most important element is the human element — the skill of the person behind the gun.

To understand what’s really happening, let’s break it down into those three elements first. Physics, geometry, and weather. I’ll have to be brief. To cover the subject in detail would involve a novel length article, and my knowledge of the subject is limited. There’s an entire scientific industry devoted to the study of ballistics.

Let’s start with physics and the “fire triangle.” We all know a miniature explosion takes place to “fire” a bullet. To get fire, we need three things. Heat, oxygen, and fuel. If any one of those components is missing, there’s no fire. You can have a tremendous amount of heat and fuel, but without oxygen, you won’t have fire. That’s why explosives are used to extinguish oil well fires. The explosion creates a very brief vacuum in the air, removing the oxygen. With no oxygen, the oil fire dies. Most vegetation and structure fires are extinguished by removing the heat. Take away the heat, no fire. The fuel and oxygen are still present, but the heat is gone. A carbon dioxide extinguisher removes two elements of the fire triangle, both heat and oxygen.

What does this have to do with shooting? You might be wondering how a bullet works. At first glance, it looks as though a critical component is missing. Oxygen. If a bullet is like a sealed jar, where does the oxygen come from? How does the miniature explosion occur if there’s little or no oxygen inside the bullet. The answer is simple. The oxygen is contained within the gunpowder itself, in chemical form. After being struck by the firing pin, the little round primer at the base of a bullet completes the triangle by supplying the interior of the cartridge with heat.

The resulting explosion drives the bullet through the barrel of the gun. The pressure is tremendous. It takes a lot of force to overcome the friction of pushing a bullet through a steel barrel. I once had to remove a stuck bullet after a misfire. It took a steel rod and a lot of labored hammering to dislodge it. 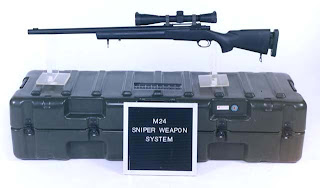 The geometry of precision shooting is perhaps the most interesting. At medium to short distances, gravity is the biggest factor affecting a bullet’s trajectory. Picture a concept in your mind. You’re holding a rifle and pulling the trigger. If it were possible to drop the rifle at the precise instant the bullet left the end of the barrel, the bullet and the rifle would hit the ground at the same time. Why? Because once the bullet is free of the barrel, gravity begins to pull it toward the ground. It doesn’t matter if the bullet is traveling downrange at 2,500 feet per second, the bullet is still “free falling” as surely as if it were dropped from your fingertips.

So to hit a target at a long distance, you have to shoot at a “theoretical” point above the target. Let’s use an easier example. A football game. The quarterback throws the ball to a receiver 30 yards away. If he aimed directly at the receiver, the ball would hit the ground before arriving. Without thinking about it, he aims 20 feet above the receiver’s head, but because gravity pulls on the ball once it leaves his hand, it ends up in the receiver’s grasp. The same principal applies to shooting, the bullet’s arc through the air is just much longer and flatter. Also, when a quarterback throws the ball, he’s not looking at the theoretical spot above the receiver’s head, he’s focused on the receiver.

A rifle sight works the same way. When using an adjustable iron sight or optical scope, you’re always focused on the target — the direct line of sight. If you raise the rear site by half an inch, you also have to raise the front sight by half an inch to maintain the “line of sight” But since the front sight is fixed to the barrel and isn’t adjustable, you tilt the end of the rifle up to maintain your line of sight to the target. The barrel is now pointing at a “theoretical” point above the target. Like the football, the bullet will now travel in an arc to the target.

We’ve looked at physics and geometry, what about weather? Wind is the primary weather concern and it works similarly to gravity. Wind can have a significant affect on a bullet’s trajectory at long distances, especially at 1,000 yards and beyond. Wind works a lot like gravity. Once the bullet leaves the barrel, wind begins to push the bullet left or right, and some cases, when you’re shooting across a canyon, it can push a bullet up or down too.

If you have a crosswind blowing from right to left, you’ll need to move the adjustable rear sight to the right to compensate for wind. But once again, in order to maintain the “direct line of sight” to the target, you’ll also have to move the fixed front sight by half an inch to the right. Even though you still see the target directly ahead, the barrel of the rifle is now pointing at a theoretical point to the right of the target. Once the bullet leaves the barrel, the wind will act on the bullet and push it back toward the left. Make sense? So, at extreme long distances, you’re aiming at a point above and to the right of your target. Once the bullet’s free of the barrel, gravity and wind will then move the bullet along is desired trajectory. Think of the quarterback example again, if he has to throw the football with a strong crosswind present, he’ll compensate for the wind, by aiming slightly into the wind.

The same principals apply to pistol shooting as well. Because the ballistic speeds are generally subsonic, gravity and wind play a more significant role on the trajectory.

This is where the last element comes in. The human element. There’s no substitute for practice. The old expression, “how do you get to Carnegie Hall?” applies. Without exception, you’ll have to fire countless thousands of rounds in many differing weather conditions to be come a master marksman. Shooting a target at 100 yards in optimal conditions is child’s play compared to shooting the same target at 1,000 yards. The difficulty isn’t proportional to distance. It’s not 10 times harder, it’s 100 times harder. Predicting the wind correction is by far the most challenging aspect of long distance shooting, and it only comes from experience.

As an example, at 1,000 yards, you might have wind blowing right-to-left close to you, but at the target, it might be blowing left-to-right. Which wind is more important? The answer is, the wind at the target. Why? Because the bullet is moving slower at the target. Air friction has slowed the bullet down. If a bullet leaves the barrel at 2,500 feet per second, it may only be traveling at 1,800 feet per second at the end. A slower bullet is affected more by wind than a faster bullet.

It’s one thing to be lying perfectly still in ideal, comfortable shooting conditions. Add a few environmental conditions into the mix and it becomes a much more challenging situation. Rain. Snow. Humidity. Forests. Deserts. Jungles. Mountains. Each environment has it’s own set of problems and variables to overcome, and no two missions are ever the same. Each will be unique and the shooter will have to adapt to each.

Now, let’s add another layer of stress and difficulty to the fray. Throw in unfamiliar “enemy territory.” Not only is a sniper dealing with everything we just talked about, but he’s probably surrounded by enemy soldiers hell bent on hunting him down and killing him, or worse. Needless to say, a sniper’s best tool is his ability to be invisible, both before, and after the shot. Stealth is a sniper’s best friend. Marine Corps snipers are arguably the best sharpshooters in the world. 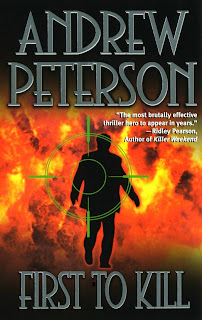 In my debut novel, First to Kill, which launches in September, my main character, Nathan McBride, is former Marine Corps sniper with 57 kills under his belt. The climax of my story involves a intense, long range sniper duel between Nathan and a highly skilled opponent, a former Army Ranger.

More information about First to Kill by Andrew Peterson, can be found at AndrewPeterson.com

Posted by Working Stiffs at 6:00 AM

Makes me wonder how anyone hits anything with a gun . . .

Thanks for the great information, Andy.

For awhile I thought my pre-med student son, Josh, would end up being a sniper. When he was about three years old, he wanted in the worst way to see the movie, "Sniper." We wouldn't let him. Then when he was about 12 or 13, he and his friends would play a modern version of cops and robbers. He'd dress up all in black and slink around carrying one of those air guns that look like an MP-5. A doctor is probably a safer career.

"If it were possible to drop the rifle at the precise instant the bullet left the end of the barrel, the bullet and the rifle would hit the ground at the same time."

Andrew, Great blog. I'm an engineer and although I know gravity works on a bullet, I never thought about it in those terms.

I don't think you're getting many comments because we're all so overwhelmed by your detailed information that we don't know what to say!

Tory, Joyce, Wilfred, and Gina: Thank you for the nice comments. I'm sorry for not responding sooner, but I'm tied up at BEA Los Angeles all day. I just broke away to login. I really appreciate the kind words.

Rifle shooting is fun, but it's some work too. Thanks again everyone... More later after the dust settles!

Will Bereswill's tips for writers were very insightful. But, this writer is full of surprises. I had no idea Will had such an exciting private life, as evidenced in his opening remarks.
To Will--Nice photo of your heroine, Will. I can't wait until your book comes out--sounds like a bestseller!

I found your article to be very interesting. I have read many books pertaining to the history and physics behind long range marksmanship, and I really like how you summarized the key points. I look foward to reading you book

The bullet and gun falling anology is technically correct, for an unriftled barrel,or in a vaccum, but due to the rifile of a marksmans barrel, the spiral will use the air to some what counter act gravity.