I want to thank Annette for allowing me to post on her normal day. The subject matter seemed appropriate for this week.

The Chinese are wonderful people deeply rooted in family, tradition and superstition. They use the week-long Spring Festival to travel to the their family homes and celebrate the coming of the New Lunar Year. On January 26, 2009, out went the year of the Rat and in comes the year of the Ox. They eat Jiaozi (steamed dumplings), set off fireworks, and give money wrapped in red paper or placed in red envelopes. Although the business world recognizes seven days for the National Holiday, the entire process takes weeks to prepare for and to celebrate.

There are six major activities undertaken by the Chinese during the Spring Festival:

Dusting - This refers to year-end cleaning, which also carries the meaning of sweeping all “bad lucks” or “evil spirits” out of one’s house.

Pasting - To paste New Year pictures and the character of “Fu” (bliss) on gateposts, door panels and windows.

Inviting - To invite the gods of kitchen and fortune.

Staying up - In the past, for the old, staying up all night on the New Year’s Eve meant to cherish fleeting time, and for the young, it meant to pray for a longer life for parents.

Greeting - Greetings must be given to older generations and exchanged among the same generation.

Playing - By playing the dragon dance people pray to the god of the dragon for good weather and rich harvests.

On this holiday, 180,000,000 people travel to their homes, about fifteen percent of the total population. With this many Chinese taking to the highways, rails and skies, travel during this time of year is a bit of a chore and takes the patience of Job.

As I mentioned, I happened to be in China just prior to the celebration of the year of the Rat and to complicate matters, the week before the Festival was fraught with horrible weather throughout the midsection of the country. In GuangZhou, 600,000 rail travelers were stranded at the train station. They huddled under the highway overpasses to seek shelter from the 40 degree temperature and cold rain. 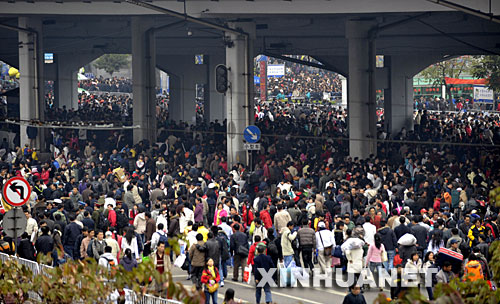 Yes, our car went right under this overpass. Right through these people. We were returning from a round of golf and our host thought it would be fun to see what kind of crowd was actually there. 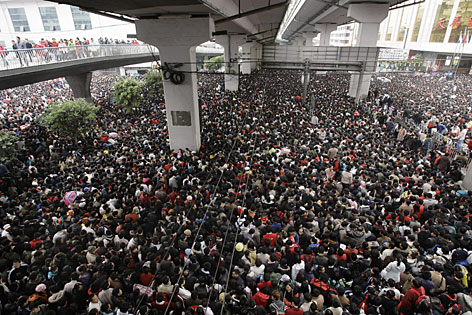 I know because my route that day took me by car right through the sea of humanity. It took us two hours to go a mere one kilometer, with the driver using the bumper of the car to nudge people out of the way. Yes, I was thankful to have transportation at all. You may have to stretch your memory a bit, but it made the national news (not me and my driver pushing through the crowd.)

Outside of Wuhan and Shanghai, 100,000 travelers were stuck on trains in-route; going 20 hours without food or water as the electrical lines powering the trains shut down because of the heavy ice and snow.

All over China airlines delayed and cancelled flights stranding even more passengers at the airports. Again, I have firsthand experience here. I traveled from GuangZhou (situated in the far south of China) to Qingdao (perched on the coast of the Huang Hai, Yellow Sea in the northeast), to Harbin (in its frozen setting in the extreme northeast) to Beijing. Normally quiet airports were bustling with crowds. And when I mean crowds, I mean there is not one square foot of floor space unoccupied. I mean that the space we normally reserve as ours, between us and the person in front of us in a line would have at least ten Chinese squeezing in. The noise level is deafening and the uninitiated would definitely freak out.

A little more about lines in China. There are none. With the exception of immigration at the airport, lines just don’t exist in China. The rest of the world would consider it rude, but in a country of people that has had to scrounge and fight for sustenance, like puppies fighting for mother’s last nipple, the culture accepts the chaos. Normally calm people turn aggressive. I’ve seen a few arguments, one or two shoving matches, but for the most part, peaceful aggression. Even so, this is no place for the timid laowei (foreigner).

On my last day in China, I arrived at the Beijing airport. My travel was supposed to take me to Shanghai, then on to Chicago and finally St. Louis. So I set out for the domestic side of the Beijing airport, a big, but necessary mistake. I should have realized that I was in for a long day when at 7:00 AM it took twenty-five minutes to get through the toll gates at the entrance of the airport to the drop-off point.

That long, long, long day never got me to Shanghai, which was closed again due to weather. By noon, I realized that I would have to fly out of the country from Beijing. Another big problem. I was traveling on an American Airlines frequent flyer ticket and they only flew out of Shanghai. Calling my travel agent I found out that a one-way first class ticket was $13,000 on United and a Business Class ticket was a mere $10,000. I called my boss and he said to have a good time in Beijing for the weekend. Only there were no hotel rooms. I settled for a Coach ticket at less than $1,000. Don’t feel sorry for me, as it turned out, I flirted with the ticket agent (a beautiful, petite Chinese girl.) “Ni hen piao liang.” “You are very beautiful.” And “Ni de Yingyu hen hao.” “Your English is very good.” No sexual harassment laws in China yet. And go figure, I scored a free upgrade as a valued member of United Airlines highest level of Frequent Flyer.

I managed to fight the crowd once again and retrieve my checked bags.

Ever try to retrieve checked baggage?

Think about retrieving luggage you just checked on your best day. Now think about it when traveling in a foreign country and from people who don’t speak English and are at the end of their wits trying to satisfy a raging mob of people all trying to get to their destination in a country whose transportation system was all but iced in.
This is what I love about China. Many of them are caring and compassionate people. I nudged my way to the ticket counter and after a few minutes displaying lost puppydog eyes, a very nice... yes, a pretty Chinese girl again... helped me out. An hour of waiting and amazingly, I had my luggage. After rearranging my travel, I actually made it home on time. The paradox of arriving in Chicago before I left Beijing always confuses me; a thirteen hour flight with a fourteen hour time change. 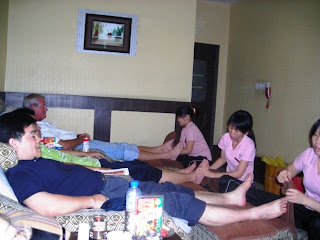 This isn't in the airport, but this is a picture of my friends and I receiving a nice foot massage.

By the way, I was in the Beijing Airport for ten and a half hours. I had some extra RMB (Chinese money) so I got myself a bowl of noodles and a cold Budweiser, made at my brewery in Wuhan and then got a very relaxing massage.Reflecting back on that trip, I now realize that it may have been my last trip to China. I have some very good friends there that I may never see again and that hurts. Somehow emails just aren’t the same. This week, China is celebrating and my heart is a little empty because I can’t be there amidst the chaos to celebrate with them.

Happy Chinese New Year, everyone and may the Rat help us prosper.
Posted by Working Stiffs at 10:09 PM

Tales of iced-out transportation seem so appropriate on a day like today, where snow and freezing rain are coming down and two of my friends are flying to places warm (Tucson and Florida, respectively.)

I have a big workshop which is the fruits of a seed grant I wrote scheduled for this afternoon. My presenter called yesterday, wondering about alternative plans. Where I work, the alternative plan is, "Wing it!" And probably nobody else will be in today to give me advice. Sigh.

By the way, Wil, what does the year of the Ox portend?

I have to admit though, that China is one of the last places I'd care to visit. I have no desire to go there.

And that arriving home before you left thing? That would completely mess me up.

Yes, Tory. The post wound up being appropriate in several ways. Snow just moved out after 2 days here in St. Louis leaving us 7 inches of snow and ice.

I had my job interview delayed yesterday and I'm supposed to attend a job fair today. I just got done with the driveway and now I need to get ready to brave the roads.

I check up on the year of the ox.

Joyce, I was apprehensive about going to China at first. In fact, if I had merely gone to the big cities, I would not have the same affection as I do by traveling the countryside and getting to know the people and the culture.

I'm off to get ready for the job fair. I'll check back in this afternoon.

Very educational and entertaining, Wil. Thanks for sharing! I, too, am curious about what the year of the Ox portends and am looking forward to seeing your answer later. I hope the job fair goes well.

Yes, I too am curious about what the year of the Ox means.

Fascinating stuff, Will. What amazing memories you have and that you'll carry with you forever

Will, you are such a flirt! Getting upgrades and perks by sweet-talking those cute Chinese girls. Tsk tsk.

It's actually a very good thing that you took my day today. I was without Internet service for most of the day, thanks to the ice storm here.

Hope you had a successful job fair. Stay safe everyone! And Happy Chinese New Year!

For what it's worth, my word verification is FUGSFIST.

say that this festival in China is one of the best!

the picture of the fire work exhibition is from australia and not from china!