Hi, everybody! It’s wonderful to be back among my Working Stiffs buddies, stretching my legs in front of the electric fireplace in Annette’s RV. ;) Ha! I loved that post … I remember when camping meant camping, and don’t talk to me unless you’re willing to compare mosquito bites. ;)


Seriously, thank you all so much for having me over! Blog tours are not only fun visitin’ time, but one of the few occasions when authors get to pretend we’re famous and making the rounds of talk shows to talk about our next vehicle. ;) In my case, of course, it’s CITY OF DRAGONS—my second novel, first in a new series, and Bente’s god-child, because she let me borrow her (real) name for a character--Bente Gallagher, an old friend of Miranda Corbie, my PI protagonist. Cool, huh? But I owe the inspiration for the character completely to Jennie. When I heard her real name, I *knew* my Bente—she sprang fully formed.

In my case, I’m following up a blog tour at some of my favorite hang-outs with a face-to-face tour on the West Coast. And I’m trying to figure out what sections of the book to read. I confess that I like reading—I was a Drama major, after all—but CoD has a lot of dialog. What do you guys think? Do you like dialog scenes read aloud or straight prose? Any preferences? Any dislikes?

I’m kind of nervous, as this is my first chance to actually see my book in a lot of stores-- NOX was distribution-challenged. So I’ll be hoofing it like a chorus girl, up and down the coast, talking about 1940 San Francisco and noir and Chinatown and … oh, yeah. Probably the point I’ll get questioned on the most: Miranda was an escort before she earned her PI license.

“Escort” means a lot of things to a lot of people. Most people assume it means she was a prostitute. Some have labeled her a call-girl. I’ve already been asked “Did she or didn’t she?” and the book’s not out until February 2nd …

The truth is that Miranda is an extraordinarily complex woman. I honestly don’t feel like she’s a creation at all—more like a writing partner. She’s someone I know well, but even I don’t know all the answers.

By the time CITY OF DRAGONS opens in February, 1940, she’s already been through:

A rough childhood. The Jazz Age and bootleg gin and women’s emancipation. The Great Depression. Teaching English to dirt poor dirt farmers. Falling deeply, deeply, deeply in love and volunteering as a nurse in the Spanish Civil War. Losing her lover—and herself.

Then there’s the escort experience, working for Burnett, a sleazy detective and her old boss … and finally, the Miranda of CITY OF DRAGONS.

You only get bits and pieces of her backstory, and that’s as it should be. I’m hoping to write about Miranda for a long, long time, and I’ve got some prequels in mind (one is already going to be published—a short story called “Children’s Day”, set almost a year earlier than CITY OF DRAGONS. It’s proud to be included in the next ITW anthology, FIRST THRILLS: High-Octane Stories from the Hottest Thriller Authors—releasing June 22 from Forge). 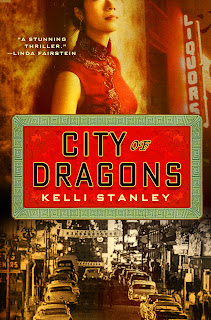 So what can I tell you about Miranda? She’s private. She means a lot to me. And I don’t violate her confidences. But I know this: that as a thirty-three year old woman in 1940, she, too, is a working stiff. And whatever she did, she worked damn hard for the money.

Thanks for reading, guys—and thanks again for having me on Working Stiffs!

CITY OF DRAGONS will be released from Thomas Dunne/Minotaur on February 2nd. You can order your copy here.

Kelli, my hubby and I once camped in a lovely, secluded spot next to a bay. We soon learned why such a lovely spot was otherwise unoccupied and renamed the place Mosquite Cove. Yeah, I'll compare mosquito bites with you!

It's good to have you back here, Kelli. City of Dragons sounds fantastic. I can't wait to read it!

Thanks for dropping by, Kelli. Your newest sounds fabulous!

We're always happy to have you here, Kelli!

I've been on a 1940s kick for awhile--since even before I found some things my mother wrote--so I can't wait to read CoD.

Seriously, people, you have to read this book. I have had the pleasure of getting an ARC - I'm in it, after all, and letting someone use your name carries some privileges - and let me tell you, it's amazing!

Thanks for visiting, Kel!

Kelli, welcome back! Always great to see you, and can't wait to read City of Dragons!

Welcome back, Kelli. I'm looking forward to reading City of Dragons.
There is something worse than mosquitos, you know: tent caterpillars. I once had the horrifying experience of trying to wilderness camp in an infested area - they jump out of trees and squash themselves on your head. Yuck. My friends and I ended up packing up our stuff and hiking out in pitch darkness - no light whatsoever except one flashlight - rather than stay there being bombarded.

I remember waking up once after camping with my parents when I was 10 or 11 and finding my face and neck had swollen so much in the night that they had to take me to the doctor immediately ... some kind of allergic reaction to something creepy-crawly.

Ah, the joys of camping! ;)Thanks for the comment, sweetheart!

It's always so much fun to get to hang out on Working Stiffs, I wish I could bring food and make it a potluck! ;)

Joyce, this is so cool ... I didn't know your mom wrote!! What did you find? Anything you can tell us about?

The late '30s and early '40s was such a twilight time -- and the period has always haunted me, so writing CoD was a dream come true. The sequel takes place three months later, and I hope to write some prequel novels, too.

Thank you, babe. CoD's a very lucky child--best godparents in the business. :)

Thanks for the welcome hug, Paula!! :)

I LOVE starting a week with you guys!! :)

Oh, Gina ... the thought of tent caterpillars makes me shudder!!

I've got an aversion to insects crawling on me, dropping on my head or biting me ... ;)

Chiggers are pretty bad, too. I encountered them in Texas, when I attended college in Dallas for a short time. Just walk through the grass, and these tiny bugs (larvae, I think) burrow into your skin. They die, you break out in bumps and itch like you've got chicken pox.

Nasty, nasty, nasty ... those RVs are looking better and better. ;)

I love dialogue. I want characters to talk to each other and say what has to be said. If the plot is too thin that saying what has to be said ruins the ending, then the ending has to be re-thunk!
I want a lot of talking.
I tend to do talking heads, then go back and fill in the action.
Patg

Kelli, Mom was never published, but she wrote a lot of poetry. One of my sister recently found a box that had part of a novel written on small tablet paper, and a journal entry from December 7, 1941.

I wrote about it here:
A Glimpse Back

Kelli, darlin', there's no need to blush. I'm just telling it like it is. I foresee another Bruce Alexander nomination next year...

BTW, Kelli, I believe I spotted you in a picture I took at Lee Child's "Jack Reacher" party at Bouchercon in Indianapolis.

Wilfred, I'm sure it was -- I wasn't at the Slippery Noodle for long, 'cause it was getting a bit claustrophobic, but you know me -- point me in the direction of a party (especially Lee's) and wind me up and I'm practically the Energizer bunny. ;)

One reason I love it here on Working Stiffs!! ;)

I thank you, Miranda thanks you and Bente thanks you. You know, the "other" Bente. ;)

Joyce, that is just one of the coolest stories ever!! You are continuing and fulfilling your mom's dream ... wow. I've got chills. :)

Big, big kudos to both of you, sweetheart!!

I like dialog, too! Very important, particularly when you write screenplays.