On Monday and Tuesday, Gina and Martha wrote about their experience at the Firearms 101 Workshop we put on. I figured I’d stick with the theme and share the photographic evidence of our trip to the firing range.

But first, a disclaimer. You may already know that my dear Hubby hates when I blog about him. He generally refuses to let me post photos of him. So don’t anyone tell him that he made it onto Working Stiffs.

The day began with Max and Ray (AKA Hubby) of the McDonald Sportsmen’s Association sharing their expertise with us. From the very basics of showing and explaining the difference between pistols and revolvers, rifles and shotgun, to the more advanced discussions of ballistics, they patiently answered our beginners-level questions and let us examine and study a wide variety of their weapons collections. Myths were busted. We even got a history lesson or two.

Here we have Max answering some of Martha’s questions. 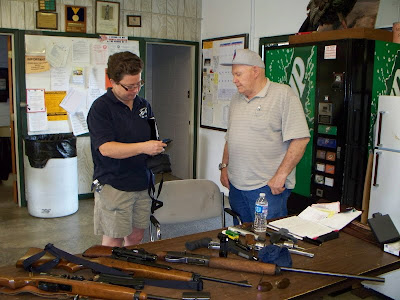 But the real fun came after lunch when we headed outdoors to the firing range.

Here’s Nancy Howarth shooting a .22 rifle for the first time. No, it didn’t kick. 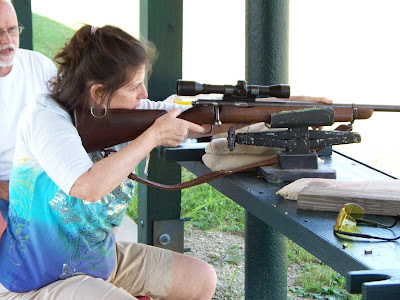 And here’s Sherry firing a .22 target piston under the instruction of that guy who shall remain nameless. 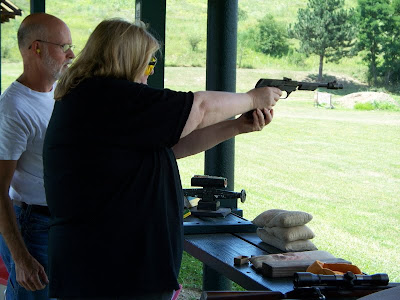 Martha looks like an expert with that target pistol. 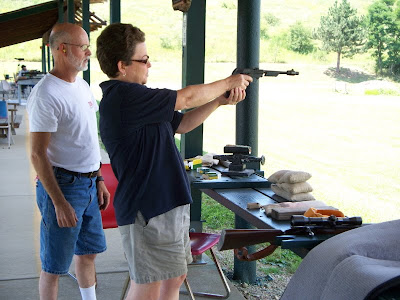 Not to brag…and there aren’t any photos of me to prove or disprove it…but I impressed the heck out of my hubby with that pistol. Heh.

Then there was the .38 revolver. 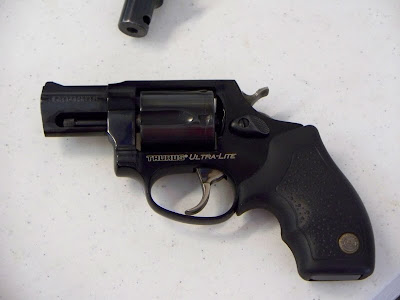 Innocent-looking little thing. My favorite part of the day was the look on Martha’s face when she shot it. Appearances are deceiving. This little bugger packs a wallop.

But the real star of the day was Tamara. She covered all the territory, not to mention time periods. It wasn’t part of the plan, but a fellow using the range at the same time we were offered to let Tamara shoot his 50 caliber sniper rifle. And she took him up on it. After all, how many opportunities do Working Stiffs get to do that kind of thing? 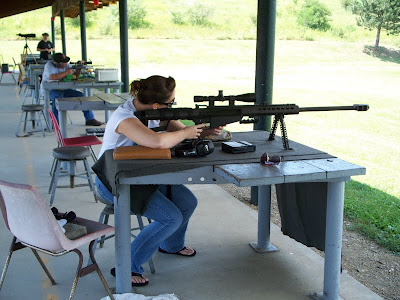 This beast has been known to hit a target at a mile and a half. Impressive to say the very least.

The guy’s friend also let her shoot his AR-15. 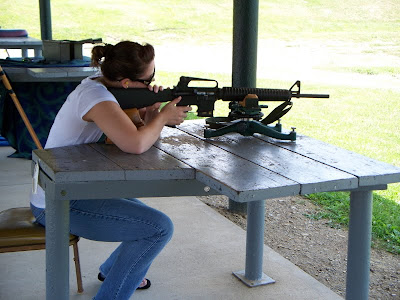 And just so all the bases were covered, she even tried out the atlatl, a prehistoric spear throwing weapon 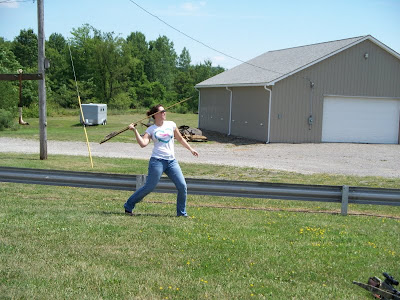 I’m glad everyone enjoyed their venture out to the countryside. I do think we provided the guys with a considerable amount of entertainment value, too.
And thus concludes our Working Stiffs field trip to the wonderful world of weapons.
Posted by Working Stiffs at 4:35 AM

Thanks for posting the pictures. I still smile when I think of our fun that day - and so informative. I know I'll never look at weaponry the same way. My whole idea of 'armed' has been turned on its head, thanks to Max and Ray!

I'm sorry I had to miss all the fun! Shooting is a blast. Literally.

Martha, I keep telling you I know all the cool places to go! And no flood this time!

Joyce, we missed you.

Thanks for posting the photos, Annette, although I notice you didn't take any of me . . .
Anyway, brings back good memories to see them, especially that cannon Tamara fired.

Never let it be said that this group is boring.

I'm sorry, Gina. Fire the photographer! Of course, there are no photos of me, either.

Well, Ramona, it SOUNDED like a cannon. FYI, I have been around real cannons when they've been shot, back when I was doing the living history stuff with Hubby. No live ammo in that case, though.

Oh my gosh, this blog is a writer's dream, Annette. And that .22 looks big. Funny that .38 does look harmless but it does pack a wallop. Glad you had fun... Question. How come you got the guy who would be nameless but there's not one photo of you? Great field trip post.

Donnell, because I was behind the camera. ;-)

The .22 pistol looks big because it's a target pistol...snazzy tricked out grip and all. The .38 is no frills, all business. BOOM!

Fantastic! Not only does it look like you had a blast, but I bet you learned a ton as well :)

Annette -
I'm really glad you got the photo of Tamara with the atlatl - it's hard to envision exactly what is meant by a "spear thrower."

Tamara must be young, single and beautiful for the boys to share their toys! LOL

Gina, I was thrilled that shot of Tamara with the atlatl turned out. I was using my little camera with the delayed shutter, so it's a gamble as to what you're going to get. Sheer luck!

Jemi, it was definitely a blast...in more ways than one! And even I (who have lived with this stuff for ages) learned a thing or two.

Great pictures. We really all should have at one time or another in our lives held a gun and learned something about them. Keeps the nonsense and fears down, and let's us hear discussions with a practical and learned ear.
A discussion on TV a few days ago talked about Britian having one of the toughest gun laws in the world, and their crime went up after it was enacted.
Hmmmm.