Good morning, fellow Stiffs! A treat for you this morning: please welcome my buddy Phyllis Gobbell, here to talk to us about writing True Crime. Her second book, A Season of Darkness, the story of the Marcia Trimble case, is hitting stores today. Here's the Wikipedia page on Marcia, since I guess a lot of you aren't familiar with the story, or may want to refresh your memories.

In the south, people like to ask, “Who are your relatives?” Just last month I was at a conference in Oxford, Mississippi. The first evening as I left my hotel room, heading for our first meeting, a woman was coming down the hall. We said hello and established that we were both going to the same place. In the second minute we established that she lived in a town just a few miles from where I grew up. In the next two minutes we established that we knew the same people, and in fact we had some of the same relatives. By the time we reached the elevator, we were calling each other “Cousin.”

It occurred to me that “Cousin” is a good way to express how True Crime relates to Crime Fiction. True Crime is not fiction, but if you’re a reader of both genres, you can tell that they come from the same family. 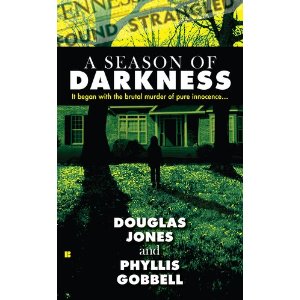 Only in the past five years have I written, or even read, True Crime. I’m not sure why I didn’t choose that particular genre. Maybe I imagined it would read like a series of newspaper accounts. As in any other genre, some writers are better than others. Once I began reading the best writers in True Crime, I was drawn to the writing style.

True Crime makes use of fictional techniques, like scene and dialogue. The first rule of the fiction writer’s handbook about showing instead of telling is a good one for all kinds of writing. There are passages in True Crime that must, by their nature, be expository, but, overall, the story should read a lot like fiction. Like fiction, the characters in True Crime carry the story, and the complexities of plot keep the reader turning pages: not just what happened, but why, and what the impact of the events was on the people involved.

In A Season of Darkness, which I’ve written with Doug Jones, it was a challenge to weave all the threads of thirty-four years, the length of time it took to solve the crime. Early in the book, we introduce several crimes that take place within five miles of Marcia Trimble’s neighborhood, where she was found murdered. We introduce the man who is convicted of one of the brutal rapes and sent to prison. But it’s toward the end of the book that the connection with Marcia Trimble is made. In the meantime investigators pursue another suspect. At the heart of it, the story is a mystery.

I never set out to be a True Crime writer. In fact, I was working on a mystery set in Provence when one of Nashville’s two most notable real-life mysteries came back in the news. Perry March, whose wife, Janet, had disappeared in 1996, was being returned to Nashville from his new life in Mexico. Nearly a decade had passed; Janet had not been found; her body had not been discovered. When Perry was charged with her murder, the question resounded: Can he be found guilty if there is no body? Perry began to “shoot himself in the foot,” so to speak, and as the case took a strange turn, another writer-friend of mine, Mike Glasgow, and I decided to collaborate on a book that became An Unfinished Canvas.

Some might say that a True Crime story practically writes itself because you don’t have to create characters or situations. Yes, the facts and the real people already exist (and I won’t even begin to talk about all the research required) but the telling of the story is the key to a good True Crime. I will just mention one book I came across where more than fifty pages are taken up with actual trial transcripts, and, no, I’m not offering that one as a model. Sometimes I imagine how a passage I’m developing would play out on one of the TV crime shows, like 48 Hours Mystery. A good scene is cinematic, and in True Crime, you can always use that “voiceover” (“In the neighborhood, life would never be normal again.”)

A word about getting True Crime published: Mike Glasgow and I sent queries to three agents regarding the March case and received favorable replies. One agent asked for a book proposal. We worked hard on it and submitted. Then we waited. You know about the waiting.

It happened that 48 Hours Mystery was airing an episode about the March case. Sharlene Martin of Martin Literary Management in Los Angeles saw the show. I can imagine her asking herself, “Don’t I have a book proposal about that case? I know it’s here, somewhere!” and rummaging through stacks of proposals. She called the next day and said, “I’d like to represent you.”

Mike and I didn’t know we had a True Crime story. We just knew that we had a compelling story about real people and a real crime. That was five years ago. Since then, I’ve been immersed in this genre. It has been intense, sometimes sad, and always tedious, making sure we get it right.

For the next few months I’ll be working on that mystery in Provence.

Thanks to Bente Gallagher/Jennie Bentley for inviting me to visit Working Stiffs.I appreciate the invitation to blog with all of you crime writers. After all, we are kind of like cousins, part of the same family.

The release date for A Season of Darkness is December 7. Phyllis Gobbell and Doug Jones will be launching their book at Borders/West End in Nashville on December 8 at 7:00.
Posted by Working Stiffs at 1:22 AM

Thanks for visiting with us, Phyllis! Can't wait to read A Season of Darkness. Such a compelling story!

Very interesting. Welcome to the Stiffs!

I should probably read more true crime, because I'm always fascinated by what I do read, especially open cases like the Boy in the Box, that I wrote about on this blog a few years ago.

Phyllis, as someone married to a journalist, I can testify that nothing a fiction writer creates is as compelling as the real thing. Marcia Trimble's story deserved to be told and I look forward to reading your book.

This conference you mention--was that the Oxford Creative Nonfiction Writers Conference, in mid-November? If so, I would love to hear your impressions.

I don't read much true crime. I guess I prefer to live in a fantasy world, at least where things like the rape and murder of children are concerned.

To Ramona - Yes, we might be cousins! I have cousins in Texas.

The Oxford conference was wonderful! Lee Gutkind was the featured speaker (well, there were several features speakers)and, of course, he's the "father" of the genre, so to speak. We had the opportunity to pitch our work with agents and editors of books and magazines. We had a number of gatherings where we could meet informally with Lee and others. At some conferences, you feel you aren't important enough to talk to the "special" people, but all the featured speakers were generous with their time and just plain fun!