I originally posted this on my blog on the Fifth anniversary of the event that changed many lives. I thought it was appropriate to post it again.

I was only six when President Kennedy was killed. I remember the nuns at school crying and sending us home early. I remember the television being on constantly and playing "funeral" with my younger sister and my cousins, using our toy box as a coffin. Being so young, it didn't make a great impression on me.

September 11, 2001 was different. In many ways, this event was more horrific than both Pearl Harbor and the Kennedy assassination. We were attacked on our own soil. It wasn't a military attack. It was a cowardly attack on innocent civilians.

I was at work entering police reports into the computer. The phone rang and when I answered it, the wife of one of the police officers told me to turn on the television, that a plane had flown into the World Trade Center. In the squad room, the TV was already on, and we watched the events unfold. At the time, most of us thought that it was an accident--that a plane had malfunctioned somehow and hit the tower. No one even considered that it might be deliberate, until we watched a second plane hit the other tower, then the Pentagon and Shanksville. 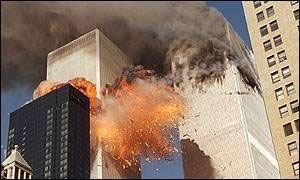 I don't remember what I thought at the time, other than that things would never be the same. Even in our suburban police department, we took extensive precautions. We locked down the building, installing a temporary phone outside for visitors to call to gain entry to the building. We remained in this lock-down mode for days. Keys to the police cars had always been left in the cars--after all, who would steal a car from a police parking lot? Not any more. We had to worry about terrorists taking the cars and using them as bombs. Even now, the keys are kept in a lock box inside the station.

There were numerous other precautions taken, investigations done, and assistance given by our department to federal agencies involved in preventing more attacks. Before 9/11, our police department had only been concerned about DUIs, drugs, domestics, and traffic violators.
That all changed in one day.

After five years, though, complacency has returned. No one thinks about the attacks anymore. I know it's not good to dwell on the tragedy, but we shouldn't forget. For a time, people changed. They cared about each other. They went out of their way to help others. If anything good came out of 9/11, it was that. Maybe with this fifth anniversary, people will not only remember the tragedy, but remember how we all felt afterward. How we were better people for helping our fellow man.

Email ThisBlogThis!Share to TwitterShare to FacebookShare to Pinterest
Labels: 9/11

Not expecting a weekend post, I didn't see this until this morning.

On 9-11 I was on the Parkway West, heading for downtown Pittsburgh. I was employed by Duquesne Light Company at the time, and our corporate offices were out at Cherrington Center in Moon Township, right beside the Pittsburgh Airport.

I was on my way to a hearing before a Public Utility Commission judge in the State Office Building when the news of the first plane hitting the tower came on the car radio. I was listening to Howard Stern, so when the second plane was announced I changed the station to see whether or not this was really happening. It was. Every station had the same story. I tried to call my office but nobody answered. I found out later that they had evacuated because of the proximity to the airport.

By then I was downtown and went up to the 11th floor for the hearing, but, as things were getting started, we heard odd noises - the sound of hundreds of feet walking in the stairwell. That's when a guard stuck his head into the courtroom and announced that the building was being evacuated because another plane had turned back over Ohio and was heading our way.

We joined the walkers in the stairwell and left the building.