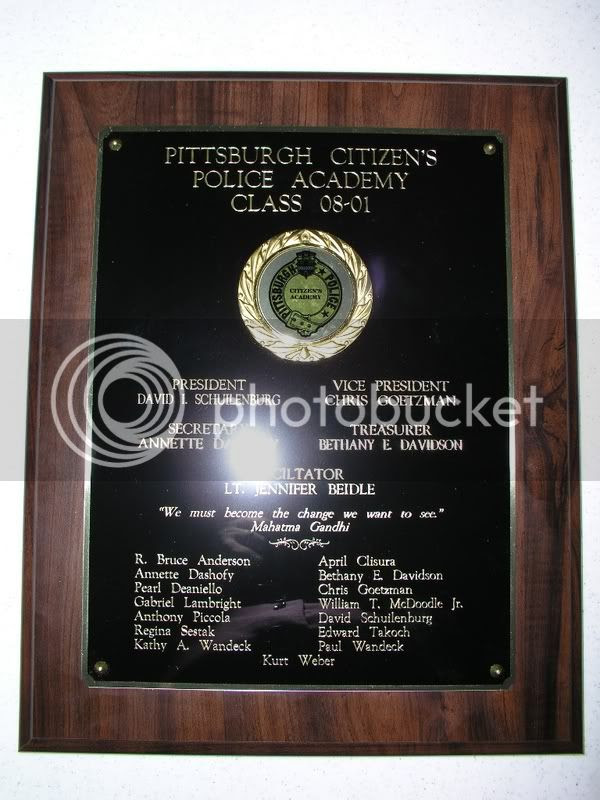 The ceremony was quite nice. Not the pomp and circumstance of some graduations, which is a good thing. We were allowed to bring guests, so my hubby tagged along. (He heard there would be food). Others brought spouses, significant others, children, or siblings. Some of us wore our “official” CPA shirts, others dressed up a bit.

The ceremony opened with speeches from several of the police bureau’s finest, including Chief Nate Harper. 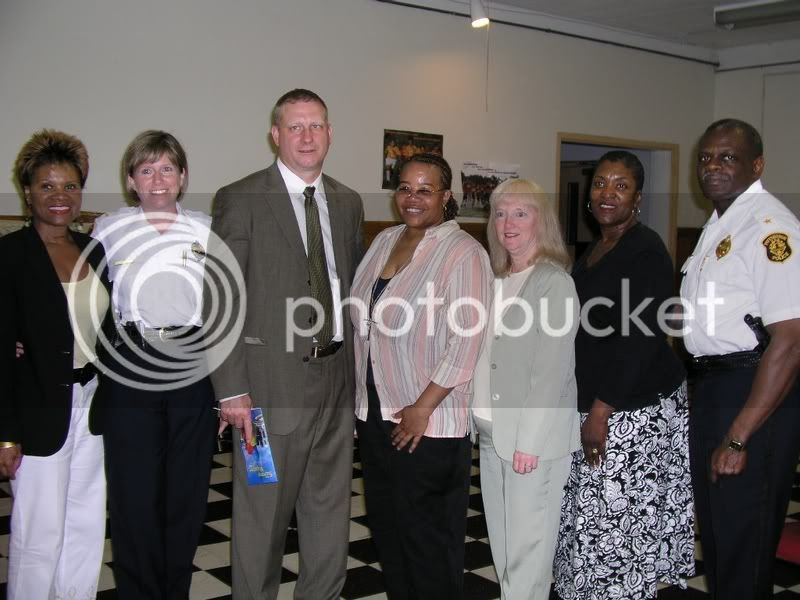 Our class had a plaque made and we presented it to the chief.

Then, we received our certificates of completion, suitable for framing.

All that was left was to dig into the food and socialize one last time.

None of us wanted to think about that last part. When the next class begins in September, we have an opportunity to take those weeks we missed, so we were comparing which weeks we might encounter one another again during a make-up. Heck, I think I may just drop in on occasion to ask some questions that I didn’t think of until AFTER a class.

I want to take this opportunity to thank everyone involved in Pittsburgh Bureau of Police Citizens’ Academy ESPECIALLY Lieutenant Jennifer Beidle who has put together an incredible curriculum. I’ve said it before, I’ll say it one more time…if you have a chance to participate in a CPA, grab it.

On the way home, my hubby expressed amazement at the sincere interest the chief showed in our class. I reminded him of what Chief Harper had said in his speech. The police department doesn’t have money to buy advertising. That’s what we are. He wants us to go out into the community and drum up support for the officers who work such a dangerous job every day and who must make life altering decisions in a split second. What you see on TV, be it crime fiction or on the news, is NOT the whole story. We’ve been given the opportunity to see what they face, maybe not from the inside, but from a front row seat. We now have a better idea of the things they face and the obstacles they must endure.

I’ll also miss the classes, my classmates, and Lieutenant Beidle.

But as Chief Harper pointed out, we still have our ride-alongs to do, so it isn’t over yet! 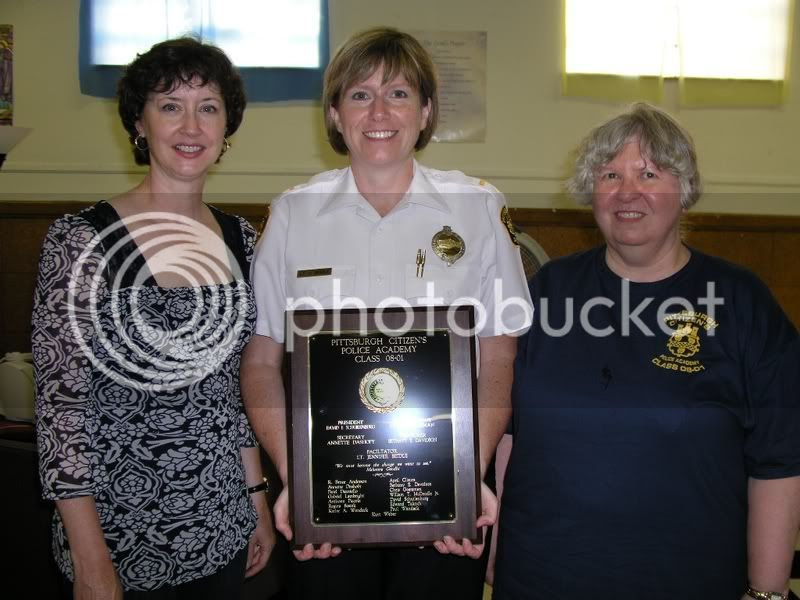 Congratulations, Annette! Where will you hang your diploma?

We alse received a certificate for completing the CAT Eyes course (Community Anti Terrorism Training), I plan on hanging both in my office.

Congratulations, Annette and Gina! And thanks for the reports every week!

BTW, last night was our Chapter's SinC night at the firing range. I didn't want to blow through a lot of ammo that quickly, so I didn't use the MP5, BUT, I did fire a S&W .50 caliber revolver. What a friggin' rush.

Since I have already gone through safety training I was on the range while the rest of the group was in the classroom. When they came out, they wanted to know who fired the cannon. I showed them the shell casing. An entire 9 mm round fits easily in the casing.

And I swear handguns are LOUDER than a cannon. Especially a 50 cal. What a monster!

Gina and I were the only writers. Our class president works at the EOC (Emergency Operations Center). There were several folks there who were involved in neighborhood watch type programs or who were simply concerned about the rising crime rates in their communities. We had at least one young future police officer...going through regular police academy at the same time and very gungho. And we had a spouse or two of CPA alumni who had heard about all the fun and wanted to see for themselves.

All in all, quite a mix.

Ah, Annette, I got choked up just thinking about you and Gina graduating. Your big girls now! My plaque is to the right of my desk. I hope it brings you years of inspiration to your writing! And I expect full blogs about your ride alongs. You're in for a treat. Ask to go on holidays... especially New Years! Hint... Hint

Congratulations on your graduation! May the information inspire several series of novels for you.