Noble Lies and the Perfect Martini

The Working Stiffs are delighted to host author Charles Benoit today. An insatiable traveler and occasional scuba diver, Charles continues his worldwide quest to find the perfect martini. Noble Lies is his third novel, following the Edgar-nominated Relative Danger and Out of Order.

First, thanks for inviting me over for the day. I’m a big fan of visiting new and exotic destinations and this blog site definitely qualifies.

My wife and I are busy making plans for our summer vacation. Well, that’s not accurate. She’s making the plans. In our family, Rose worries about the small details, like booking flights, paying bills, managing our investments and keeping the house maintained and standing. I worry about the big stuff. For example, did you know the sun will go into a Red Dwarf stage in less than 6 billion years? Is anyone doing anything about this?

Anyway, our trip—we’re off to Belize and I’m excited for a lot of reasons. We’ve never been to Central America (although we did live in Trinidad for a year and did a lot of island hopping), the scuba diving is legendary and there’ll be no Internet connections so that means no email or work or news updates to disturb us. But most exciting of all, Belize is the setting of Donald Westlake’s High Adventure.

Most people know Westlake as the author of the Dortmunder series. A smaller, more hard-boiled crowd knows he’s also the man behind the Parker books. The smallest crowd of all knows that he’s also the man behind a pair of outstanding adventure novels – Kahawa, set in Uganda, and High Adventure, set in Belize. It’s no exaggeration to say that these two books changed my life. Before I read them I hadn’t traveled outside of North America and the only fiction I had written were glowing comments on students’ report cards. These books changed everything for me. After I read them, I knew I had to get overseas and, for the first time in my life, I wanted to write. Not just any book, as if that weren’t enough. No, I had to write the kind of book I had read, a book with dashing (if at times floundering) heroes, exotic locations, beautiful, sultry, quick-witted women, and dangerous villains. I knew I wanted to write an adventure. But then I thought, shouldn’t you have one first?

So Rose and I set off to see the world, me in search of that adventure, her in search of the best poolside bar and Pad Thai Chicken. What I found is that the world I thought (hoped? dreamed?) existed wasn’t really there anymore. There were no tramp steamers pulling up to steamy ports, unloading cases of bootleg whiskey by moonlight as jungle monkeys chattered, and half-dressed vixens went shot for shot at the bar with square-jawed leading men in sweat-stained fedoras, while in the background Dooly Wilson’s grandkids played gin-soaked jazz on tinny pianos. And if there were, they weren’t on the tourist maps.

But the world I found was just as exotic, only in a different, semi-sanitized way. Sure, I didn’t meet any rum-running, cheroot-smoking drifters with a tale to tell about a wrinkled map and a lost treasure, but I did find salaried office workers in Jaipur who knew how to keep a 1974 Xerox copier working using parts they’d salvaged from a wrecked 2001 Tata sedan. I met shop owners in Bali who could get their hands on DVDs of movies that were still in production. I had drinks with an Egyptian crossword puzzle fanatic and Gene Autry fan in a “Hard Rick Café” in Syria the night before Ramadan started. And I watched the sun set in Grenada with a group of busboys dressed as pirates, overlooking a bay that once saw the skull and crossbones of Captain Morgan’s fleet. My world was different from the one Westlake wrote about, but I found my adventure. And I put it in my books.

I was introduced to Donald Westlake at the Edgar’s Award Banquet the year Relative Danger was nominated for Best First. I meant to tell him how much his books inspired me, how his writing changed the way I saw the world and shaped the way I told a story. What I ended up saying was, “er, uh…um…gosh…er, you’re…a…uh…”

I hope he understood. 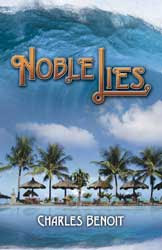 Posted by Working Stiffs at 6:20 AM

Charles, welcome to the working stiffs! Once again I stayed up way too late last night trying to finish Noble Lies; I'm on page 217 of 247 but I put it down because it's too good to hurry.

I know it's a never ending quest, but where's the best martini you've had so far?

Great post, Charles! I'm kind of disappointed though, that I don't think I can count my vacation to Busch Gardens as exotic.

Welcome, Charles! I'm so envious of you for your travels. I've been to Hawaii several times, but that's about as far East as I've made it. I want to explore Asia!

Thanks for keeping my wanderlust alive.

Welcome, Charles. I'm envious beyond belief. I get excited when I make it to Lake Erie. And Colonial Williamsburg, like Busch Gardens, doesn't quite fit into the exotic mold.

Heck, I'm eagerly anticipating a day trip to Ohiopyle tomorrow. But it's supposed to rain...

Maybe I should take one of your books along, just in case.

Best martini so far - The bar at Hotel 42 in Boise, Idaho. Really. Created by mixologist Pat Carden, it's called the Ten Minute Martini and it is about as close to paradise as I'm gonna get.

In Belize, check out the zoo. It's as if the animals are really still in the jungle. The guides like to point out that "if he wanted to, he could get out of there, but he knows we'll feed him. I think he's wondering how you would taste." The animals were mellow, but take majoy-league mosquito repellant! My bottle was almost empty, and I kept passing it to people, who would use it and give it back, a bit like the loaves and fishes, because we all needed the protection.