A Heck Of A Year

Well I was originally planning on covering a different topic, but, since this is likely my last blog at the Working Stiffs this year, there are some things I need to get off of my chest. I want to make it clear that this isn’t a pity blog. Actually, as I’m writing this I’m in a better frame of mind than I have been for most of this crazy year.

First off, I’d be remiss if I failed to wish all of our readers a very Merry Christmas and more importantly a fabulous and prosperous New Year.

I was talking to my beautiful wife the other day and we were discussing the wild swings of 2008; the huge ups and downs, highs and lows.

The year started with high anticipation of a glorious and exciting year. I had signed my publishing contract for my very first book, my oldest daughter was set to graduate from her Master’s Program in Speech Language Pathology and we were planning a cruise to the Caribbean or trip to my favorite spot on earth; Hawaii.

As quickly as the year began, the frustration started. Proofs for my book did not show up, my daughter worried about passing the school’s boards and finishing her thesis project and I was having some health issues very similar to our own dear reader and my friend, Lee Lofland.

In February I went to China. I didn't know then that it would likely be the last time. I had the privilege of visiting one of the most fantastic sights of my life, the Harbin Ice Festival. 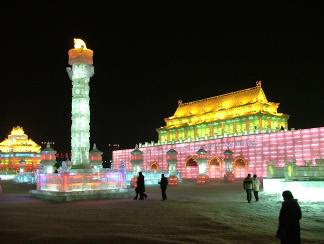 Then I wound up getting stuck in the widely reported ice storms that hit China on the biggest travel day of the year, the Chinese New Year. Now getting stuck in Beijing ain't so bad, but it did forshadow the times to come.

Time pushed on and things got more frustrating. The revised ETA for my proofs came and went (several times), my daughter’s thesis was derailed by severe icy weather forcing her to delay her study cases at the facility that was 50 miles away and rumors of a takeover of Anheuser-Busch (the company I worked for) started surfacing.

Finally, my proofs showed up, my daughter enrolled in a summer program to finish things up and the rumors of the takeover slowed. Our vacation turned from exotic to ordinary when the cruise ship to the Southern Caribbean turned into a condo at Gulf Shores to be shared with our dear friends. I will tell you that as nice as Gulf Shores is, Alabama will never be mistaken for St. Thomas or Maui and a third floor condo does not float in such a way as to be confused with a Carnival Ship. At least there was no fear of getting sea sick. Oh, the caveat of the deal was that it landed me a 52” Mitsubishi LCD flat panel TV, a new Denon AV Receiver, two new Klipsch speakers, a Blu-ray Player, and all the rest. As my wife pointed out, I’ll have the TV long after my memories of a cruise would fade.

Several days before we left for vacation two things happened. I received my first box of books and my best friend, Fraiser had what I classified as a stroke. Fraiser was our 13 year-old Soft-Coated Wheaton Terrier. We rushed him to the vet and after a cold bath and some oxygen, he was given a clean bill of health. It was summed up as being overheated in the July heat. Deep down inside, I knew there was more to it than that. This was an omen for the year; an extreme high (holding my book in my hand for the first time) and low (my buddy suffering) in the very same day.

We made arrangements to have my wife’s sister watch him, but something inside told me that he was not long for this earth. I told all my daughters to say their goodbyes before we left, which they did, but not believing me. 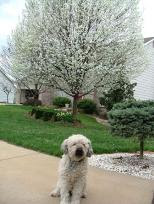 We left on the 4th of July. The next morning we received word that he died in his sleep; leaving a cloud hanging over the vacation. We still have an empty place in our hearts and in our home.

Later that month, another proud moment. My daughter graduated and was offered a great paying job. Beyond being the extremely proud Dad, I knew that she was off the payroll and that new car I needed was looking like a reality. Well '08 struck again. The day my daughter received her first paycheck, her '99 Saturn's engine blew. I had planned on giving that one to my 16 year old daughter. Oh well.

Then came my launch party. A proud and exciting day. However, in 2008 fashion, earlier that same day Inbev announced their intention of buying Anheuser-Busch, the company that I had proudly worked at for 17 years.

So, I think you’re getting the gist of my year. Recently, I got my first review (two weeks ago). I was elated. Two weeks later (last Friday) and I’m a victim of Inbev’s cost cutting. Now, A-B did a nice, respectful job at cutting the workforce. I won’t go into details, but I have to say that it could have been much worse. No security watching us pack up, escorting us off the property. Computer accounts were still active to allow us to send farewell e-mails. They brought us to private offices staggered throughout the day to avoid passing your friends in the hallway.

In all, prior to the cost cutting, there were 24 people in the Corporate Environmental, Health and Safety Departments of A-B. There are now 4. I feel as bad for those remaining as those of us that were let go. I think their stress level will be at a higher level than mine.

The really sad part of losing my job is losing contact with the people I've grown to love. There are many people in China that I have connected with in a way that I would never have imagined. It hurts that I know that I will lose contact with them. It's a matter of distance and time. There are consultant friends I won't see and my co-workers that I've grown to respect.

In the meantime, I’ve become a full-time writer and plan to make the most of it. My work in progress will get finished and my next project will take shape. I’ll make contacts to find a new job and life will continue. Yeah, the economy still sucks and I feel much more fortunate than many others who haven’t been as blessed as I have been. I have a family that loves me, friends that care and with the Obama Administration, a career that should bounce back quickly.

In the meantime, if you know of somebody looking for a good Environmental Engineer that can write a mean report, pass on the word that I’m available.

Merry Christmas all, and all my hope that 2009 will hold plenty of promise for all of us.

What a great post, Wilfrid. You've most certainly had your share of ups and downs this year.

Wil -
There is life after layoff. Honest. In 2007, I was downsized out of the job I'd held for more than 18 years. I got a new job in which I'm only working 3 days a week (time to write) and, between the salary and my partial pension from the old job, am actually making more money than I was before. Of course, nothing can replace getting to go to China . . . In my job I felt lucky when I got to go to neighboring counties.

Phew, what a year you've had. Wishing you a 2009 with more ups than downs.

And your tree is beautiful!

I think 2008 has been quite a year for all of us! But most especially for you, it sounds like.

Good luck on the next chapter (not just in your book.)

Will, I'm sure 2009 will be better! Everything happens for a reason. We don't always like it, but usually there's something much better down the road. I go by the "when one door closes, another opens" philosophy.

Btw, your tree would be much better if it was a Pittsburgh Penguins tree.

Kristine Thank you very much.

Gina & Tory, I'm looking forward to that next chapter in my life. Looking back, it will be kind of nice wiping the slate clean and starting over.

Annette & Joyce, That is only one of 3 trees in the house. We won it in a raffle the year the Blues won the President's Trophy for best record in the NHL. The Blues are having my kind of 2008.

Meanwhile, today I'm on a paid extended vacation. You see, I'm still technically employed. It seems that the WARN Act requires companies to give 60 day notice prior to big layoffs.

I think ups and downs are the world's way of keeping us both hopeful and humble.

A sluggish economy is no match for your attitude and experience. Dig in on the book during your hiatus, because I suspect you'll be on another St. Louis company payroll in early 2009.

Wil, since you are familiar with the Chinese way of life, you may also be familiar with their horoscope. This has been the Year of the Rat, who is a sneaky bastard, giving and taking away, indiscriminately. You can find out more here:

A Chinese friend warned us about this last January. I hate to admit how right she was.

Awww... Freddy, my love, I figured you knew what you were talking about last week, but I was hoping it wasn't so. This totally sucks! Sounds like you've got a great attitude, though. Enjoy your time 'off', writing, because as Joe says, you'll get another job before you know it. And if you want some extra pocket money in the meantime, you could always go back to stripping, you know! ;-)

InBev's loss will be another company's gain. You've handled your crazy year with dignity and grace--a true sign of a good and decent man.

2009 is the year of the Ox, but I don't know what that means, financially, at least.

Actually Karen I pay pretty close attention to the Chinese Zodiac. 2007 Year of the pig was a prosperous year.

Jennie, I've turned that page on my life. No more stripping for me.

Thank you Laura. That is a nice compliment. Hope the weather is okay for tomorrow.

SO I spent my first day of freedom making a huge home made meal. Turkey, dressing, mashed potatoes, fresh green beans. It's the Thanksgiving dinner I didn't make on Thanksgiving.