A Conviction in the Baby Grace Murder

Last year I wrote a post about Baby Grace, the child whose body was found in a plastic container on an island in Galveston Bay. Below is the follow-up post I wrote when her body was identified. I decided to re-post it because on February 2, 2009, Riley Ann Sawyer's mother was convicted of her torture and murder. Rest in peace now, little angel. 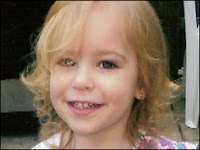 Baby Grace now has a name: Riley Ann Sawyers. Riley's mother and her new husband were arrested over the weekend and have admitted to torturing and killing her on July 24th. They beat her with leather belts, held her head under water in the bathtub, then threw her across the room, slamming her head onto a tile floor. (Read Affidavit of Probable Cause.)

After her death, the mother, Kimberly Ann Trenor, and her husband, Royce Clyde Zeigler, went to Wal-Mart and purchased the blue plastic container, along with other items used to hide and dispose of Riley's body. They hid her in a shed on the property for two months, then dumped her off the Galveston Causeway.

Investigators were led to the couple after they received a phone call from Riley's paternal grandmother in Ohio, Sheryl Sawyers. Her son Robert, and Trenor were childhood sweethearts and lived with Sheryl Sawyers until Trenor moved to Texas to be with Zeigler, whom she met on a gaming site on the internet. After Riley's murder, Trenor had told everyone that Riley had been taken away by child services and she was never reported missing.

At this point, Trenor and Zeigler have been charged with injuring a child and tampering with evidence. According to legal analyst, Brian Wice, this might be a strategic move on the part of the Galveston County District Attorney's Office. As more evidence is uncovered, the charge could eventually be upgraded to capital murder.

I'm so glad there was a conviction.

While this was a truly disturbing story, what is even more disturbing is that these horrific child murders seem to happen more and more often these days. Caylee Anthony being the latest one to get national news coverage. It's just terribly sad.

I don't understand how anyone could hurt a child. Anyone who does that is truly a monster and should be treated as such.

The worst thing about Riley's and Caylee's murders is that they were killed by their mothers. Most mothers would die themselves before they let anyone hurt their babies.

Annette -
I'm not convinced that there are more child murders nowadays -- maybe it's just that more are noticed because we keep better track of people, and modern forensics can differentiate accidental death from homicide. Certainly there was a high death rate among children a hundred years ago. Who is to say how many of those deaths were due to natural causes?
- Gina

Interesting point, Gina. And a hundred years ago, women and children were still considered "property" which meant that there was little investigation into their deaths.

The detail of this abuse is mortifying.

Actually Gina, there were probably more. Beating your children was fairly normal thing to do. I was watching an old 1940s cop movie a while ago, and the handsome young detective went home to his beautiful wife and she told him that their young son had crossed a busy street by himself, and she told her husband to go up and whip him. Common terms, 'you're going to get a beating for that' and 'if you don't stop that, I'll beat the h--l out of you'.
Patg