Finding Someone Weirder Than Us

When I go to mystery conventions, I have noticed that the mystery fans and writers are frequently the weirdest people in the hotel. Usually we’re paired at a conference center with some incredibly normal group like dental hygienists, real estate agents or insurance salesman.

I don’t say this to disparage mystery writers or fans at all (since I have been one myself for years), but people get a funny look in their eye when they step into the elevator with us all wearing our “I see dead people” pins or badges that read “love is murder” and discussing if we’re going to the poison panel or to the crime scene talk next. I know what’s going through their heads. They’re thinking: watch out, these people are dangerous.

So last weekend at Love is Murder in Chicago (a wonderful small conference where I went to introduce my debut novel Posed for Murder), we were delighted to find people much weirder and more obsessed then we were: reencactors. 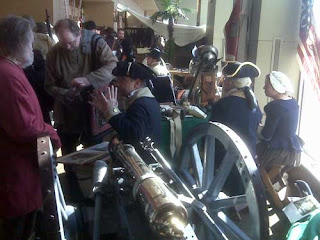 I kept calling them reincarnationists by mistake, and perhaps some of them were that, too. All weekend long, women in hoopskirts, knights in armor, men dressed as WWI soldiers, jaunty WWII sailors, Roman soldiers, Colonial troupes and Civil War soldiers wondered through the lobby. They made me feel… well, normal. 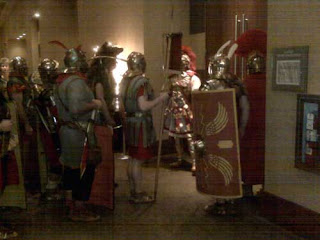 I talked to a WWI pilot for a while, who was interesting and charming (despite his total and perhaps unhealthy obsession with WWI). He told me that the joke they tell is that a real reenactor has $3,000 invested in gear and they drive a $300 car. Sounds like a mystery fan, except the $3,000 is invested in books.

So in the end the reenactors didn’t seem so strange or different from us. If they spent some time talking with us, too, they would have discovered that mystery writers and fans are some of the nicest people anyone could ever meet. We get all our violence and hate out on the page. And there’s nothing we love more than a good book… and a good party.

Meredith Cole directed feature films and wrote screenplays before writing mysteries. She won the St. Martin’s/Malice Domestic Best First Traditional Mystery competition in 2007. Her book POSED FOR MURDER, will be published by St. Martin’s Minotaur February 17, 2009. She blogs at http://www.thedebutanteball.com/
Posted by Working Stiffs at 4:51 AM

I had such a good time at Bouchercon, that if I had the money, I'd probably go to all the mystery conferences and conventions. But then, I'd never get any writing done and I'd end up an alcoholic. I'll settle for one or two a year.

History geek that I am, I would have liked hanging out with all those reenactors!

Welcome, Meredith. I enjoyed meeting you at Bouchercon at the Guppies lunch. I can't wait to pick up your book.

My hubby builds, sells, and shoots muzzleloaders and does some French and Indian War reenacting, so I'm extremely familiar with all the trappings. I have a trunkful of my own 18th century petticoats, chemises, bed jackets, and stays. It will definitely suck you in. And suck your wallet dry.

So in my household, we have both a mystery writer and a reenactor. How weird does that make us???

Welcome Meredith. I think every group has some extreme personalities. I remember my first "Literary Party" I attended with my wife. Most were not Genre Fiction writers, but poets, literary authors and the like. I remember my wife saying, "If you end up being like these people, I'll leave you."

She was joking of course, but she made her point. Funny thing is, I find Mystery/Suspense and Thriller writers to seem the most normal of us.

Yeah, Joyce, I loved Bouchercon and really wanted to attend LIM, but money doesn't grow on trees. Oh and you have a point of becoming an alcoholic. Some of us Mystery writers do like to hang out in the bar.

By the way, I'm celebrating my first true day of unemployment today. I am officially OFF the A-B payroll.

Hey, Will, congratulations and cyberhugs on the "official" thing. We NEED a conference and a conference bar right now to drink a toast to better times ahead.

I just love weird people--they're so much fun to talk to. And I nearly talked myself hoarse at Love is Murder. It's too bad it won't be happening next year, but I recommend it highly for 2011. Maybe we'll even overlap with the reenactors again!

Left Coast Crime, March 7-12, 2009, this year is billed as the Unconventional Convention. Panels, interviews, Writers' workshops on the Beach and under the Palms. Now that's a very different mystery convention. I can't wait.http://www.leftcoastcrime.org/2009.

Thanks, Meredith, for your delightful description of the convention. The other group was certainly different.

What a perfect combo of conferences! I don't think I've ever witnessed "reenactors" before--lots of actors, but no reenactors. Fascinating.

"I don’t say this to disparage mystery writers or fans"

Based on what you wrote before that, I thought you were disparaging the dental hygienists and real estate agents. Silly me.

I find mystery conventions quite tame. I rarely see anyone decked out with a lot of badges or odd costumes. I'm really sorry to have missed Love Is Murder, it is one I really wanted to attend, however the weather always deters me. I would have enjoyed seeing the reenactors again.
Weirder than us! SF conventions are where you find people really decked out in badges, pins, partcial to full costumes and willing to discuss any farfetched idea at the drop of an eye glance. As for going to one or two conventions a year, well that too is 'barely' traveling. There's the local, the coastal, the regional, the national and the world.
Mystery conventions have a ways to go to catch up. I mean, really, they don't even have a conference on how to run a convention. Most Mystery conventions don't have out of towners coming to town to help run them. That's a worry.
Patg

Dana--I certainly don't mean to disparage dentists or real estate agents (I know some very nice ones myself!)--I just think it's funny how freaked out people get by the other organization sharing their conference space. It reminds me of when I lived in DC and two completely different groups would share the Federal Mall for their individual celebrations (Hells Angels and AIDS Quilt, for example). I'm sure if people all talked they would find they had way more in common than they thought!

Pat--I'll be the SF conventions are great! I used to watch Star Trek Next Generation religiously, and the costumes are so cool. I can't imagine dressing as a klingon though--too much make-up!

Reenactors are great for historical research. They know more about their subject than anyone else on the planet, and what's more, they can actually describe what it feels like to stand on the deserted knoll holding the gun in trembling hands, watching the horde of 'enemies' come closer, because they've been there and seen it. I don't write historicals - yet, although one is percolating in the back-brain - but that kind of personal experience is invaluable.

Congratulations on your book, Meredith!
I laughed out loud at this post. In fact, my husband and I have done Civil War reenacting for years - so I think that would make me the weirdest person at either convention last weekend! (Although I don't know about those Trojan soldiers...) I wore only professional clothes to Love is Murder, don't worry. The hoops stayed home.
It was oddly disorienting to shift realities back and forth all weekend!
I look forward to seeing you in 2011 at LIM.

You haven't lived until you've share a hotel with the Furries. Gulp!