Hi Everyone. Thanks for having me. And thanks so much to Annette for giving me a chance to drop by and say hello!

Last week, I wrote to a few dozen college professors asking for their help in spreading the word to their graduating seniors about Craft and Career, our upcoming Pennwriters conference.

My first point was that by the time you add up the 45+ hour long workshops, agent pitch sessions, and critique sessions, what you get is a New York writer’s conference at a Pittsburgh price. It was an easy case to make, one that could be proven with simple math and a comparison chart.

My second point was a bit more nebulous, and I’m not sure I pulled it off. What I wanted to say was that in addition to putting on a great conference at a great price, we also do something that is a bit harder to quantify.

In business letter-ese it came out this way: “At a Pennwriters conference, beginning writers comfortably mingle with best-selling authors. The atmosphere is warm, welcoming, and encouraging. In short, it’s the perfect environment for an aspiring writer to learn how to network with industry professionals.”

Which basically translates to: “Fear not, young writer. If you show up, we’ll be nice to you.”

It’s a point that I suspect may seem like an insignificant one to a student used to the artificially supportive cocoon that is college.

And this makes me wish that I could have figured out how to work in a paragraph or two about some of the conferences I’ve gone to that were anything but welcoming.

Once, at a really famous conference best left unnamed, I stood in the atrium and watched in disbelief as a team of hotel employees used saw horses to erect a barrier designed to keep us--the hundreds of paying attendees, away from them—the agents and editors who were having a private schmooze-fest, complete with complimentary cocktails and free hors d’oeuvres, on the other side of the very same room.

The schlumpy body language on our side of the atrium, where there were exactly zero drinks and snacks, said it all. A girl who looked like she was in her early twenties said, “It would be different if they were also going to have a party that included all of us.” The segregation continued for the entire weekend. If you wanted to interact one-on-one with a publishing pro, you signed up for it. And you paid extra. Beyond that, the step aside peon message came through loud and clear. I happened to be riding in an elevator with a writer I greatly admired. And I told him so. He did a little chin jerk which I guess meant thank you. And then he looked away. I could go on, but I think you get the point.

The truth is that what took place at that New York conference reflects the real world of writing and publishing, where, at least for now, there are still gates, and gatekeepers. In the real world, the Us vs. Them mentality happens every day. Not everywhere of course and not all of the time. But how else do you explain the glee some writers are expressing now that it looks like the digital revolution may dislodge a few gate keepers from their towers?

Maybe the Schadenfreude comes from writers who think they have been treated like peons for too long. Or maybe being thin-skinned is just part and parcel of being a writer. I don’t know about any of that.

What I do know is that the Us vs. Them thing doesn’t happen at a Pennwriters conference.

I’m not sure why this is true. And frankly, I can’t even prove it. Except to say that two years ago I went to my first conference and after three days I knew that I was going to be a member for life. 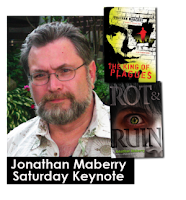 It started at the Friday night keynote dinner. I got there late, and didn’t see any familiar faces. So I sat next to the friendliest looking person I could find, a guy wearing a loud shirt and a kind smile. He turned out to be Jonathan Maberry. And for the next hour he treated me, and everyone else at the table, as though we were old friends. We talked about writing in picayune detail. It was wonderful.

That same inclusive spirit seemed to be present in every workshop and at every meal. And for me at least, it’s a feeling that has carried on to this day. It’s there at our monthly area meetings, and on our free-wheeling, always interesting Yahoo discussion loop. We are writers who enjoy the company of other writers.

I’ve heard other people use the word family to describe our organization, so I’ll use it too as I offer up this friendly reminder:

This year’s family reunion will be in Pittsburgh at the Airport Marriott on May 13-15. Hope to see you there.

And PS--if you happen to notice any freshly-minted college grads wandering around, I know you’ll make them feel right at home.


About Mercedes O’Connor Goldcamp. Before taking time off to raise her children, Mercedes worked as an advertising copywriter and free-lance reporter. She’s currently serving as the Publicity Chairperson for the 2011 conference. She’s also writing a middle-grade mystery novel.
Posted by Working Stiffs at 4:14 AM

Welcome Mercedes! Enjoyed the post and the conference sounds wonderful. Last year I was co-chair of the New England Crime Bake for Mystery Writers and Readers and we always spend time disucssing whether we can make that writer-friendly conference feel open and welcoming, as well. It makes a huge difference, as you know, in the experience for ALL the attendees!

Whoops... I meant to say MORE open and welcome... as we have a great reputation in that area. (Sorry, I need more coffee this morning!)

I don't have anything to compare the PW conference to (other than Bouchercon, which is one big party), but I agree that it's a great conference. I can't wait.

I'll add that one of the best ways to meet the agents and editors is to volunteer to be a Penn Pal or moderate one of the panels. I'm doing both.

Welcome to Working Stiffs, Mercedes. You, Meredith, and Julie are all doing a fantastic job and I can't wait for the conference.

You are so right about this thing being a family reunion of sorts. I say "of sorts" because I think we're even more open to new family members than most REAL family reunions! ;-)

Pennwriters is very welcoming. By the end of the three days, you do feel like you've added new members to your family.

I see you are writing a mystery for young readers. Good for you! One of my favorite genres.

Okay, now I'm going to the registration page and trying to figure out how much an airplane ticket will be.

Pat--I would love to hear about some of the ideas you came up with. You are right, it does make all the difference.

Joyce--I have always wanted to go to Bouchercon...one of these days! Glad you are helping out at this year's conference. It's going to be a great one.

Annette--very true about the REAL family reunions... DNA is the stuff that makes you part of the gang.

But I've heard so many writers say that they feel as though the urge to put words on the page is part of their DNA too. Maybe in that sense we really are family.

Ramona--Thanks for stopping by. I have heard so much about you (all good) and I cannot wait to meet you and to take your "Shaping Story Arcs" workshop.

I would also love to know more about your editorial services.

CL--Thanks for sharing your experience. I hesitated to write this post because I didn't want to sound like I was whining. However a conference where the writers are treated like lepers can really damage the old self confidence (which for most of us is in short supply to begin with.)

I hope you'll come to the conference. The line-up that Meredith and Julie have put together is just amazing.

Oops. Sorry about the double posting. Triple posting now. Had a problem. :-)

Bente, if you can make the conference but can't splurge on the hotel room, you can stay at my house. I'm commuting to the conference.

Mercedes, I was so pleased to be asked back. Pennwriters knows how to put on a conference.

Ramona, I guess it's a good thing that I'm not on Facebook, lol.

Well said and very true! I went to my fist Pennwriters conference last year and loved it. I can't wait to attend this year now that I am a little more familiar with how the whole thing works. There is definitely a family type atmosphere which is so refreshing!

Everyone--thanks again for having me.
See you at the conference!

Sorry I'm late getting back to this -- but this year at Crime Bake both the local chapters of SinC and MWA hosted smaller opening receptions at the same time so the attendees could move between them and not feel overwhelmed by a huge event and we offered a type of scavenger hunt bingo card with items like "find a SinC national board member" and "a writer from New Hampshire" which was a great icebreaker. Committee members were doorkeepers at meals to greet people and urged to appraoch all attendees. These are just two things we added thisyear at what is already a very friendly conference!

Great post, Mercedes. I've been going to PW conferences for 15 years and haven't missed one because of all the things you mentioned. It's a great place to find support, friends, information, and fun. This year's conference looks to be another wonderful one.

Pat--I really love your ice breaking
scavenger hunt idea. I would love to do something like that this year. Thanks for the suggestion.

Found your post via Pennwriters Tweet. I'm excited to hear that Pennwriters is a more welcoming conference for attendees. I'm looking forward to going. See ya next Wednesday in "Mindful Writers"

I had a great time last year as a new Pennwriters member and first-time PW Conference attendee. Pinkalicious author Elizabeth Kann was the luncheon keynote, and we had a nice little conversation in the hallway about how much my daughter loves her book. Dinner keynote James Rollins seemed very friendly and accessible. Jonathan Maberry attended the cocktail party and he stood around and talked with a group of us for hours, about writing and reading and all kinds of other interesting things. And it's great to talk to fellow writers and book lovers! There really is a sense of community. I'm looking forward to next month's conference :-)