November 11 is Veterans Day--known as Armistice Day or Remembrance Day in other countries. November 11 has been celebrated since 1918 to commemorate the Armistice that brought an end to the War to End All Wars.

If World War 1 had actually ended all wars, this year would be particularly significant. The last American World War 1 veteran died on February 27 of this year. His name was Frank Buckles. He was 105 years old. During World War 1, Frank Buckles served as an ambulance driver near the front lines in Europe. In his final years, he advocated for support of the National World War 1 Memorial in Washington, D.C.  He was buried at Arlington National Cemetery, although a few strings had to be pulled because he’d never fought in combat. On the day of Buckles' burial, President Obama ordered flags be flown at half-staff in Buckles’ honor.

If the War to End All Wars had ended all wars, there would be no more living veterans in the United States to honor this year. Veterans Day could be retired as a holiday. The war veteran could go the way of the dodo bird. Extinct. Alive only in art, stories, and oral history.

I would love to be writing today about the extinction of war veterans. Sadly, I can’t. Instead, I will write a little—just a little--about Dover Air Force Base.

I’ve never actually been on Dover AFB. I’ve seen it from the highway on my way to the beach downstate in Delaware. What I see of Dover AFB from the highway are tall fences, huge airplanes, and nondescript buildings.

I’ve been on the beach a few times when C-40s fly over on the way to Dover. Everyone stops frolicking in the waves or digging in the sand to stare up at  the giant planes, wondering if today they are carrying equipment, or supplies, of the bodies of war dead.

Dover AFB is the mortuary for soldiers killed abroad. Their remains are returned to U.S. soil at Dover, and only at Dover. It is impossible to live in Delaware and not be cognizant of this. The belief has always-always-been that the remains of our fallen soldiers were treated with the utmost respect. This week, that was proven to be wrong.

I won’t write much about the scandal unrolling except to report this. No one is rioting in Dover. No one is occupying the base. I’m not sure why. Do soldiers and their families not protest that way?

There was a moment in American history when a group of war veterans did just that. Ironically, the soldiers were veterans of World War 1. They went to Washington D.C. because, equally ironically, they could not find work in a terrible economy, and they wanted Congress’ help. They weren’t beggars, not any more than a veteran seeking government help would be called  a beggar today. 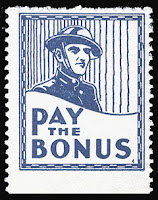 To simplify a complicated story, in 1924 Congress voted to award bonuses to World War 1 veterans. The bonuses, based on a soldier’s pay plus interest, could not be redeemed until 1945. That was Congress’ intent. But in 1932, in the black hole of the Great Depression, veterans were hungry, hopeless, and desperate. You’ve seen photos of vets selling apples on street corners. That year, veterans wanted their bonuses. They’d earned them. They needed them. They couldn’t wait 13 more years.

A group of WWI veterans marched to the nation’s capital to appeal for early redemption of the promised bonus. 17,000 soldiers plus their families and supporters eventually swelled to 45,000 people. The group was nicknamed the Bonus Army. In the summer of 1932, they squatted in tents in a makeshift settlement—a Hooverville—in the Anacostia Flats section of Washington.

A Bonus Bill was introduced to award early payment of the bonuses. In June of 1932, the bill was defeated by the Senate.  The Bonus Army had nowhere to go and no money to go there. They waited for President Hoover to act in their behalf. After all, they were veterans, not beggars. They’d brought their wives and children—their families. All they wanted was to receive what was due them, what had been voted on and promised, to honor them for participating in the war that was supposed to have ended all wars.

The Hooverville was a slum. Anacostia was a muddy, insect-infected swamp. There were masses of humans with no steady food supply, no plumbing, nowhere to dump garbage. Tension began to run high. The local police chief was sympathetic and encouraging, but flare-ups and small altercations broke out.

Finally, President Hoover acted. He instructed the U.S. Army to evict the Bonus Army out of the city.

The force that expelled the Bonus Army was led by General Douglas MacArthur. He was supported by a tank division led by General George Patton. Major Dwight Eisenhower was one of Patton’s aides. MacArthur, it has been recorded, believed that the veterans’ camp had been infiltrated and supported by Communists. He ordered the “eviction” be conducted with infantry wielding bayonets and cavalry on horseback, both supported by six tanks.

The eviction turned into a melee that turned into a riot. The veterans’ Hooverville was torched. The Bonus Army was driven across the river and out of the city. Three veterans were killed, 54 injured, over 130 arrested.

It was a publicity nightmare for Hoover. A year later, after he was defeated by Franklin Roosevelt, another contingent of Bonus veterans marched. FDR did not support their demands, but he did authorize a proper campsite and delivery of meals. In 1936 a Bonus Bill was passed to award the bonuses early.

If this bit of American history is news to you, don’t feel badly. There was no 24-hour news cycle in 1932. If there was, can you imagine a sitting President ordering an armed assault on U.S. veterans? The three military leaders became heroes in the next world war. That one didn’t end all wars, either. Nor did the Korean Conflict, or the wars in Vietnam, the Persian Gulf, Bosnia, Kosovo, Afghanistan, Iraq or Libya.

And in the skies over Dover, Delaware, C-40s continue to bring home the war dead.

You can no more win a war than you can win an earthquake.  ~Jeanette Rankin

Okay, Ramona, you have me in tears. I knew nothing about this tragic event in our country's history. Maybe the instant news we have today annoys me to no end with reporters reporting that they have nothing but speculation to report. But having read this, I'll take full coverage of nothing over no coverage of something despicable any day.

I'm only half-way through my first cup of coffee, so I hope that made sense.

Anyhow, thanks for a moving post. And thanks to ALL the veterans out there.

Good grief, I never knew about this, either. An armed tank division against veterans--and their families? They must have thought the world had gone mad.

God. Yeah, crying too. I had no idea.

Ramona -
Good post. I've been following the Dover story, too, and am appalled that any human remains would be unceremoniously dumped in a landfill; it is doubly appalling that these are the remains of war casualties dumped by the very people entrusted with their care. Usually the powers that be maintain the fiction that soldiers, veterans and fallen heroes are treated with respect, at least until the war is over and they go back to cancelling benefits and sending in the tanks.

To the Pennsylvanians, I had to cut this somewhat short, but will add a local tidbit here. After the Bonus Army was kicked out of D.C., the mayor of Johnstown, PA, Eddie McCluskey, offered the Bonus Army a place to stay: an abandoned amusement park outside of town. Some of the Army came, but it didn't even very well. The mayor ordered them to leave in August.

Gina, I can't tell you how upsetting these revelations are to people here. However, to clarify, it's not like bodies are being discarded in landfills. From the reports, there were bone fragments and/or other smaller body parts disposed of that way, without seeking permission from families. That's the biggest blunder. Not that any of it's okay, of course.

I think you are perfectly correct that our reverence for our soldiers is, at least to some degree, a fiction. We should do better.

It's appalling how little history is actually taught in public schools in this country. Oh we get bits about our founding fathers (believe me, not many of us today would identify with their total beliefs) and leave out all that truly affects us today. IMHO TWEEN, the time period between the World Wars, is where you can go to learn of changes that were so sweeping they were leveling.
FDR did try to think about the 'common man' (please do not equate that with the middle class of today) but even he had his limits.
I had not heard anything about the Dover scandal, but thanks for clarifying in the comments. Dumped bodies behind mortuaries was a big story out here twice, and that was my first mental vision.
Patg

Ramona -
Yes, I was aware that it was body fragments, etc. that were being disposed of. I can't imagine many families would consent to dumping their loved ones' bone fragments and small parts in landfills. If these fragments can't be linked to a specific individual, perhaps they should go to a common grave in a cemetery, not a landfill.

Wonderful post, Ramona. Just when you think the way we treat our veterans could not be any worse, more facts come to light.

Pat, I think the time between the two world wars is a fascinating period in history. When you consider the horrible weapons introduced in the Great War, followed by returning home to years of hunger and poverty, it's almost no wonder leaders were so reluctant to enter another worldwide conflict.

I think it's a great period for literature, esp. short stories.

I've always liked one detail from the story of Eleanor Roosevelt's visit to the Bonus Army: "Hoover sent the army, Roosevelt sent his wife."

Two of my great uncles served in World War I. One was gassed and, although he lived into his 70s, he was in ill health the rest of his life and was often unable to work. The other survived but never came home; after the war, his heavy drinking turned into alcoholism, and he wouldn't allow his mother to see him in that condition. He stayed in New York City and several years later died there by his own hand. I consider both men casualties of war.