Victim of the Query Shark

By Paula Matter
My very good friend Annette Dashofy knows how to keep a secret. She did not tell anyone about my plan to crash the Pennwriters costume party at the conference last weekend. *
As the official conference photographer, Annette took some fantastic shots. Go check out her blog to see some of them. http://annettedashofy.blogspot.com/ She sent me the following photos so I could upload them today. Thanks, Annette!

Earlier in the evening, I had begged agent Janet Reid to attend the party. Awesome person that she is, it didn't take much begging. Janet likes to make people think she's mean and tough, but a lot of us know better.
Yeah. I said it.
By the time Janet popped in, I'd been in that costume for about 15 minutes. Warm and stuffy. She showed up, I got the laugh I wanted. I couldn't wait to get out the costume.
Then someone dared me to traipse through the hotel lobby in my costume. Since I would've been the kid to stick my tongue on a frozen pole, I was off in a flash. Of course, there were two long hallways to go down before reaching the lobby. With parties and people everywhere.
I found friends in the lobby (and made some new ones along the way), and all I remember is the flash of lots of cameras. And shouting. And laughing. I loved every single minute of it. I live to make people laugh.

Except it was getting warmer and stuffier by the minute. I pulled off the costume and plopped down on a
bench. See the hat Annette is wearing? True friend that she is, she tossed it on my head to hide my sopping wet hair. I stuffed the shark in a bag and we returned to the party.
Someone offered to buy me a drink if I would crash the prom going on in the courtyard. That's all it took. The shark came out of the bag. Back down the long hallways, through the immense lobby, past the other parties.
Loud, very loud rap music was playing when I strutted into the courtyard. Giggles, laughter, high fives all around. There are no photos of this because Annette said she was laughing too hard.
The shark went back into the bag and I gulped down my drink. I went outside for some fresh air and met a woman who said she'd heard about someone dressed up like a shark. I admitted to the deed. She begged me to show it to her and her friend in the bar.
Back to the party where I pulled the shark out of the bag, walked down the halls, through the lobby and into the bar. Laughter, yadda yadda yadda. I shoved the shark into the bag, went back outside for some more fresh air.
After cooling off, and with my hair fairly dry, I returned to the party. I was told I was in the running for Best Costume. Or Funniest. Or Original. I offered to put the costume back on. Five of us stood at the front of the room with the party hostess. Ayleen Stellhorn, conference coordinator, was appropriately dressed as Wonder Woman. 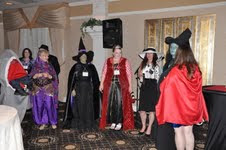 Here I'm being asked "Who are you?" My answer, "Victim of the Query Shark."
Winners were chosen by the volume of the audience's applause. My turn came and the response was overwhelming. The thunderous applause and cheers made up for all the overheating, stuffiness, and sweat.
Would I do it again? Only if someone double-dogged-dared me. Who am I kidding? I'd do it again in a heartbeat.
*I already did this in person, but a very special thanks to Ayleen for letting me crash her conference.
And just for fun.....
http://www.youtube.com/watch?v=XLAYvjaGGqM&feature=related
Posted by Working Stiffs at 6:07 AM

Paula, you really deserved the "best costume" award. I loved Janet's response when you said you were a victim of the Query Shark: "I want my fifteen percent!"

Paula, I have no idea why the pictures turned out blurry here. But it was great seeing you again. We'll be talking about the shark at the conference for years to come!

Awesome, Paula! You need to post your conference schedule (Land Shark appearance schedule) so I can be around for the next "sighting."

Annette, thanks for taking the pictures. Moments like that need to be saved in a photo.

This is great. Wish I could have been there!

Wish I could have seen it! That's hilarious.

And as someone else who knows Janet Reid, she's really a sweetheart when you get to know her. She once told me I had to give her & the agency 15% of any extra time I could scrounge up, too. The woman knows how to look out for herself.

And what will be your encore? I can't wait. Wish could've been there this year.
Maribeth
Giggles and Guns

Paula - this was priceless. So glad I was there to enjoy it in person!

Joyce, I heard Janet yell out something, but didn't catch it. Too funny! She is an absolute doll.

Annette, I dunno what happened. I'm glad the ones on your blog came out better!

Thanks, anonymous! Annette did a great job!

Hey, Carol, it was so much fun.

Paula, don't forget the two guys from the wedding who wanted a photo with the shark. They were pretty darn happy to begin with, but you made them extra so. And they have the cell phone photos to prove it.

It was a very entertaining evening, on several levels. I'm happy I was there.

Love the idea of the query shark. Looks like loads of fun!

Looks like great fun. Wished I could have been there.

Maribeth, I hope you can make it another year!

Tamara, I didn't get the chance to meet you. Glad you enjoyed yourself!

Oh, Ramona, I had forgotten about them! The one guy showed me the photo he'd taken. Good times.

M Pax, it was loads of fun!

L.J., I had a blast. Hope you can make it sometime.

I hope everyone can make it to a Pennwriters con sometime. They're great. Janet told me she wants to come back next year, and that Pennwriters rock.

Paula - I sat next to Gina when we had dinner with Janet. Sorry I didn't introduce myself. I will next time around!

That is the best costume ever!! What a great idea - and a great story :)

Paula, you are a hoot!
(owl costume next year?)
Thanks for the laughs!
(would you believe my word verification is quary -- I think the shark got the 'e'?)
This is going to be a tough blog to follow....:)

Paula, you can crash my conference anytime woman!